"Mathematics is not yet ready for such problems." This is what the mathematician John Conway reportedly said about the Collatz conjecture, a simple-looking, yet unsolved mathematical mystery. This week Plus hosted two intrepid work experience students, Sabrina Qian and Joe Dickens, who decided to have a go at this fiendish problem nevertheless. And they made some intriguing discoveries. Here is what they came up with.

What are hailstone sequences and what's the Collatz conjecture?

Starting with any positive integer n, form a sequence in the following way:

Now take n' as your new starting number and repeat the process. For example,

and n=25 gives the sequence

A sequence formed in this way is known as a hailstone sequence because the values bounce up and down just like a hailstone in a cloud.

When you experiment with different values for n you will soon find that every hailstone sequence appears to end up with the cycle 4, 2, 1, 4, 2, 1... and so on. Below we've plotted a few sequences starting with different numbers. 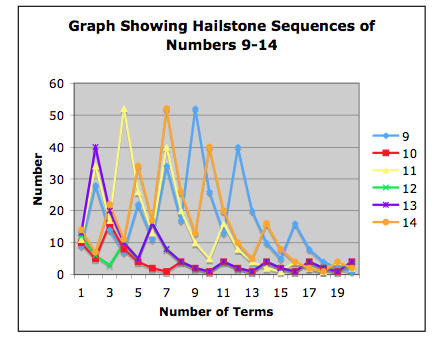 But can it be proved that every starting value will generate a sequence that ends up with the cycle 4, 2, 1? This is the unsolved problem known as the Collatz conjecture — no-one has so far been able to prove it.

What can we prove?

Suppose a simple recurring pattern contains the odd number n. Then 3n+1 must be a multiple of 2n. This is because you must be able to return to the number n starting from 3n+1 using only division by 2. In other words, we have:

where y is some positive integer.

Since y is a positive integer, the smallest it can be is 1. If y=1, then

3n+1= 2n.
This clearly cannot be true, because n is a positive integer, meaning that multiplying it by 3 will give a larger answer than multiplying it by 2. If we take the next lowest value of y, which is 2, we get the equation:

Solving this for n gives

If we increase the value of y, so that y is at least 3, we get

Another thing that can be proved is that there are infinitely many numbers which, when "hailstoned", will produce the recurring pattern 4, 2, 1. In fact, any number n of the form

n=2m,
where m is a positive integer, will generate a hailstone sequence which eventually settles on the 4, 2, 1 cycle. Clearly such a number n is even, so the first step in the hailstoning process is a division by 2 to get 2m-1. If m-1=0, then 2m-1=1, so we have reached our 4,2,1 cycle. If m-1 > 0, then 2m-1 is even, so the next step in the hailstoning process is also a division by 2. Repeating this argument shows that all the numbers in the sequence are even, so all the steps in the process are divisions by 2, so we eventually get down to 4, then 2, then 1. This is true for any positive integer m, which proves that there are infinitely many numbers which when hailstoned eventually settle on our cycle. However, this doesn't prove that every number, when hailstoned, produces a sequence settling on 4, 2, 1. If this seems strange, here's a simple analogy: there are infinitely many even numbers, but that doesn't mean that every number is even. 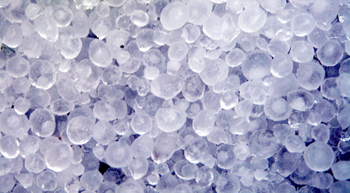 The first thing that we noticed was that after a while some doubles began to appear. Doubles was the term we used when two consecutive numbers took the same number of terms to produce their first 4. The first example of this was when we hailstoned 12 and 13, which both took 7 terms to reach their first 4. This was followed by 14 and 15, which both took 15 terms to reach their first four. Although the distribution of the doubles seemed random, they consistently appeared, and before long there were also triples, quadruples and even quintuples! Below is a list of all of the doubles, triples, quadruples and quintuples that we found when hailstoning the numbers 1 to 184.

Another curiosity is that all of the doubles consist of an even number followed by an odd number (rather than the other way around), and that most of the doubles seem to come in small groups. It also seems strange that there are more quintuples than quadruples — surely it seems more likely to have 4 in a row than to have 5 in a row? And finally, why are there so many doubles, triples, quadruples and quintuples? If they appeared occasionally, they could be passed off as coincidence, but the fact that there are so many indicate that there is some underlying mathematical explanation. If you know what that might be, why not leave a comment on the Plus blog?

Quadruples are more rare than doubles, triples, and quintuples. The first quadruple is:

The following website contains some other methods that could be used for proving the conjecture. They are not sufficient as a complete proof, but definitely worth trying out!

"But can it be proved that every starting value will generate a sequence that ends up with the cycle 4, 2, 1?" --

Hi,
Can the proof be something in this line?
We have already proved that for any n=2^m the sequence ends up with the cycle 4, 2, 1. Now need to prove that for any sequence S(n), where n is the seed of the sequence, there exists a subsequence S(m) belonging to S(n) such that m=2^p for any integer p. If n is odd then the next number in sequence is 3n+1=2q for any integer q. q can be even or odd. If q is odd then the next to next of 3n+1 in sequence is 3q+1 which is again even. If q is even it can be either written as 2^x for some integer x, in which case we have reached our subsequence or it can be 2y for some integer y, in which case we need to again proceed as above.
Following this line of logic I think we could prove our subsequence statement above. Does it work?

P.S: BTW why can't I post directly on the blog?

Its me again. Actually what I

Actually what I suspect is every Hailstone sequence has the subsequence 16, 8, 4, 2, 1 as its end.

I noticed a similar pattern, however, I took it out to 10, 5, 16, 8, 4, 2, 1. Not every sequence ends with this pattern, however, as the numbers have to be large enough initially. It would be interesting to play around with though to determine if the pattern continues.
Sarah

Hello, I think you are onto something...

May I ask the problem in another way. Is Collatz conjecture analogous to this question: In the sequence

Looking forward to your answer mathematicians

Qualititatively it seems obvious that a hailstone sequence will eventually hit a value of 2^m. However, this is not a proof.

It would be interesting to see the "coverage" of numbers in hailstone sequences. eg

I have deliberately omitted even numbers that reduce to already covered numbers and odd numbers that already appear in a hailstone sequence.

I have had another look at this and arrived at tthe following:

All even numbers will reduce eventually to an odd number. Hence we don't need to consider even numbers at all.

The 4n+1 type has the following sequence

Therefore the only types of odd number we need to consider are 4n-1 types.

I have some further analysis (eg 16m+7 always reduces when m is odd...), but I won't post just yet until I have more.

My way of thinking

Hi
I've been thinking of something like this: if you can prove there is no other recurring pattern (of all kinds), it's obvious that any sequence ends up with 4,2,1 (eventually it will get to 4 and then it's stucked).

It's easy to prove there are no others positive recurring patterns length of 2,3,4 end even 5 numbers. I think that if you continue with this line you will maybe find the desirable proof :)

Shouldn't it work for other sequences?

divide by two if it's an odd number

multiply by any odd number then add one

(the key is that you're adding 1, and that will inevitably reach a point whereby the number is 2 raised to some power)

Explanation for the doubles

I realized that if the hailstone sequences of two consecutive numbers took the same amount of steps to reach 4, then they must start coinciding (by this I mean that the sequences become the same) at some point. For any two consecutive numbers that do this, lets call them n and n+1, their sequences coincide after m steps. Therefore every consecutive two numbers of the form n,n+1 (mod 2^m) are a double. Also, if you remove every consecutive two numbers of the form 4n+1, 4n+2, the pattern might become clearer, because if 4n+1, 4n+2 is a double, then 3n+1, 3n+2 are.