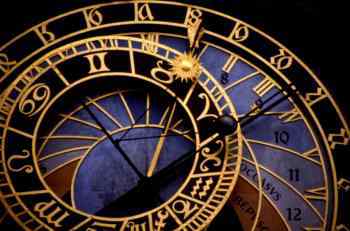 The astronomical clock in Prague

It seems that the telecommunications industry and the world of astronomy are on a collision course over a leap second, which is due to be added on to the end of this year. The International Telecommunications Union (ITU), which is responsible for coordinating world-wide computer networks, says that the extra second would confuse computers and could lead to communications chaos. But astronomers, represented by the Royal Astronomical Society, insist that without it they cannot maintain the accuracy of their observation and navigation equipment.

Since time immemorial, humans have measured time by the movements of celestial bodies. The most natural definition of a "day" is the period that elapses between two successive returns of the sun to a fixed position in the sky, which can be measured by a sun dial. But there is a problem: because the Earth's orbit around the Sun is elliptical, rather than circular, and because the Earth's axis is tilted with respect to its orbital plane, the length of a day, with this definition, varies throughout the year. This can easily be measured by observing how much sand trickles through a sand clock, or how much water flows into a vessel during one such "apparent solar day".

Clearly, time should not be allowed to behave in such a non-uniform fashion, and so humans introduced mean solar time. This is based on a hypothetical Sun, which lies in the Earth's equatorial plane, and around which the Earth moves with constant speed

. Viewed from Earth, the position of the real Sun coincides with that of the imaginary Sun on the March equinox, and so

is chosen so that both the real and imaginary Sun return to the equinox position at exactly the same moment. The means of calculating mean solar time, and how it differs from apparent time, were already known to the Egyptian Ptolomy in the first and second century AD. Following on from Egyptian and Babylonian traditions, one mean solar day came to be divided into 24 hours,

Mean solar time effectively deals with the problems arising from the Earth's elliptical orbit and axial tilt, but unfortunately, in the late 19th century, the time keeping community was shaken by the discovery that the Earth's rotation in itself is not regular. In fact, we now know that it fluctuates quite randomly. But Newton's laws of motion are based on regularly flowing time! A new definition of the time units was necessary. Luckily, Simon Newcomb had previously developed a formula for the motion of the Sun, based on observations from the 18th and 19th century. With the help of this formula, the length of the "tropical year" of 1900 - the period needed for the Earth to revolve once around the Sun - could be established, and the ephemeris second was defined to be the fraction 1/31,556,925.9747 of this length.

A sure-fire way of measuring the ephemeris second came with the invention of the atomic clock, which measures time by observing the oscillation frequencies within an atom. In the 1960s, astronomers found that an ephedermis second corresponds to "the duration of 9,192,631,770 periods of the radiation corresponding to the transition between the two hyperfine levels of the ground state of the cesium 133 atom".

Atomic clocks are incredibly accurate, and with these amazing devices time ticks away uniformly, one ephemeris second after the other. But unfortunately, the universe itself is not in tune with this kind of measurement: due to tidal forces, the Earth is continually slowing down. If we measure time strictly by atomic clocks, then the seasonal cycles which arise from the Earth's journey will slowly fall out of synch, and at some point in the future the sun will set at 5am. Moreover, atomic time will not tell astronomers much about the position of the celestial bodies.

And this brings us back to our leap seconds: to keep our atomic time in harmony with mean solar time, it is adjusted by a second about once every eighteen months. The hybrid time arising from this is called Coordinated Universal Time and is the basis for modern-day time keeping.

If and how the dispute between the ITU and the astronomical community gets resolved remains to be seen, but it's interesting to note that just over 420 years ago, time keepers were faced with an even bigger headache: due to inaccuracies in the Julian calendar, which was introduced by Julius Caesar in 46 BC, dates had slowly shifted away from the astronomical events with which they were traditionally meant to coincide. As a result, the Gregorian calendar was introduced in 1582, and to make up for the difference ten full days from that year had to be dropped. Just imagine what that would do to computers!