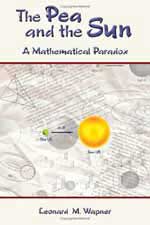 Hello!
I would ask you to reconsider the statement that as few as five pieces suffices. Indeed, Banach-Tarski proved that a ball can be cut up into five pieces that, when rearranged, gives two balls of the same size as the original. But, I claim, when you want to make a bigger ball, the number of pieces needed depends. The correct statement should be "A pea can be cut up into a finite number of pieces [...]." Even if the volume of the pieces cannot be defined, they are each contained in the volume of the original pea. They have what is called an "outer measure", which is not changed when you move them around. From five pieces of a pea, you could never get anything more than five times the original volume.

I'm just a Swedish master's student, so you do not need to trust me on this. But please check if you have made a mistake in your reading of the book.

All the best,
Lorents