Plus advent calendar door #24: The sagacity of bees

Honeycombs are made out of hexagonal cells. This makes them pretty to look at, but it begs the question of why. Why hexagons and not, for example, squares, or triangles? 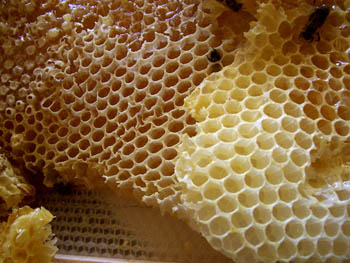 The answer is to do with the fact that the dividing walls between the cells are made out of wax, and that wax is expensive to produce for the bees. To make one pound of it, they would have to collectively consume about six pounds of honey and they would need to fly the equivalent of nine times around the world to collect enough pollen to make that much honey.

People have known this since at least 300 AD when the Greek mathematician Pappus of Alexandria wrote about it in On the sagacity of bees. Proving the statement mathematically, however, was another story. It took over 2000 years, until 1999, when a general proof was finally provided by the mathematician Thomas Hales. Mathematicians were overjoyed that the millennia old problem had finally been solved. What the bees thought of the proof we do not know.