These are exciting times for maths education in the UK. The long-awaited report by Professor Adrian Smith into post-14 mathematics education has finally been released, and, together with Mike Tomlinson's interim report on education and qualifications for 14-19 year olds, points the way towards some major changes to mathematics in school. Both reports are ambitious and exciting, and have met with a generally positive response (although see Post-14 post-Smith for news on some reservations).

Tomlinson's proposals could lead to an end to GCSEs, A-levels and all the other current post-14 qualifications, and their replacement by a single Diploma with many options, allowing far greater flexibility and personalisation for students in their later years at school. The proposals have enormous implications for maths education. To receive the Diploma, students will have to have achieved the equivalent of a good GCSE grade in "functional maths", along with ICT and communications - even if they are specialising in arts or humanities. Students who want to specialise in science would receive maths teaching right through till the end of school, but specially focused on supporting their science studies.

Although Tomlinson was not charged with looking at maths education in particular, much of what he says bears particularly on maths. His proposals, if implemented, would require considerably more, and more varied, maths teaching in schools. Which will be difficult, because as Smith's report points out forcefully, we don't have anything like enough maths teachers at present.

Smith found that "there is a current shortfall of around 3,400 specialist mathematics teachers in maintained secondary schools in England", and notes that "over 30 per cent of those currently teaching mathematics do not have a post A-level qualification in mathematics". He sees the shortage of specialist mathematics teachers teaching mathematics as the most serious difficulty in ensuring the future supply of sufficient young people with appropriate mathematical skills. Among the solutions he suggests are paying maths teachers more and increasing the amount of continuing professional development available for teachers.

We here at Plus feel that we have our own contribution to make. Teaching is a demanding job, and teachers frequently write to tell us that the most important thing for them is to keep their enthusiasm alive.

Education is not all about product in, product out, and it's not all about examinations and syllabuses, although it can seem that way sometimes. The teachers who have the most influence and are remembered the most fondly are those who clearly love their subject and are able to transmit that enthusiasm. If Plus can help more teachers to fit this model, we will be playing our part. 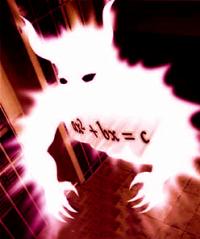 There is often talk of a democratic deficit here in the UK, but, as it turns out, unfairly. On 26th June 2003, Peter Bottomley, the MP for West Worthing, led a debate on the importance of the quadratic equation to life, the universe and everything. He was driven to this by the president of the teacher's union reportedly saying that students should be allowed to drop maths by the age of 14, and the example given of useless mathematics: none other than the poor old quadratic equation. You can read the full transcript of the debate in Hansard.

Sample quotes include: "I hope that you will forgive me, Madam Deputy Speaker, if I remind the House what an equation is, and then what a quadratic equation is." There is an explanation of the fact that the equation x2=2 has two solutions, one positive and one negative, and of the relationship between quadratic equations and the parabola.

Although the whole debate may seem surreal, the MP was making a serious point. He says that "to tell students that quadratic equations are beyond them, that they are about nothing and that educated people need have no inkling of what they are is to say that it is all right if they are so ill equipped to understand modern science that they cannot even comprehend its starting point."

To which Plus responds with a hearty "Hear, hear".

As regular readers may know, Plus is produced by the Millennium Mathematics Project, which also produces Nrich, the online maths club for all ages. Nrich has now had a great redesign, and the new site was officially launched this month with an event at the Royal Society. Each resource on the site has been "tagged" according to content and challenge level, making searching the resource bank easier. The site also provides clear links to the National Curriculum to help support teachers.