Postcard from the AAAS meeting in Vancouver – Days 1 and 2 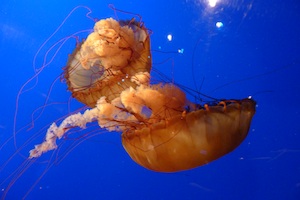 Rachel and Marianne at the Vancouver Aquarium

This week saw the opening of the Plus Canada office for the American Association for the Advancement of Science (AAAS) meeting in Vancouver. We were very excited to join the other 8000 delegates, speakers, journalists and exhibitors at the opening ceremony on Thursday evening. After a traditional welcome from Chief Jacob and his niece, from one of the First Nations local to Vancouver, Nina Federoff, President of the AAAS, told us her story in science. And it was quite a story: from taking college classes at 16, dropping out of school and having her first child at 17, she struggled her way through university as a single mother to finally become a world-renowned geneticist and molecular biologist.

We also heard from a number of other speakers, including our old friend Neil Turok, previously at the Centre for Theoretical Cosmology at the University of Cambridge but now Director of the Perimeter Institute here in Canada. Turok said that science and education will give us the tools to solve the problems facing the world today. And he suggested a new slogan for the meeting, "Seven billion minds", saying that the young people on the planet are our greatest resource and with our help will tackle these problems in the future.

Our first day was rounded off by a lovely dinner with jelly fish and dolphins at the Vancouver Aquarium. We met up with some of the other journalists from around the world, including visitors from Australia, Germany and Finland. You can listen to a quick podcast of our thoughts from the first day here.

Friday started bright and early with a Press Breakfast about Canada's relationship with the oceans and Arctic. Sherilee Harper from the University of Guelph is studying the relationship between weather, water and health and told us how climate change was already affecting the indigenous populations of Canada. For example, many people in these communities prefer to drink fresh brook water than treated water out of the tap. However her studies have revealed that bacterial levels in these streams increase sharply after heavy rains, which can be directly linked to increased clinic visits in the local communities for gastrointestinal illness in the weeks that follow.

We spoke to another of the panel members, Marcel Babin from the Université Laval, who uses satellite images to monitor the biodiversity in the Arctic ocean. His team also conduct experiments in the lab of how algal growth is affected by changing light levels. The mathematical models they produce can then feed into predictive models of how changing sea ice levels in the Arctic will affect biodiversity, and how this changing biodiversity will itself impact on climate change. You can listen to the podcast of our interview here.

Later on in the day we stayed with biomass, this time the 100 billion tons of it produced annually by plants through photosynthesis. Greg Scholes from the University of Toronto has been studying how plants do it. In his experiments he found that delicate quantum effects, which people didn't think could survive very long in the real world, played an important role in photosynthesis, a discovery which may opens the way for the new field of quantum biology. You can read our article of Scholes' work here.

And of course this was only a handful of the myriad of topics on offer on Friday. We also managed to catch a session on how topology is saving the day when it comes to analysing large datasets, particularly in biology. And we caught up with the latest news from CERN and Fermilab: they should have definitive evidence of the existence or non-existence of the Higgs by the end of the year (you can read more on the Higgs Boson and the LHC here), and experiments to try to replicate the faster-than-light neutrino results from the OPERA experiment are already under way with results expected this Summer.

Permalink Submitted by Anonymous on February 19, 2012

how did the dolphin taste? ;)