More than a century after the death of its inventor, the world's first computer printer has finally been constructed at the Science Museum in London.

Charles Babbage (1791-1871) was a British inventor and mathematician. In 1821, frustrated by the many errors he found in hand-calculated mathematics tables, he began to think about mechanical methods of calculation. This led him to design a series of "engines" for mechanised arithmetic and computation.

In 1985, the Science Museum's then Curator of Computing, Doron Swade, decided to construct a complete Difference Engine according to Babbage's original specifications. Difference Engine Number 2 was completed in 1991, just in time to celebrate the 200th anniversary year of Babbage's birth. It consists of 4,000 individual parts and weighs in at a hefty three tons - no substitute for your pocket calculator!

In April of this year, the Science Museum unveiled its latest addition to the Babbage project - a mechanical printer, again built to Babbage's own design, to complete the Difference Engine construction. Almost as complex as the actual engine, the printer consists of a further 4000 parts and weighs nearly 2.5 tons. 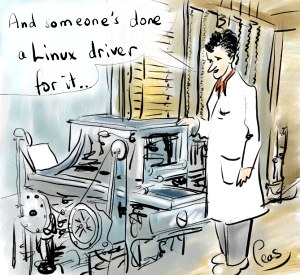 The wholly mechanical Babbage printer, which automatically prints the results of Difference Engine calculations, is remarkably advanced. It is possible for the user to adjust printing parameters such as the line height, margin widths and number of columns. The printer prints in two fonts simultaneously, and even produces so-called "stereotype plates" that can be used in a conventional printing press.

All those involved in building the two Babbage machines have been amazed by how smoothly and accurately they work. Doron Swade, who has recently published a book about Babbage's quest called The Cogwheel Brain, is more than happy with the success of his project. "Babbage's reputation has been vindicated, both as a visionary of the computer age and, more specifically, as an engineer of the most extraordinary calibre."

The Babbage Pages
A growing site about Charles Babbage from the University of Exeter.