The recent tsunami caused by an underwater earthquake near Sumatra has reminded us of the dangers we face from earthquakes. But although we may be powerless to stop natural disasters from happening, much can be done to save lives next time the earth moves.

Fortunately the devastating tsunami in December was a relatively rare occurrence: the last major tsunami to hit the Pacific was in 1964. But earthquakes kill thousands of people every year, with most dying when buildings collapse, says Dr Adam Crewe of the Earthquake Engineering Research Centre (EERC) at Bristol University. Although there has been progress in predicting earthquakes, he says it is still better to design buildings that either withstand earthquakes or fail "safely" than to rely on prediction. "If we could do something about this we could save many thousands of lives per year."

Buildings can fail in several ways during an earthquake, depending on the nature of the quake, the ground conditions and the design of the building. As the earthquake makes the ground vibrate, the building shakes, causing damage to its structure. As a result, it may crack and parts of it may collapse, sometimes even with entire floors disappearing - known as "pancake collapse".

For example, in a simple building the bottom of the structure is moved sideways, while the top of the building is delayed momentarily due to inertia and then follows, resulting in the building swaying backwards and forwards. The frequency with which the building vibrates (the number of times it sways per second) depends on the earthquake - in general, tall buildings shake more in low frequency earthquakes, shorter ones more in high frequency earthquakes. This is because each building has its own natural frequency at which it will resonate most strongly, just as a musical instrument does. Also, each building can vibrate in several modes, "like different musical notes we get out of an instrument" says Crewe, with a natural frequency associated with each mode. (For more information see Natural frequencies and music in a previous issue of Plus, and the IDEERS site.)

The natural frequency for a certain mode,

depends on the stiffness

of the building in that mode and on its mass

). The height of a building has a great effect on its stiffness, with taller buildings being more flexible and therefore having lower natural frequencies. The closer to a building's natural frequency the frequency of the ground's movement in an earthquake, the more strongly the building will vibrate. As a result, earthquakes can be very selective in their destruction. For example, in the 1985 earthquake in Mexico City 8-10 storey buildings were badly damaged, while shorter and taller buildings fared better.

Although making buildings very strong would mean they were less likely to be damaged in an earthquake, this would be very expensive and is often not feasible. Instead, earthquake engineers such as Crewe are developing building methods that will minimise the damage when earthquakes occur, and, in the worst case scenario, ensure that buildings fail in a controlled way so that the people inside can escape. 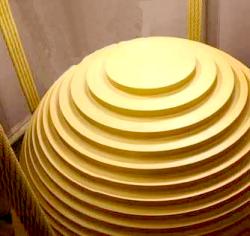 One method is to install damping, a mechanism that absorbs the energy of the vibration and makes the movement die away over time - with effective damping the movement should die out after only a few vibrations. One type of damping, called a tuned mass damper (TMD), involves installing a huge mass, either mounted on springs or as a pendulum, which is "tuned" to have a natural frequency close to that of the building. In the event of an earthquake at close to that resonant frequency, the TMD oscillates in the opposite direction to the building, counteracting its motion. The world's tallest building, the recently opened Taipei 101, has a massive 650 tonne sphere suspended from its 92nd floor to protect it against wind vibrations (a serious problem for tall buildings) as well as earthquakes.

Buildings can behave in unpredictable ways, and Crewe and his colleagues are using experiments and mathematical modelling to understand better how structures will react to earthquakes. They hope that methods developed for making buildings safer can be used not only in new buildings, but also in important existing buildings like hospitals, and even in buildings of historical importance. So although we may never be able to prevent earthquakes completely, as we learn more about how buildings fail we should still be safer in the future when the earth moves.