Judging by their self-confident lyrics about women and wealth, rappers consider themselves quite a special bunch. And now it's been proven mathematically that indeed they are, at least as far as their interaction network is concerned. An analysis of the network you get by connecting any two rappers that have performed together shows not only a remarkably close-knit community, but also another feature rarely found in naturally arising networks. 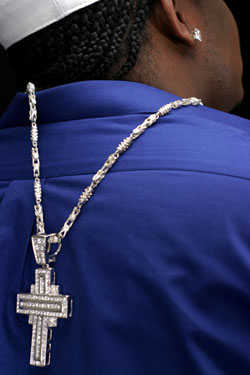 Most networks are remarkably similar in terms of the pattern made by connections between different nodes. Everything from the Internet and neurons in the brains to the network of biochemical reactions within cells seems to be built with the same basic underlying structure.

One of the first large webs to be studied was the network of human social interactions. How often do you remark "what a small world" when you realise that someone you've just met on holiday lives next door to one of your best friends from school? In the 1960s the American sociologist Stanley Milgram set out to investigate the nature of the surprisingly close-knit human world. You'd expect people living in the same town to know each other, but why is it that complete strangers are often able to quickly find a common link between themselves, such as a friend-of-a-friend? Milgram tested this by setting volunteers the task of sending a letter to someone completely unknown to them on the other side of the country. He instructed them to simply post it to someone they did know that was probably closer to the target, and ask them to do the same. In this way, when the letters finally arrived at the recipients, Milgram could see how many steps through the social network they had taken. His results are now well-known as the idea of six degrees of separation or small world phenomenon: every person on the planet is on average only six steps away from any other person. Although Milgram's experiment was not representative of the whole human population, there are rigorous mathematical results confirming that the true degree of separation is indeed very low.

Many other social interaction networks have been analysed since this classic experiment. One very famous example is the network of maths publications. The late Paul Erdös was one of the most prolific mathematicians who published around 1,500 research papers over his career. The 502 mathematicians that have written a paper with Erdös are directly connected to him in the network, and so are said to have an Erdös number of 1. When you add another degree of separation, i.e. researchers who have written a paper with someone who is themselves directly connected to Erdös (an Erdös number of 2), then 337,000 people are included. The game six degrees of Kevin Bacon works along identical lines, whereby the object is to try to connect him to any given actor with as few steps as possible. Here, a connection on the network is made if two people appeared in the same film together. A great aid to this game is the Internet Movie Database (IMDb), which allows you to browse through many actors' filmographies. In fact, Kevin Bacon, despite being the eponymous actor of the game, turns out not to be the best connected actor. According to the IMDb, Rod Steiger is the true centre of the film world, being on average 2.68 steps away from all other actors, compared to Bacon's 2.96.

The diameter of a network depends partly on how many connections each of the individual nodes make. As with other human networks, rappers regularly collaborate with each other, bringing the whole web closer together into a tight community. But rappers are particularly collaborative — performers frequently make guest performances on each other's albums, producing an especially well-connected network. In this way, modern day rap is much like the early years of jazz, when musicians had less than two degrees of separation. However, the rap network is different from many of the others mentioned above in terms of a property called assortativity.

Assortativity measures the extent to which links exist between highly connected nodes and those much less connected. In assortative networks, well-connected individuals tend to be linked to each other. This makes perfect sense in most social networks — someone who is particularly sociable and friendly is very likely to also know the other most sociable people. But for some reason, the rap network has a very low level of assortativity — the most prolific rappers do not on the whole appear on each other's albums. One reason Smith suggests for this is that the rap market is highly competitive, and successful artists may be reluctant to help the sales of their adversaries. Smith thinks though that the full explanation goes deeper than simple commercial interests. The rap world is known to be fraught with particularly deep rivalries. Artists are often heard challenging and taunting each other on their records, and enmities in the past have escalated to violence and even murder. One particularly notorious rivalry arose between Death Row Records in Los Angeles (the "West Side") and Bad Boy Records in New York (the "East Side").

Perhaps though, the real reason is more positive. Successful rap artists may be keen to help newcomers establish themselves by singing with them on their recordings. Such a bias to work with poorly-connected individuals, rather than actively avoiding collaboration with other successful artists, would also create a low assortativity over the network.

Read more about...
network
mathematics in the media
social networks
Tweets by plusmathsorg