A rare view of Venus

Venus is about to catch up with Earth again as the two planets do their cosmic laps around the Sun, and the view will be better than at any time in the last 122 years. On June 8, Venus will pass directly between us and the Sun, offering both amateur and professional astronomers the chance to measure our solar system and to perfect methods for detecting Earth-like planets elsewhere in the universe.

Venus circles the Sun every 225 days on an orbit that is tilted with respect to Earth's orbit by about 3.3 degrees. This means that, while Venus laps Earth about every 584 days, it is usually at a point in Venus's tilted orbit that is outside Earth's orbital plane. It is much rarer for this pass to occur near to where the two orbits intersect, but when this does happen - when Venus crosses the straight line between Earth and the Sun - it is called a planetary transit. In fact, no one alive has ever seen a Venus transit - the last one was 122 years ago. 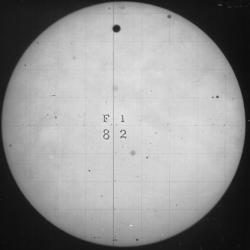 Photograph taken of the 1882 transit - Venus is the large dark spot near the top of the sun.
Image from NASA

Previous transits of Venus and Mercury were used by 18th century astronomers to calculate the average distance between the Earth and the Sun, defined as one astronomical unit (AU). This measurement, together with Kepler's laws of planetary motion, form the basis for our understanding of the scale and structure of the Solar System. Although we now have much more accurate measurements of this distance, thanks to radio signals bounced back by spacecraft (1 AU = 149,597,870,691 m), the European Southern Observatory's VT-2004 program is using the June 8 transit to offer us all a chance to participate in a re-enactment of history and measure this fundamental unit for ourselves. 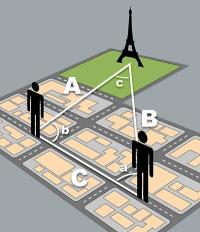 Using a method familiar to surveyors here on Earth, astronomers will calculate the Earth-Sun distance by using observations of the transit from different locations. Triangulation is a way of calculating the distance to some remote object, without directly measuring the distance itself. For example, if two people stand several blocks apart on a straight road in Paris looking at the Eiffel Tower, it will appear to lie at a slightly different angle for each person with respect to the road - an effect called parallax in astronomy. To calculate their distances from the tower, they construct a triangle with the road as the base, each observer standing at a corner at either end, and the tower at the triangle's apex. Then, if they know how far they are from each other and can measure the angle from the baseline to their views of the tower, they know two angles and the length of a side of the triangle and can calculate their distances from the tower. Similarly, to observers at different points on Earth, Venus will appear to cross the border of the Sun at slightly different places and at slightly different times. By many observers noting the times of Venus passing in front of, and then away from, the face of the Sun, the parallax and hence the distance from the Sun can be calculated. 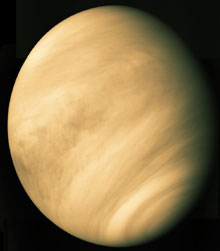 Although they explain the full calculations on their website, the people behind VT-2004 are making it even easier by asking anyone observing the transit to contribute their observations - they will then do the hard work of calculating the Earth-Sun distance using all the contributed data. (Although the transit will be visible to the naked eye, it is important never to look directly at the Sun - see http://www.vt-2004.org/safety/ for information on how to observe the transit safely).

But this isn't just a fun opportunity for the general public - astronomers are looking forward to the chance to learn more about planetary transits, which are turning out to be a vital tool in the search for other planetary systems. Most planets outside our solar system have been found using the "wobble" induced in a star's rotation by the planet's orbit. But in the search for Earth-like planets - planets of a similar size and mass to our own - this method is not as useful, as the wobble produced by these smaller planets is often too small to detect. However, planets have been spotted by using transits: as a distant planet moves between the star it is orbiting and us, the dimming of the star's brightness can sometimes by detected by current equipment. In fact two more planets have just been discovered using this technique. (Read more about spotting planets using stellar wobbling and transits in a past news story on Plus.)

It seems that the Venus transit of June 8 will give us a chance to connect, not only with the history of science, but with its future as well, and our ever-deepening understanding of the universe we live in.

Read more about the Venus transit on June 8