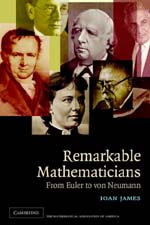 For these or other reasons, people tend to see mathematics as a series of discoveries without a face. Ioan James' book Remarkable mathematicians is first and foremost a wonderful journey through mathematics where we finally discover who did what. Almost equally importantly, we discover other contributions of mathematicians we already know: Kronecker cannot have worked only on the delta.

The book consists of ten chapters with six mathematicians in each. In works of this kind it may seem crude to count how many pages are given to each character, but it is often telling of the author (Russell in his History of western philosophy dedicates three times as many pages to Locke as to Hegel); in James' book one feels that some sort of symmetry had to be preserved as pretty much the same number of pages - ten - is given to each mathematician, whether Gauss or Alexander. This results in the level of interest varying rather from chapter to chapter.

Despite this, some chapters contain truly enjoyable little anecdotes. Many people know Laplace's answer to Napoleon when the latter asked why there was no mention of God in his treatise: "Sir, I do not have need of that hypothesis". Few know that Lagrange added, "Ah, but that is a fine hypothesis. It explains so many things." Many of us have wondered why there is no Nobel Prize for mathematics: James tells us that it is because Alfred Nobel wanted to make sure that Mittag-Leffler would never win it and therefore preferred to scrap the category altogether. On a more technical note, I now know that it is to Weierstrass that we owe analytical continuation, and it is in providing this sort of information that the worth of such a book truly lies. I would have liked a few words of explanation for the many mathematical terms mentioned, but this is not the case except for the incredibly many spent, for some reason, on elliptic functions.

The main potential criticism is of course a debatable one: was the choice of mathematicians justified? I think that there have been some serious omissions in favour of some less known characters such as Alexander, Smith or Sylvester. Why not mention Green, Lobachevsky, at least one out of Ricci, Peano, Volterra and Levi-Civita, and finally, Mandelbrot?

But anyone who knows a reasonable amount about mathematics will find this an enlightening book, and will surely enjoy the chance to meet and get to know in more depth the great characters of mathematics.

Biagio Mazzi has just completed a PhD in applied mathematics at the University of Cambridge. His research focus is on the relation between turbulence and fractals, in particular the idea of creating a turbulent flow with a fractal-like structure.
Tweets by plusmathsorg