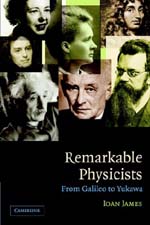 Remarkable Physicists: From Galileo to Yukawa

In our day-to-day lives we all use, and are in fact dependent on, physics. For example, all of modern (and not so modern!) technology relies on our knowledge of underlying physical principles. However, physics is also one of the most commonly feared sciences, with many people put off by the complex details which have developed alongside the subject's sophistication.

In this book, James sets out to provide an account of the development of modern physics that is suitable for everyone, regardless of physics background. He does this by focusing on the people who made the breakthroughs, rather than the breakthroughs themselves.

Short life-stories are given for fifty key figures born between 1564 and 1907. The sheer variety of those profiled is striking, ranging from household names, such as Galileo and Newton, to lesser-known physicists such as Bragg and Lord Cherwell. There are nobles and those who knew poverty; those who died tragically young and those who lived long healthy lives. Between them they have contributed to the many areas of physics which make it the diverse subject it is today. They have also contributed to the development of physics teaching. For example, Kelvin was responsible for the first teaching laboratory in Britain, having seen such a thing in Paris.

At times (due to the sheer volume of information) the book can read like a list of dates and places, but there is a lot more besides. For example, James has attempted to convey the personalities of his subjects (from the reclusive Cavendish to the womanising Schrödinger) and how they related to each other and the world around them. It is fascinating to read their accounts of each other. There are also some surprising facts: Kepler, despite describing astrology as the foolish step-daughter of astronomy, supplemented his low income by casting horoscopes and writing calendars.

Few physicists could escape being caught up in politics at some level. The effects of the second world war on the scientists of that time were immense. In this book, there are those forced to leave their research jobs in Germany, those who defended them and those who found new jobs for them. Even those not as directly involved were hindered by severe restrictions on sharing information and travelling.

Naturally, physical concepts and techniques are mentioned, but the details are not given. They serve to keep the physics reader involved without alienating readers with little or no physics background. In short, this book is suitable for those of all levels. An interest in the development of physics is sufficient to make it a good read.

In a short epilogue, James expounds upon the many differences between this book and the companion volume, Remarkable mathematicians (reviewed in issue 27 of Plus), and also makes a comparison between the subjects of the two.

Jenni Smillie is just beginning a PhD under Prof B.R. Webber at the Cavendish Laboratory, University of Cambridge. She is researching particle physics beyond the Standard Model.