The Millennium Mathematics Project, the family of programmes that includes Plus, has won the Queen's Anniversary Prize for Higher and Further Education. The award, announced on 17 November at St James's Palace, is the highest national honour for achievement in the higher and further education sector. 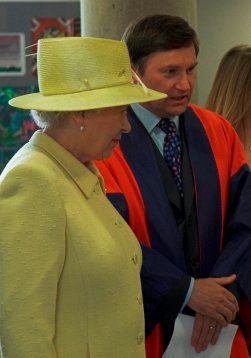 Professor John Barrow, MMP Director, explains Roadshow activities to the Queen during her visit to the university in June.

The Queen's Anniversary Prize is awarded biennially to UK universities and colleges for work of exceptional quality and of broad benefit either nationally or internationally. Ruth Kelly, Secretary of State for Education and Skills, said: "I would like to congratulate the winners of The Queen's Anniversary Prizes for Higher and Further Education. They clearly demonstrate that we can be proud of our educational institutions and of the expertise and commitment to excellence of those who teach in them."

The award has been warmly welcomed by the Millennium Mathematics Project (MMP) and the University of Cambridge, where it is based. John Barrow, the Director of the MMP, said: "I am delighted that the Millennium Mathematics Project has been awarded the Queen's Anniversary Prize. This is a tribute to the vision of those in the University who initiated this project, those in the outside world who added their support for it, and all the members of our dedicated Project team who have made such a wide-ranging impact in schools and amongst the general public. This Prize is also a welcome confirmation of the vital importance of mathematics to the United Kingdom."

The MMP aims to support maths education in schools throughout the UK, particularly through enrichment and extension activities that promote the development of mathematical skills and understanding, and to increase the mathematical awareness and understanding of the general public. The MMP was launched in 1999 as a joint project between the Faculties of Mathematics and Education at the University of Cambridge.

Plus magazine complements those MMP programmes aimed directly at school students, such as NRICH and Motivate. We are a free online magazine for the general public with feature articles, news and comment about the beauty and practical applications of mathematics to science, the arts and society. The Plus site also includes a digital careers library and a mathematical news service.

Uniquely in the field of education, these prizes sit within the national honours system. Names of the prizewinners are put forward to the Prime Minister, who advises the Queen and seeks her assent. The formal presentation of the award by Her Majesty the Queen will take place at Buckingham Palace in February 2006. The prizes originated as part of the commemorations for the fortieth anniversary of the Queen's accession to the throne.

The Awards Council look in particular for "initiative, innovation and originality" that benefit the wider community. The MMP's activities have a significant regional, national and international impact, and MMP resources have been repeatedly commended by the Department for Education and Skills. Individual projects have also received national and international recognition, including an Educational Provider of the Year Award for NRICH, and a Webby - the Oscars of the internet - for Plus.

So while Plus, along with the rest of the team at the MMP, is enjoying celebrating the honour, we are also looking forward to continuing to celebrate mathematics every day with our readers.