The secret club of diverse triangles 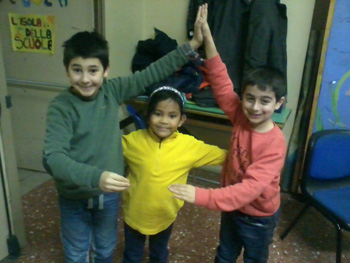 Our main aim was to get the children away from rote-learning: we tried to help them approach basic mathematical problems in more creative ways. The workshop also had positive and unexpected effects on the children's behaviour.

The idea came as a sort of natural consequence of our passions. We both read mathematics at university; after a masters degree, Fabrizio became a teacher in a high school in Rome, and Giulio started a PhD programme in pure mathematics. At the same time, we both spent our free time doing theatre. After many conversations, we decided that the time had come to mix up our passions.

The workshop started thanks to a collaboration with A.N.I.T.A., a parents' society at the G. Garibaldi primary school in Rome. We had six afternoon meetings, the first two about triangles, two more about fractions and the last ones about rigid motions of the plane.

During the first two meetings our main goal was to convey the multitude of geometric shapes that go under the name of "triangles". Usually children, in fact most people, tend to associate only very symmetric shapes to the word "triangle": such as isosceles or right-angled triangles. This can prevent them from fully understanding the meaning of theorems about triangles, and the importance of giving proofs. For example, Pythagoras' theorem makes a claim about every right-angled triangle, not just about a specific one. To grasp the importance of Pythagoras' theorem, one has to have many examples of triangles in mind. Once we have a variety of examples, it should also be clear that the result cannot be regarded as obvious but that it deserves a proof.

To this end, the first exercise we proposed was to reproduce with the body, to "put on the stage", some (non-symmetric) triangles. The children were grouped in teams of three. First, each team had a different triangle; then we asked everybody to copy the triangle of a given team. An important feature of these activities is that the co-operation involves physical contact among the children; this is also particularly useful in improving relationships within the class.

The second session was about classifications. From a strictly mathematical point of view, given a set of objects, say a set of triangles, to define a classification means to divide the elements of the set into groups. During our lesson, each child was given a triangle, and we asked them to form groups according to their triangles. We did not indicate any clues or criteria for how to this. Classification is a very creative activity in mathematics, it involves spotting features that may be hidden to the first glance — and indeed we asked the children to be creative. The most amazing classification was "the club of diverse triangles": two children who decided to club together just because their triangles were very different. During the second part of the lesson, we proposed a few criteria, such as "being equal", "having the same shape" or "having the same area". What really surprised us was that the children were well-acquainted with the concept of shape, but struggled a lot in classifying the triangles according to their area. 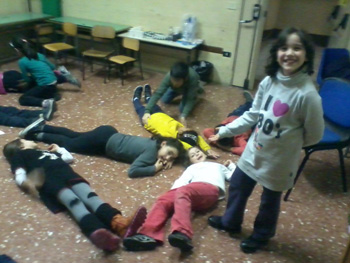 When the children were at ease with the theatrical exercises we introduced rigid motions on the plane. We started off by asking the children to form a circle, and then we started moving around trying not to alter the circle's shape. This was an opportunity to speak about translations, rotations, symmetries and scalings: in other words, the ways to move objects in the plane without altering their shapes. We repeated the exercises in small groups: a group was asked to make a "statue" — to represent a figure, such as a happy person, and remain rigid. The second group had to indicate to the first how to move without changing the shape of the figure.

The last exercise was called "the puppets": in pairs, a "director child" had to translate and rotate a "puppet child", without changing his or her posture. We wanted to make the children aware that motions can be considered as objects on their own, which can act on everything in a space, not something related only to geometric shapes. This, we think, is a key idea in modern mathematics: roughly speaking, there are groups of operations, such as the transformations of the plane, which can act on sets, such a set of triangles. This idea has had an enormous impact in mathematics over the last two centuries. In future we hope to also use this idea on the stage of a theatre.

The last, and probably one of the best, rewarding moments we experienced in these activities was when a child shouted

It was her own invention of a word, "scommute", to describe non-commutativity: if we change the order of composition of two motions, the result changes.

Let us finish by saying a few more words about the theatrical side of the workshop. We proposed a number of classical theatre exercises; these were particularly useful to improve concentration, attention and co-operation. For example, we started every meeting with the "presentation with a movement". We made a circle, and, one by one, each participant had to say her or his name while performing a movement. Then, the others, all together, had to repeat the same movement and greet her or him. This kind of exercise is particularly powerful in unveiling the attitudes of the children. An even more powerful exercise was "the puppets" explained above. To ask a child to use a classmate as a puppet has surprising emotional effects. An example is that, during these activities, the children who are more aggressive in the class room usually get completely stuck. Leading the group in a very simple activity using their bodies turns out to be a big challenge for them.

This project would not be possible without the help of many people. In particular, we would like to thank Luciana Rimedio and the parents' society A.N.I.T.A. for the organisational support; Sara Borri, Lorenzo Conato and Giulia Salustri who joined us during a few of the workshops; and Alessia Cristofanilli, Giuliano Spirito and Paola Supino for stimulating conversations. We thank the primary school G. Garibladi and the I.C. Via Ceneda for their hospitality. Above all, we thank the children for their participation and their enthusiasm.