Secrets of the Universe — where size really does matter 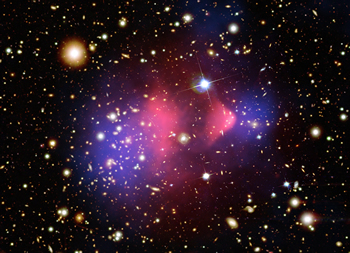 The next few years are going to be very exciting for physicists and mathematicians alike, as the most powerful technologies ever created are brought online to help us test out theories and probe the very foundations of the Universe.

Physicists have to rely more and more on mathematical models in order to solve theoretical problems. Of course, to a degree this has always been the case, but as our understanding of the Universe becomes clearer, it becomes increasingly difficult to make observations with fine enough detail to test mathematical models.

One of the biggest mysteries in particle physics at the moment is that we still don't exactly know what mass is and where it comes from. According to current theory, there are 12 fundamental particles interacting through four fundamental forces (see Plus article The physics of fundamental particles). These forces act through different kinds of force-carrying particles. Although theoretical particle physics does contain an explanation for mass and the gravitational force that acts on it, this explanation assumes the existence of a certain particle called a Higgs boson. This particle, however, has never been observed, partly due to the fact that it can only ever exist for the smallest fraction of a second before decaying into other types of particles.

Another huge problem with our current theories of the Universe is that we have only accounted for around 4% of it. The other 96% are thought to be made up of dark matter and dark energy (see Plus article New light shed on dark energy), and currently no-one has the faintest clue what either of these two really are. Scientists have observed that many astronomical objects have far greater mass than we would normally predict. Dark matter accounts for this missing mass and should make up for around 22% of the Universe's mass. On the other hand, dark energy is used to explain the acceleration of the Universe's expansion, which so far is not accounted for by any theory. Dark energy is thought to make up around 74% of the Universe. (We use the term "dark" to mean that something is undetectable because it doesn't give off electromagnetic radiation. Our only hope to detect anything that is dark is to observe its gravitational effect on things around it.)

So — around 96% of the Universe we have absolutely no understanding of and we can barely even detect what it's made of. Although we do understand the other 4% quite well, we don't understand why it has mass at all. And these are just two out of many very important questions about the fundamental nature of our Universe. Mathematically, there are many current theories that are trying to go some way to solving these problems. These include string theory, quantum loop gravity and non-commutative geometry (see Plus articles Tying it all up and The nature of space and time), but whilst these theories contain a great deal of elegant mathematics, no theory can be accepted until there is experimental evidence to support their claims. 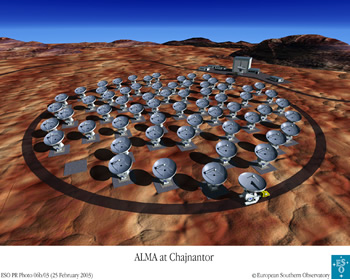 Scientists know that the conditions of the Universe shortly after its birth in the Big Bang can give vital information on its present state. Luckily we can look back in time: since light travels at a finite speed, a mere 299,792,458 meters every second, the further away we look, the further back in time we see. One of the key areas of interest is probing the cosmic microwave background; a faint glow of radiation produced when the Universe was one thousandth of its current size and had a temperature of a few thousand degrees. The most powerful observations are made with radio telescopes which work very much like everyday telescopes but instead of detecting visible light, they detect radio waves. Currently, astronomers and cosmologists use the Very Large Array (VLA) in the USA. But construction is underway on the largest and most powerful array of radio telescopes ever, which will hopefully allow us to look even deeper, in greater detail, into distant astronomical objects.

Going by the name of ALMA — The Atacamer Large Millimeter Array — this array will consist of around 64 twelve metre antennas all working together, located in Llano de Chajnantor, Chile, at 16,400 feet above sea-level. The array will be able to give spatial resolutions around 10 times better than the VLA and the Hubble Space Telescope. Construction has only just begun on the array and it is not due for completion until 2012. When it is complete it will not only help to shed light on dark energy and dark matter, but will also aid in the search for planets in other solar systems and the study of star and planet formation.

If you can't wait until 2012, though, you're still in luck. In 2007, the Large Hadron Collider (LHC) at the CERN facility in Geneva, Switzerland will be switched on. The LHC will be the world's most powerful particle accelerator. 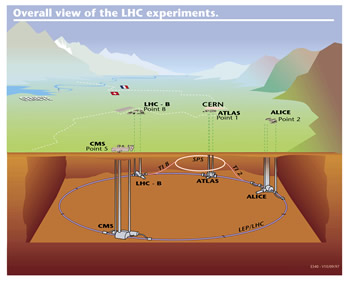 The LHC is 27km long and sits 100m below the surface. Credit CERN.

Particle accelerators work by producing two beams of particles which are accelerated using magnets to speeds approaching the speed of light. The particles are then collided inside the accelerator, producing new particles that can be studied by scientists. To see the most fundamental particles you need to use extremely high energy. The LHC will be able to collide particles with a collision energy in excess of 1000 TeV (1 Teraelectron volt, TeV = 1.60217646 x 10-7 Joules). This is equivalent to taking the kinetic energy of an aircraft carrier travelling at 30mph and squeezing it into a beam smaller than the zero on a twenty pence piece. At this energy, scientists can simulate conditions of very high energy, similar to those a billionth of a second after the Big Bang.

The collider itself is 27km long and sits 100m below the ground. It has taken seven years to complete. The accelerator will hopefully help to solve many problems, but physicists are most excited about detecting the Higgs Boson as it would have profound implications for our picture of particle physics.

So whether you plan to prove your mathematical model of the Universe by looking to outer space, or by probing the heart of matter, you will soon have the most powerful tools ever created to do just that.