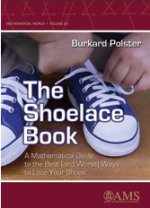 The shoelace book: A mathematical guide to the best (and worst) ways to lace your shoes

How do you do it? Horizontally from side to side, or perhaps criss-cross, producing a series of Xs running up your feet? Towards the end of The shoelace book, its author Burkard Polster raises a troubling question. Despite all the here-today, gone-tomorrow vagaries of fashion, and in spite of the huge variety of shoe styles available to us in this golden age of footwear, why does almost everyone lace their shoes in one of these two ways? The book is a short introduction to Polster's work to prove the strength and utility not only of these "classic" styles of lacing your shoes, but of many other styles besides. Indeed, the sorts of questions Polster addresses include "What is the shortest way to lace your shoes?", "What is the strongest way to lace your shoes?", and "How many ways are there to lace your shoes?" These types of questions are perfectly good mathematical questions, provided that you have formulated a mathematical theory of lacing shoes.

A mathematical theory for lacing shoes? What would such a thing look like, and why would one formulate it? We'll come to the interesting if fairly elementary mathematics behind the theory soon, but the main success of the book lies in illustrating how to find the hidden mathematics in our everyday world, and how to cast a vague question into firm mathematical language. The first step is to simplify the situation as much as possible without losing its essential features — a model, as such a mathematical setup is called, should be as simple as possible but no simpler, said Albert Einstein. Einstein had weightier things on his mind, but in the case of shoelaces, we assume two equal columns of eyelets, each with a label to help us talk about it. Through these eyelets runs a continuous loop of mathematical string. In other words, we join the dots of the two columns so that every eyelet has two line segments which end in it, forming a closed path which takes in every eyelet.

Does this ring true with our intuition? Yes: when we lace a shoe the shoelace goes into a hole and then out the other side — that's the two line segments — and when we tie the lace together at the top (why at the top?) we form a closed path.

The only other condition Polster imposes is that if you look at the two line segments ending in any eyelet, at least one of them must not be contained in the same column as the eyelet. This is less obvious, but reflects the fact that lacing a shoe is for the purpose of bringing the two sides of it together. Now that we have the number, n, of eyelets in each column, we can think about possible patterns of laces as n increases. These can be classified by the number of horizontals, the number of verticals, and the way one moves around the shoelace loop as one passes from eyelet to eyelet. We are counting, labelling and classifying — this is mathematics already in the very first chapter.

Now, suppose we pull the laces so tightly on our tiny feet that both columns of eyelets overlap. Polster refers to this is as a one column lacing, and we can for the first time begin to ask and answer some mathematical questions. Whatever pattern of lines we had before will collapse to a new one-column version, so we might wonder if it is possible for two different two-column lacing to collapse to the same one-column lacing. Further, we could ask how many one-column lacings there are, and which of them is the shortest.

It is possible not only to formulate such questions, posed as theorems, but also to answer them using straightforward counting arguments. This is an introduction to the area of mathematics known as combinatorics, which is central to the information and telecommunications industries, as well as being a very active area of pure mathematical research. But we have barely begun: beyond theorems of one-column lacings proved only for the fun of it, beyond the useful notes and funny cartoon which close this chapter like all the others, we move on to similar theorems about two-column lacings. Each requires a chapter of its own — simply counting and classifying the ten types of two-column lacings takes 10 pages, and the level of the arguments is raised accordingly.

Although we never move beyond a school level of thinking, that thinking is stretched to the limit as we move through a very satisfying number of beautiful little theorems. We are also introduced to a variety of methods of proof: combinatorial arguments predominate, but there are also some elegant geometric proofs to consider. A satisfying reasoning tool is developed in which a crossing of two line segments is gently "undone" and allowed to ping back to a simpler arrangement, like an elastic band released. This leads to even more diagrams in a well-illustrated book, but they are not there merely for decoration. They enable us to reason with pictures.

Towards the end of the book, the theorems increase in difficulty to the level where some elementary calculus is involved. When we ask which of the many possible lacings is the strongest, we are asking how much of our pull on the two ends of the laces is transferred to a horizontal drawing together of the two sides of our shoe. We need geometry to work out how much tension in a diagonal segment is transferred to the horizontal. We need to consider the stretch of the eyelets, namely the distance from eyelet to eyelet (divided by the distance between the eyelet columns). The plot thickens at this point, and I won't spoil the book by telling you which is the strongest.

I won't do so because the book is a story, and like all good stories should not be spoiled. It is more than simply the story of shoelaces and shoes, which is recounted in a fun appendix. It is more a story of mathematics, a story of how when one person stops to ask, "why do we do things in this way and what is the hidden logic at work," wonderful things can happen. By boiling a situation down to its essentials, by labelling, measuring, counting, and classifying we set the stage for asking questions whose answers will stretch, surprise, and delight us.