'A short history of nearly everything' 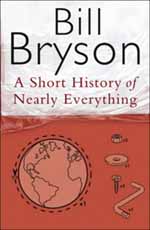 A short history of nearly everything

Bill Bryson - he's a travel writer isn't he? He goes places and writes about them, tells amusing anecdotes about things he sees and people he meets, making his readers laugh at the same time as teaching them something about the places he visits?

Yes, that's about right, and in A short history of nearly everything he does pretty much the same thing. The only difference is that here the places he visits are not just on the other side of the planet, they're also inside the planet, all around the planet and a very, very long way away from the planet. They also range from places he visited last year to the place where it all began something like 13.7 billion years ago. It's a lot of ground to cover.

But cover it Bryson does, and quite comprehensively as well. There are chapters covering biology, geology, cosmology, anthropology, even a few subjects which don't end in 'ology', such as physics and chemistry, and of course, mathematics. In fact, take any scientific field you can think of and he has, if not actually covered it, at least taken a pleasant stroll across it. But Bryson is an enthusiast rather than a polymath and his depth of knowledge is understandably limited. There is unlikely to be anything in the book most scientists did not already know about their own subjects and he freely admits that "inky embarrassments may yet lurk in these pages".

As for the book's mathematical content, again things are quite straightforward. Not surprisingly, Sir Isaac Newton gets several pages all to himself - and also provides one of only two equations which appear, namely F=Gmm'/r2 (the other being that famous one of Einstein's, which also gets a fair mention). But really that's about it. Maybe such notables as Hilbert, Euler or Gauss don't have a place in such a book as this, as it is after all more of a physical sciences sort of thing, but a quick flick through the index at the back shows no mention of Archimedes, Galileo or any of the other mathematical pioneers on whose work so much of the included science relies.

But where the book does succeed is in its scope. For a single writer to cover so many disparate subjects, and do so with such confidence and so engagingly, is a remarkable achievement. A short history may come up well short of the cutting edge of contemporary science, but it certainly helps explain how we got there in the first place.

And one more thing. No other writer I can think of - with the possible exception of Douglas Adams - can make the end of the world seem quite so exciting.