In skimming, spin's the thing

Someone skimming a stone across a lake, making it bounce off the water many times, is always an impressive sight. Perhaps more impressively, when we skim a stone we are intuitively solving the many equations governing the physics of the action. Somehow we know that for a successful skim we need a flat, circular stone, thrown fast at a low angle to the water with a good amount of spin.

Now Lydéric Bocquet, a physicist from the University of Lyon, France, has worked out a mathematical description of what happens when a stone is skimmed across water. His theoretical answers agree with what we intuitively think will produce the most bounces. If you fancy a challenge, you might like to know that to beat Jerdone Coleman-McGhee's world record of 38 bounces, Bocquet calculates that you would need to throw a typical stone faster than 12 ms-1 and spin it more than 14 times per second. 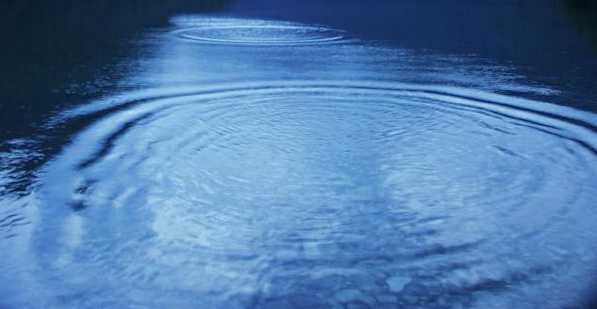 When a stone hits water, the water surface exerts a reaction force against the stone, giving it an upward lift. For the stone to bounce, this lift force, calculated by Bocquet to be

is the density of the water,

is the stone's speed,

is the width of the stone, and

Not surprisingly, the situation gets a little more complicated. When the stone hits the water, some of its kinetic energy is lost during the collision, due to friction as it skids along the surface. If the amount of kinetic energy lost becomes equal to the amount the stone had in the first place, then it will have no speed to move further and will just sink to the bottom. Again, Bocquet's calculations give a minimum speed the stone must travel at in order to bounce, and this time it must be greater than

is a constant involving the angle of stone to the water,

is the acceleration due to gravity and

is the distance the stone skids across the water as it bounces - a distance determined by the mass and size of the stone, the angle of the throw and the density of the water.

By analyzing these two equations, Bocquet determines that you would need to throw a typical stone (100g and about 10cm long) at a speed of at least 2 ms-1 for it to bounce at least once.

So we know we need to throw the stone fast enough, but why do we need to spin it? The reason is that, in order for the stone to bounce, not only must it move sufficiently fast, but it must also hit the water at a precise angle. And in order for the stone to stay at the same angle after it is thrown, it needs some sort of stabilizing force to stop it from toppling over as it goes. By spinning the stone you give it angular momentum, which provides just such a stabilizing force. Bocquet calculates that you need to set the stone spinning at least

times per second, which is a few revolutions per second for a typical stone.

So, no matter how fast you throw a stone, unless you give it enough spin it will destabilize and won't reach the maximum number of bounces that you could expect based on speed alone. This corresponds to our innate intuition - throw it flat, fast, but most of all the spin is the thing.