by Alex Bellos and Edmund Harriss

Alex Bellos' and Edmund Harriss' mathematical colouring book is great. It puts the beauty of maths, famous but elusive, at the tip of anyone's pen. And you're not condemned to admire that beauty from a distance. With lines and numbers there to help, you can actually "create" it, even if you're not a gifted artist or mathematician.

The book is made up of two parts. The first — called colouring — contains complete images for you to colour in. The second — called creating — gives you rules to follow to create your own images. They are very simple rules, which, like the rest of the book, don't require any mathematical background knowledge whatsoever. 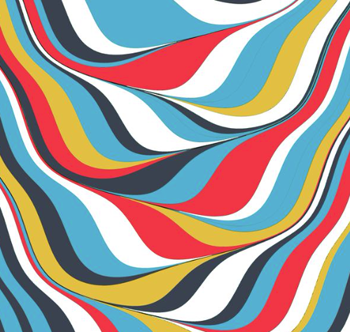 A pattern from the book. What colours would you choose?

Those of us who enjoy colouring-in know there's nothing quite as calming as following a neat template while letting your imagination run a bit wild with the colours. You'll definitely get lots out of the templates in this book — some of the patterns are extremely intricate — and, since they are all abstract, you can do what you want with the colours.

But there is an added pleasure in this case. When you're colouring (or "creating") a pattern, becoming deeply acquainted with it and getting a feel for its smooth curves or sharp angles, you discover some of the features that make it what it is. In a sense, you're doing maths without doing any of the things people usually find painful about it. Being creative within strict constraints is exactly what mathematicians do. And when you've finished a pattern, you often find that those rules, combined with your imagination, add up to something a lot more stunning than the sum of their parts.

It's nice to see the patterns stand for themselves. Their explanations, listed in the back of the book, stand discretely in the background. There aren't even any page numbers to make you feel you ought to look up where a particular pattern comes from, or what it means. If you'd just like to enjoy the images, then that's fine. And if you'd like to know more, the explanations give you just enough information for further research.

The book spent a few days on my kitchen table, visited by a stream of people with varying levels of mathematical interest (including quite a few 0 levels). Whatever their initial reaction to a mathematical colouring book, they all ended up engrossed, and many had to have pens snatched out of their hands. I won't let anyone rob me of the pleasure of colouring it in myself!!