Have you ever been trying to solve a Sudoku puzzle and been gripped by a sinking feeling that maybe you were stuck with a lemon? That maybe the puzzle you are struggling with actually has no solution at all? And, if you do find a solution, how can you be sure it's the only one? What if half an hour ago you had written 5 instead of 3 — would you then have gone down a path to a completely different solution? 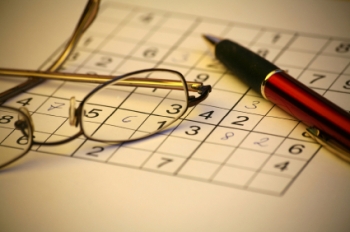 These questions and others are explored in the article Sudoku squares and chromatic polynomials, by Agnes M. Herzberg and M. Ram Murty, which appears in the June/July 2007 issue of the Notices of the American Mathematical Society. The authors use tools from a branch of mathematics called graph theory to systematically analyse Sudoku puzzles, and find that Sudoku leads to some unsolved problems in graph theory.

With this analogy between Sudoku puzzles and graphs in place, Herzberg and Murty were able to use tools from graph theory to prove theorems about Sudokus. For example, they prove that the number of ways of extending a partial colouring of a graph is given by a polynomial, that is an expression of the form

And if you have been worrying that your newspaper will run out of Sudoku puzzles some time soon, you can relax: the authors argue that the number of distinct Sudoku puzzles is somewhere around 5.5 billion — enough to keep Sudoku afficianados busy for a long time to come.