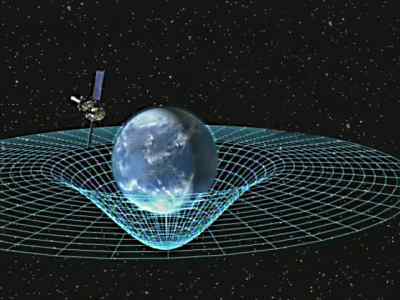 Physicists have completed the penultimate step in their quest to test Einstein's general theory of relativity. After 50 weeks of orbiting Earth, the satellite "Gravity Probe-B" (GP-B) has transmitted the data it collected, and now an analysis will show whether or not Einstein was on the right track.

Although Einstein's theory, postulated around 90 years ago, is fundamental to modern physics, no-one has ever been able to test it experimentally. This is because its effect is all but invisible to tiny beings like us, occupying the minutest fraction of an immense universe. Einstein's major insight was that time and space are inextricably linked. Together, they form four-dimensional "spacetime", which is warped and distorted by massive bodies, an effect we call gravity. It's possible to calculate exactly what form this distortion should take, but observing it directly has, until now at least, defied our capabilities.

NASA's GP-B was launched in April 2004, after more than 40 years of preparatory work involving physicists from NASA and a host of other institutions. The hope is that the data GP-B collected will demonstrate two gravitational effects which are predicted by Einstein's theory.

The first of these is called the geodetic effect, which is a result of the way in which, according to Einstein, a massive body warps spacetime around it. Imagine a somewhat slack trampoline with a heavy sphere, a bowling ball for example, placed in its middle. The sphere will cause the trampoline's surface to warp, and create a dip. Any object that falls into the dip will roll towards the sphere. If you set a marble spinning around the sphere on the wall of the dip, the axis which would be horizontal if the marble was on a flat bit of the trampoline tilts towards the sphere. In a similar way, spacetime should be warped by Earth - gravitation is not actually an attracting force, as Newton thought, but simply the result of a distortion of spacetime.

The second effect, called frame dragging, results from the fact that a spinning body drags its local spacetime with it as it moves - imagine throwing a spinning marble into a pot of custard. It will drag the nearby custard with it, and if another marble lies in it, its axis will tilt. 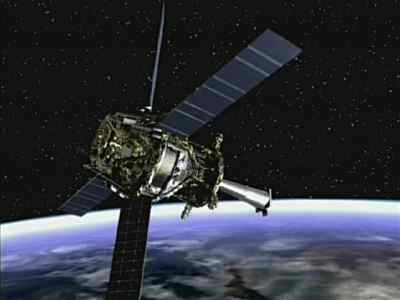 So how can you measure if these two effects do indeed occur? The idea is as simple as it is elegant. It's based on the fact that the axis of a spinning top, or gyroscope, always points in the same direction when it is spinning, unless some external force causes it to tilt ( see Plus article Galloping gyroscopes). So if a perfect gyroscope which experiences no friction is put in orbit around Earth, with its axis pointing in a fixed direction - a distant star - then, according to Einstein, the two effects will eventually betray themselves by tilting the gyroscope's axis.

But what is simple in theory can still be a nightmare in practice, and it took the physicists over 40 years to manufacture a gyroscope perfect enough to show up the effects. The result consists of a sphere the size of a ping-pong ball spinning in a vacuum. To avoid any effect mimicking the two that are to be tested, the sphere has to be perfectly spherical, variations in its density have to be absolutely minimal, and no electrical charge is allowed to build up while it is spinning. Producing it, or them, as there are in fact four gyroscopes aboard the satellite, required the development of new ultra-precise technologies. They allow the fused quartz the spheres are made of to be polished within 40 "atomic layers" of a perfect sphere. The Guinness Database of Records has listed the spheres as the roundest objects on Earth.

At the beginning of GP-B's mission, led by Francis Everitt from Stanford University, these gyroscopes were set spinning with their axis pointing to the star IM Pegasus, about 300 lightyears away from Earth. To keep track of this initial direction, an immensely precise telescope was installed on the satellite, and equally precise equipment was developed to monitor the gyroscopes' orientation.

The mathematics underlying the general theory of relativity allows the scientists to predict the amounts by which the gyroscopes' axes should have shifted if the theory is indeed correct. And these amounts are minute: 6.6 arcseconds (0.0018 degrees) due to the geodetic effect and 0.41 arcseconds (0.000011 degrees) due to frame dragging - quantities too small to imagine, but observable with the specially developed equipment aboard the satellite.

It will take more than a year to analyse the data, and NASA is not expected to announce a result before 2007. Most physicists probably believe that Einstein's theory will redeem itself. But if it doesn't then the physics community will be in a true spin, and the theories underlying modern physics may have to be rewritten.

Thanks for the writeup. But i tend to see that, space being constant, its the object that is inextricably linked with time.

My writeup is here