Sometimes the best way to express a scientific idea is through an image that grabs the eye and invites viewers to wonder what they're seeing.

Artist Luc Benard and mathematician Richard Palais have done exactly this with their winning illustration "Still Life: Five Glass Surfaces on a Tabletop" in the 2006 Science and Engineering Visualisation Challenge. Theirs was one of fourteen winning images and multimedia presentations, each using innovative approaches to encapsulate a scientific story. All the entries were featured in the journal Science, which jointly sponsored the competition with the National Science Foundation. 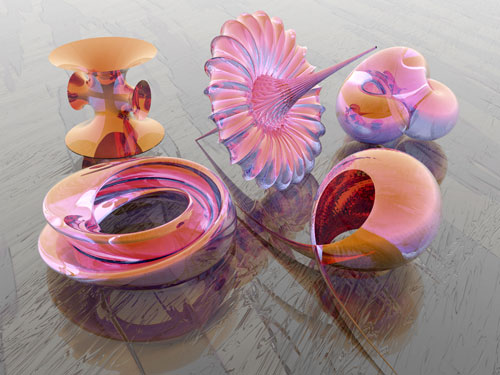 The five mathematical surfaces depicted are (starting from lower-left and moving clockwise): the Klein Bottle, the Symmetric 4-noid, the Breather Surface, the Boy's Surface and the Sievert-Enneper Surface. The choice of surfaces in the image was up to Benard, who created the image using the software 3D-XplorMath created by Palais. "Luc chose well not only from an aesthetic viewpoint, but also from a mathematical viewpoint too, covering as they do a very wide range of geometries with historically interesting examples," says Palais.

The Klein bottle, in the lower left of the "Still Life", is a two-dimensional surface that can be constructed from a Möbius band by gluing its edges as shown in this Quicktime movie. The surface is what mathematicians call closed and non-orientable. "Closed" means that it has no boundary: an ant walking around on it will never fall over an edge. "Non-orientable" means that the surface has no inherent orientation; that there is no distinction between an inside and an outside: even though locally there seems to be another side to the surface, an ant crawling around on it can get to the point on this other side without having to pierce through the surface.

Usually, the Klein bottle is represented by a different shape much more akin to an actual bottle, as shown in the image below. The representation chosen for the Still Life, though it looks different, is topologically equivalent to the standard representation. According to Palais, this figure-8 Klein bottle is "a lot more symmetric and elegant and mathematically interesting". (You can read more about both the standard and Figure-8 Klein Bottle in the Plus article Imaging maths — Inside the Klein Bottle.)

The Boy's Surface (top right in the image) can be constructed by cutting and re-assembling a sphere. Like the Klein bottle, it is non-orientable, and, says Palais, "there is a great deal of mathematical history involving both of them".

A standard Klein Bottle is topologically
equivalent to a Figure-8 Klein Bottle.
They are both non-orientable surfaces
with no inside and no outside.
(Image by Konrad Polthier)

"The Symmetric 4-Noid [top left in the image] is an example of a minimal surface, which means in effect that it can be constructed as a soap film by dipping a properly shaped wire frame into sudsy water and withdrawing it," says Palais. "Minimal surfaces are mathematically interesting for many reasons, [and] in addition the 4-noids have other rather special properties."

The other two objects in the Still Life represent different two-dimensional geometries. For over 2000 years mathematicians had assumed that a surface whose geometry satisfies four special rules, set out by the Greek mathematician Euclid of Alexandria, also satisfies a fifth rule called the parallel postulate. This postulate can be stated in various ways; one of them says that given a straight line l and a point p not on the line, there is exactly one line through p that never meets l, in other words that is parallel to l.

The parallel postulate obviously holds for straight lines on the flat plane. But in the 19th century mathematicians came up with examples of surfaces that, while satisfying Euclid's other four axioms, failed to satisfy the parallel postulate. (See Plus article Strange Geometries). Some of the non-Euclidean surfaces have the property that all straight lines meet, so that there are no parallel lines at all (a straight line in this context means a curve on the surface that gives the shortest distance between two points). These surfaces are said to have elliptic geometry. A surprisingly simple example of this, given the amount of time it took to be discovered, is the surface of a sphere. Here the role of straight lines is played by those circles that have maximum circumference. Any two of these great circles meet at some point of the sphere and so the parallel postulate cannot hold. There are many other examples of surfaces with spherical geometry and a particularly elegant one is the Sievert-Enneper surface that was chosen for the Still Life (lower right in the image).

The other geometry that fails to satisfy the parallel postulate is called hyperbolic geometry. Here there are infinitely many lines through a given point that never meet a given line, so again the parallel postulate fails. Surfaces with hyperbolic geometry don't occur as readily in the world around us as those with flat or elliptic geometry, but the Breather surface (centre top in the image) is a particularly beautiful example of such a surface.

"The reason I use math objects in my work is purely aesthetic, I find them so beautiful and strangely, they often are so organic," says Bernard. He chose the particular surfaces for the Still Life because "visually they are really different from each other and as a group they go well with each other in the visual composition". But he also chose them because they were not well-known outside the mathematical community, and the image has caused many people to ask just what these objects are.

Both Palais and Benard feel strongly that these sort of visualisations have an important role to play both within the mathematical community, and in helping that community reach the general public.

"With all the images and information we are exposed to, we need now more than ever, spectacular images if we want to reach people," says Palais. "I think we are in a time of visual communication. If we want to reach people, we will need, more and more, to use specialists in creating these visualisations, for our scientific communication in Maths, as well as in other scientific branches."