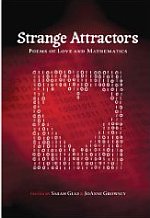 The collection features some of the most famous love poems, such as Elizabeth Barrett Browning's measuring of love in her sonnet: "How do I love thee, let me count the ways...". One of the most interesting poems using counting is "Who Counts, Counts" by Stephanie Strickland, where the shifting status of relationships, and the bond of motherhood, is conveyed very simply by counting and recounting the people in a relationship.

The final section, where poets (many mathematicians) write about their love of maths, also has many examples of strong expression, and strangely enough, many of these poems seem almost less mathematical than those in the previous sections. It is nice to see the passion for the subject that so many mathematicians share expressed in this unusual and open-hearted way. I think one of the strengths of such a book is that not only can it show people who are looking for poems to express love, the beauty of the language of maths, but it also might help explain some of the deep emotions mathematicians feel for their subject. I also like the duality of combining maths and poetry: that as well as taking maths to poetry lovers, it will also expose mathematicians to poetry, and perhaps as the best artistic-scientific collaborations do, allow insight on both sides.