Christine is from Athens in Greece and entered Keele as an Access student without A-level Maths. She did the foundation year at Keele which included Transfer Maths. She is reading Maths and Physics. While at school in Greece, she did English for "a couple of hours every day, five days per week". She has always "been good with numbers" but at the end of her school life wasn't sure what she really wanted to do. Eventually she decided she would like to study in Great Britain. She did an Access course for 1 year in Kent before coming to Keele.

Steve is from Langley Mill in Derby. He is reading Maths and Computer Science with Subsidiary English. Steve left school at 16 with 7 O-Levels. He worked for 8 years before coming back into Higher Education, after doing an A-Level in Maths. He worked in a bank and did banking examinations at Nottingham Trent University. Steve found that balancing work and study at the same time was quite difficult. "One of the reasons I came to University was so that I could concentrate rather than compromise". Another influence in deciding to do a degree was a new emphasis in banking of selling services to customers which did not appeal to him. 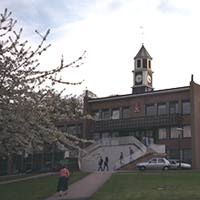 The Clock Tower at Keele University.

They both agree the courses they are doing are demanding but enjoyable. The first year they covered maths methods, algebra, probability and operational research. This year they're doing numerical analysis, dynamics, complex variables and vector calculus. As well as attending lectures, they work in the library, read textbooks and use some computer packages, for example to plot graphs and find numerical solutions. There are also tutorials which have 10 to 20 students in attendance.

Christine has enjoyed dynamics "because it involves physics at the same time as the maths". For Steve the enjoyment is in the challenge of dealing with a new concept "after having a period of struggling with it and hating it you suddenly enjoy it because you can do it".

Friday and Wednesday nights are "the big nights out at Keele. We also have a rag week where certain funny things happen" and there are various special interest clubs. The trick they say is to enjoy some but not all of these events "if you want to do well in your studies". They get to meet a lot of people from around the country and from other countries. Christine likes swimming and Steve is a member of various societies and played a lot of football in his first year. They both like to ski. 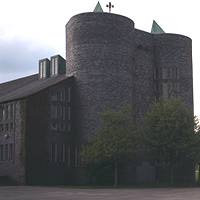 The Chapel at Keele University.

Managing on a budget is another challenge. It can be done but it is not always easy. "You can eat a healthy, balanced diet on cheaper foods and still have 2-4 drinks a week". Also they think you have to limit the amount of new clothes and CDs you buy.

Steve came to university with the idea of becoming a teacher, but is now also thinking about career possibilities in the IT sector. He also wants to do some computer work over the summer. He is applying to STEP(Shell Technology Enterprise Programme) which has been set up to give students work experience as a step from academic work to employment and also give them some work experience.

Christine is concentrating on getting her degree. Then she supposes she will get a job with a company "in industry doing science work preferably". She is also planning to get some work experience in the summer and has applied to the Nuffield Foundation to join a maths or physics project. Like Steve she is also applying to STEP.

Useful tips for other students

Christine: "Look at lots of different books to find the ones which suit you best. Always ask the lecturers questions if you don't understand something, because I've found that's the best way to learn and practice a lot of exercises. Also it is possible to do a degree here without first getting A-Level Maths. I'm doing that after a year on an Access course and can cope with the course content."

Steve: "I found it hard doing A-Level Maths in one year, two years is what you need. It can be a good idea to have a study break, but after A-Levels, certainly not after O-Levels as I did."