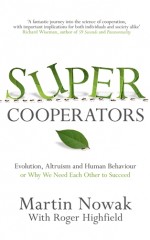 SuperCooperators: Evolution, altruism and human behaviour or Why we need each other to succeed

By Martin Nowak with Roger Highfield

Sometimes it doesn't feel like the world is a very nice place. The news is filled with war, political conflict, crime – it seems we just can't get along. So it is very cheering indeed to read a book dedicated entirely to convincing you that we are actually very helpful to one another and that the whole world as we know it is only possible thanks to cooperation. And surprisingly the authors, Martin Nowak and Roger Highfield (editor of New Scientist at the time), don't use psychology or sociology to make their argument – they use maths.

Perhaps sensing our initial disbelief that the world really is such a nice place, the authors fill the first five chapters (each outlining a different scenario in which cooperation triumphs) with a flurry of examples of cooperative behaviour from across the animal and human worlds. This first half of the book presents a fascinating mix of Darwin's theories, economics, animal instinct and human emotion and motivation. Initially I couldn't imagine how maths could describe a seemingly subjective behaviour such as cooperation. But the authors give a clear and convincing account of how a combination of evolutionary maths and game theory describes the behaviour of any interacting population and explains why cooperation is, repeatedly, the winning strategy.

As well as using real world examples to illustrate the mathematics throughout the book, the authors also use some particularly colourful analogies. I particularly liked this description of the shift from cooperative to defective strategies in one of the early chapters: "…spiralling ever downward into vendettas that overshadow those seen in Romeo and Juliet, between the Hatfields and McCoys, or anything witnessed in Corsica, for that matter."

The second half of the book then focuses on a number of particularly impressive feats of cooperation and how humans are supercooperators, the beacons of cooperation. One of the most fascinating of these chapters was how cooperation is necessary for the development of language. It is intriguing to consider exactly how and why language might develop, and the mathematical description of the process has a simple elegance that really captures your imagination. It made me seek out more information on this topic, using the useful section of references and further reading at the end of the book.

As well as describing this new field of research, this book also documents Nowak's personal journey exploring cooperation using mathematics. We meet many of the people the field, Nowak painting an affectionate picture of his colleagues and peers. These personal stories give a sense of the human side of maths, conveying the personality, inspirations and motivations of those in the field. One particularly entertaining anecdote has Nowak walking into Nobel laureate Frank Wilczek's office to find him apparently napping: "I wasn't napping," he said. "I was just thinking about whether the Universe could in fact be five-dimensional and just appear four-dimensional." I'm going to remember that next time I'm caught snoozing!

The book also does an excellent job of evoking the feeling of doing mathematical research. The feeling of getting caught up in an idea and the focus of creating new work – "I fell in love with this work… I was almost consumed" – and the pride and excitement in finding a new result – "I was happy. I was amazed. I wanted to tell someone. But there was no one around." This, combined with the detailed picture of of people interacting in the field, highlights the collaborative, creative and cross-disciplinary nature of maths research.

There is a lovely narrative feel within each of the chapters, however, there is sometimes a scholarly feel to the overall structure of the book, with references to what will be discussed later and what was discussed before. But perhaps this isn't surprising given the ambitious aim to give a comprehensive account of the history, achievements and future goals of an entire area of research.

Unusually, even for popular science books, the authors have not shied away from the maths. For someone with a mathematical background it was thrilling to follow the mathematical arguments presented in some detail, rare even in popular mathematics books. But then, often suddenly, the maths would be cut short leaving the mathematically inclined a bit unsatisfied with unanswered questions. It would be interesting to read a review of someone from a different background, to see if they also enjoyed the mathematical details or if they thought there was too much. But it is very encouraging to find authors willing to walk the difficult line between providing too much and too little mathematical detail.

SuperCooperators is a thought provoking book allowing you to explore a surprising area of mathematics, the maths of altruism. And as well as the fascinating subject matter, one of the things that has most stayed with me is Nowak's enthusiasm for his research. His passion for maths and its role in science is particularly inspiring: "Mathematics allows me to chisel down into messy, complicated issues and – with judgement and a little luck – reveal simplicity and grandeur beneath. At the heart of a successful mathematical model is a law of nature, an expression of truth that is capable of generating awe in the same way as Michelangelo's extraordinary sculptures, whose power to amaze comes from the truth they capture about physical beauty."

Perhaps the world, thanks to cooperation and to maths, really is quite a nice place after all.

You can read an interview with one of the authors, Martin Nowak, in the article Does it pay to be nice? – the maths of altruism.

Book details:
SuperCooperators: Evolution, altruism and human behaviour or Why we need each other to succeed
Martin Nowak and Roger Highfield
hardback — 330 pages
Canongate Books (2011)
ISBN: 978-1847673367

Rachel Thomas is the editor of Plus.