'The symmetries of things' 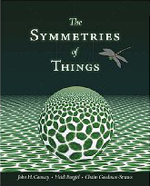 The symmetries of things

Symmetry abounds: the wallpaper, your chair, even your own body. Familiar types of symmetry include reflection in a line and rotation about a point. Creating a repeating pattern by translating a core segment to a new place, common in wallpaper, also counts as a symmetry, as does switching without the use of a mirror from an anticlockwise segment to one otherwise identical but oriented clockwise. This book describes types of symmetry, and gives a definitive list of all possible symmetries in various geometries. These twin problems of classification and enumeration are common in mathematics, and the story the book tells is almost a blueprint for such work.

In contrast to most books, this one is given in reverse order. The results come first, then the notation and concepts are made firm before the results are shown to depend on a long chain of others, which finally ends with one link which must be proved. This reverse order gives a context and motivation for learning each idea. You are left deliciously suspended at the end of each chapter, confident that you have an idea of what is going on, confident that what has come before is true enough, but not yet knowing why. You become eager to turn the page and tackle the next chapter. It's like being air-lifted to the top of a mathematical building: the view is amazing; now you want to explore the interior and work out where the stairs are. Moreover, this backward approach encourages you to feel and act as if you are a co-discoverer of these facts. You accompany the authors as they learn about the structures they so beautifully illustrate on over 400 hundred glossy and full-colour pages. Tacitly, you are given an education in the ways of thought and skills of way-finding in mathematics.

The book was written in spurts over several years, whenever the authors could all get together. The material and the authors' understanding of it co-evolved with the book, so that some chapters contain material unthought of at the book's inception. Perhaps those gorgeous illustrations took the longest to make, and they are certainly worth it. Almost every page contains a vivid and creative pattern which makes the book worthwhile even for those allergic to maths. Indeed, the authors suggest that while everyone can enjoy the book visually, the three parts of the book are aimed at people with different levels of mathematical understanding.

Part I is open to anyone with an interest in maths, but perhaps without much knowledge of it (beyond, say, high school geometry or some kind of geometrical intuition). But even part I is not easy. Many ideas are introduced, and they often touch upon profound areas of pure mathematics, including topology, group theory, and (a vital concept in the book) orbifolds or orbit-manifolds, a type of surface upon which points of the symmetric pattern which in some (rigorous) sense are identical have been folded on top of one another. Nothing is left without proof: the big result, or "Magic Theorem" of this part is shown to ultimately rest on Euler's characteristic and the classification of different surfaces. Here, the creativity and imagination of Conway come to the fore, as we see wholly new approaches to these questions.

While part I functions as a whole and is rooted in patterns of the everyday world (it even contains guidelines for the construction of actual objects), part II diversifies, ups the pace, and becomes more abstract. The authors point out that for this part they expect readers "to know some group theory", and they aren't joking. Even those with more than the "first course" in group theory the authors recommend may sometimes struggle to maintain concentration. However, the illustrations continue to titillate the eye.

Relief and satisfaction are the rewards for completing part II. And then you turn to Part III, a complete understanding of which is expected from "only [...] a few professional mathematicians." You try not to be patronised when the authors continue "much of it can be read with profit by some readers, and many more will enjoy inspecting our pretty pictures." However, you notice that, strangely, Part III starts with amongst the most accessible material in the book, with mostly pictorial arguments (and why not?) and intuitions familiar from map projections. Later work is also quite straightforward, for example the pictorial representations and comfortable discussions of platycosms, three-dimensional flat universes. In general, however, things are both extremely varied and very hard. The authors' method still involves changing one problem to another, to another, until the end of the chain is finally proved. In contrast to parts I and II, this usually occurs within the same chapter, the pace being faster and the results being more varied. There is even a brief interlude on the work of Conway with others on a "simpler" proof of the famous result which states that one cannot hear the shape of a drum. There is a link between this result and symmetries of tilings in the hyperbolic plane. Amazing!

Quizzes throughout test the reader's understanding, and often come with solutions. Chapters almost always finish with "Where are we?" sections which review the journey, the new results of the current chapter, and point to where the story will go next. The style of writing is relaxed and playful: Euler's theorem is proved by placing oneself in the position of a commander of a fleet of Barbarian sailors first flooding fields and then sacking towns — but leaving Rome intact (if perhaps a little hungry and isolated). The explanations are both short and sparse. Concepts are not bashed into your skull by exposing all of the intricacies at first, but by getting you started and having the flow of the narrative encourage you to keep going with the text even if confused. Later work and examples, maybe just over the page, usually clear up any lingering confusion. Or it may be that you think you understand something until an "exception" occurs, at which point you yourself must do the work of physically returning to the definitions and correcting your own mistaken assumptions. Thus we see the fusing of the best aspects of textbooks — conciseness, flow, reader-independence — with the best bit of popular writing — accessibility, fun, beauty — plus the presentation of results before their proof.

Henri Poincaré wrote, "It is hard to believe what a huge amount of thinking a properly chosen word can save," and this book is a testament to the power of good notation. It is not only good, but often funny (and hence memorable). A "mirrorless crossing" becomes a "miracle", a "wonderful wandering" is denoted by a wonder-ring (a circle), and later we learn of the "Galloping Gnu Conjecture" and how to "hut moas". The power of analogy and reduction to other types of problems is a common theme. The introduction of a "cost" function in terms of coinage denominations, for example, turns the classification and enumeration of Euclidean symmetries into a question about breaking change. This idea also shows the benefit of asking apparently silly questions to expose hidden assumptions. You can't break a pound into halfpennies because they aren't legal tender anymore — but what if they were? In part III, the authors ask similar questions and expose a hidden assumption about the geometry, or space, in which the symmetries exist. This refusal to accept things at face value is typical of good mathematical work, and here, as often, leads to a huge development of the work in question.

Some of the work presented here has only previously appeared in the scientific literature (and so has been read by almost no-one). Some work is completely new, or at least appears for the first time. The sheer amount of maths and ideas is overwhelming. The book presents a whole new way of looking at patterns. The methods have been worked out so exhaustively, and the trails opened up in the book have been followed so extensively, that you almost can't believe that such a huge body of knowledge could have lain dormant for so long! Yet the book ends excitingly with a final "Where are we?" section, worth quoting in full. "We may seem to have come a long way, but in fact we have barely scratched the surface of the mathematics of symmetry. A universe awaits — Go forth!"