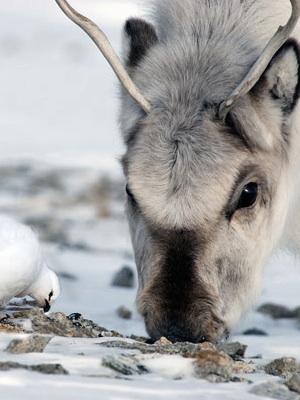 Here in the UK we might view our recent snowfall and cold snap as an extreme weather event but for a small community of animals wintering on the  high  arctic island  of  Spitsbergen, Svalbard, it is rain in winter, rather than snow, that is an extreme event. And winter rain has a much more severe impact on them than just delaying transport or closing schools. Norwegian scientists have shown that it causes the birth and death rates of the different species on Spitsbergen to fall into step, putting the whole community at a higher risk of extinction.

Biologists have previously been able to show that the fluctuations of populations within the same species will synchronise as a result of extreme climate events. However Brage Bremset Hansen, from the Centre for Conservation Biology at the Norwegian University of Science and Technology, and his colleagues have shown this occurring for a whole community of species for the first time (you can read more in their paper in Science).

Hansen and his colleagues examined the small community of animals that remain on Spitsbergen each winter. The wild Svalbard reindeer, birds known as rock ptarmigans and small rodents called sibling voles survive the winter by eating the vegetation that lies under the snow. But if rain, rather than snow, falls in the winter, this precious vegetation is encased in ice. With less food available the populations plummet as young and old animals die and the survivors give birth at much lower rates the following year.

are negative numbers) such that

depends on the maximum population size,

depends on the the initial population size and

depends on the rate of growth of the population.

The derivative of this function is

so the growth rate of the population (where

) is a linear function of the natural logarithm of the size of the population.

Arctic foxes also live on the island, surviving by eating the other animals, primarily feasting on the remains of dead reindeer. In an extreme winter with many days of rain the fox population does not initially suffer; in fact there are more dead animals around to feed off than normal. However the following year the fox population does decrease as there are fewer other animals around and those that remain are more robust. In fact, a period of winter rain and the icing that follows causes the population rates of all the animals on the island to synchronise, with the fox population lagging one year behind.

The researchers modelled the animal populations using linear regression: fitting a straight line to the observed data that described the population growth rate as a linear function of a number of factors, including the logarithm of population size (see box on the right for more information). By testing a number of different models they were able to say that weather, in particular the number of rainy days in winter, was the best predictor of the annual population growth rates across the species. And the correlations between the population changes of different species were strongest during periods of extreme weather: rainy winters generate simultaneous population crashes in all overwintering herbivores, driving them into two years or more of synchronous fluctuations, with the fox population lagging behind by one year. After this period the population dynamics for different species may diverge until they are forced back into synchronous decline with the next icing event.

"We have known for a long time that climate can synchronise populations of the same species, but these findings suggest that climate and particularly extreme weather events may also synchronise entire communities of species," says Hansen. "Svalbard's relatively simple ecosystem, which lacks specialist predators, combined with large weather fluctuations from year to year and strong climate signals in the population dynamics of herbivores, are the likely explanations for how such clear climate effects can be observed at the ecosystem  level." 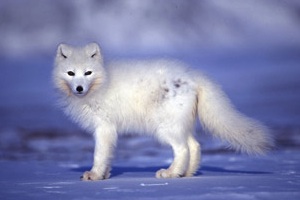 When the birth and death rates synchronise for a population of animals, the population becomes far more susceptible to extinction. If, as this research suggests, extreme weather events can cause this synchronisation to happen for whole communities of species, then changes  in  winter  climate  and  extreme  events  may  have  important  implications  for the stability of ecosystems in the future. "Svalbard is characterised by large weather fluctuations and has been considered an 'early warning' system for the projected increase in extreme events and rainfall during winter across the Arctic," says the researchers. "The present study therefore represents a bellwether of how future changes in climate and extreme events during winter may contribute to shape ecosystem functioning and stability in the terrestrial Arctic."

Really enjoyed this article - especially learning about the Gompertz function.