Quantum mechanics and general relativity are incompatible — and this has led to a decades-long search for a theory of quantum gravity that could combine the two. But the particle physicist Richard Woodard thinks that the mismatch between the two could be nothing more than an illusion, created by the complicated maths techniques used in attempts to unite them. 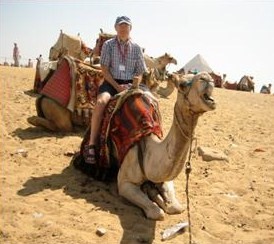 Woodard clearly remembers the time he fell in love with particle physics. It was fall, 1977. A self-confessed "hot-shot" who had tackled graduate-level quantum mechanics with ease as an undergraduate at Case Western Reserve University, Ohio, Woodard arrived at Harvard University for graduate studies with thoughts that quantum mechanics was going to get tougher and more complex. And he was ready for it.

But then he took his first course in quantum field theory, being taught by Nobel laureate Steven Weinberg. "It was one of the seminal experiences of my life," says Woodard. "The idea that you could write down the DNA of the Universe in just a few statements — a brush stroke on a piece of paper — was just awesome. I recall lying in my bed in my dormitory room, just staring up at the ceiling to look at something blank, because I was overwhelmed by the power of the ideas that were being put into my mind by those lectures."

There's a saying at Harvard that you don't really understand quantum field theory until you have taken it three times. So, Woodard found himself studying it once more, under Sidney Coleman. Woodard was learning from men who had been instrumental in creating the standard model of particle physics, which seemed to be perfect, explaining everything that was observed in the lab.

"That left one big unsolved problem, and that was gravity," says Woodard, now at the University of Florida, Gainsville. Every young theorist wanted to tackle quantum gravity — meshing quantum mechanics with general relativity — but the professors at Harvard heavily discouraged their students from going down that perilous route. But Woodard was sold on it. "We theorists are like mountain climbers. We see a tall mountain, and we just got to climb it."

So Coleman, his PhD advisor, agreed to let Woodard climb that quantum-gravity mountain with Stanley Deser, who was at nearby Brandeis University. Since then, Woodard has devoted his professional life to quantum gravity.

While quantum field theory does a fantastic job of describing electromagnetism, and the strong and weak nuclear forces, it doesn't work for Einstein's theory of gravity. No matter how hard you work at applying quantum field theory to gravity, you get the same, dramatically wrong, answer: infinity.

"If you take the theory seriously, it says that when I wave my arm, every being in the solar system gets fried by hard gravitational radiation. That's obviously not true," says Woodard. "So, right now we just have nonsense."

Something is clearly going wrong — but where? Almost everyone agrees that quantum mechanics is not the culprit. Most particle theorists think that the problem lies with general relativity. But Woodard thinks they are in danger of throwing the baby out with the bathwater. He argues that just because the calculations don't work, that doesn't mean general relativity is wrong, or incompatible with quantum mechanics. And it doesn't mean that we need to introduce string theory, loop quantum gravity, or any other exotic new physical theory. Instead, the blame could lie with the approximate techniques used to carry out quantum field theory calculations.

In an ideal world, physicists wouldn't have to make approximations. But we don't live in an ideal world. Anyone who has taken high-school physics will remember having to simplify complicated problems in order to have any chance of applying textbook equations — pretending that cars are perfect cuboids sliding along frictionless roads, say.

Similarly, physicists are often forced to make approximations as they try to solve equations that describe things that can be measured, such as the total energy of a quantum system. Except for the simplest systems, these equations are impossible to solve exactly. That's when physicists start approximating — using a technique known as perturbation theory — and the trouble begins.

The trick with perturbation theory is to start with one of the few ideal quantum systems that you can solve completely and then perturb them, so they look approximately like the situation that you actually want to study. For gravity, this is where things get nasty. Specifically, you end up with an answer in the form of a power series expansion or a never-ending string of numbers, each multiplied by higher powers of Newton’s constant for the strength of gravity,

, times even powers of the energy or mass,

, of the thing being computed (

are pure numbers). Because

times any energy or mass that can be accessed in particle physics is such a small number, just a few terms of the expansion would be wonderfully accurate — if only the pure numbers

and so on were finite. But they aren’t, leading to an infinite answer. 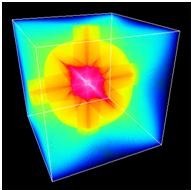 Physicists make their best guess when simulating quantum systems on computers. But is the guess good enough for gravity?

This infinity issue isn't confined to gravity. But for the other forces, physicists have clever ways to sweep these infinities under the carpet and recover meaningful answers. "We get a finite result that is in beautiful agreement with nature," says Woodard.

Unfortunately, these don't work for gravity, so the calculations blow up in your face. "It is quite likely that perturbation theory is giving us misleading results," says Woodard.

? He thinks so. "What I am speculating is that general relativity is the right theory of quantum gravity and that there is a very good series expansion for it," says Woodard. "It just isn’t conventional perturbation theory."

The first step for Woodard is to try and calculate the masses of fundamental particles, like electrons, using his alternative series expansion. In the 1960s, Richard Arnowitt, Stanley Deser and Charles Misner showed how to calculate the mass of a particle using classical general relativity. "I'm trying to extend that to quantum physics," says Woodard, who will be using his FQXi grant of over $37,000 towards this work.

Woodard is also helped by clues that any corrections to general relativity must either be tiny or else disguised as something that we don't recognise as a quantum correction. That's because we do not recognise any large quantum gravitational effects around us.

One way to see such effects would be to examine the propagation of light. Imagine bouncing a beam of light off the surface of Alpha Centauri, the nearest star. We can calculate just how long the beam should take to come back to Earth. Assuming we had detectors good enough to measure the reflection, we could test our calculations. And all would be well if spacetime is classical. But in quantum gravity, spacetime is subject to fluctuations. "That signal would traverse the quantum geometry, which is itself fluctuating. Sometimes the fluctuation would be such as to cause that signal to go a little bit faster than in our average geometry," says Woodard. In that case, the reflected beam would arrive earlier than expected.

Of course, we're a long way from testing anything like that right now. But whatever quantum gravitational effects there are, they are virtually undetectable in our current experiments, and that will influence the development of any alternative to conventional perturbation theory, says Woodard.

Another physicist who works on quantum gravity, Roberto Casadio of the University of Bologna, Italy, calls Woodard "a brilliant and extremely dedicated scientist." He admires the fact that Woodard doesn't take the failure to apply quantum field theory to gravity using perturbation theory as a sign that we need any new theories of physics, "a common lore which has led to a (totally uncontrollable) amount of visionary ideas about quantum gravity."

Read more about...
frontiers of physics
infinity
Tweets by plusmathsorg