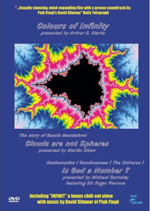 'Colours of infinity', 'Clouds are not spheres' and 'Is god a number?'

This recently released DVD contains three films on fractal geometry, all directed and produced for a general audience by Nigel Lesmoir-Gordon.

Colours of infinity, narrated by Arthur C. Clarke — he of Space Odyssey 2001 — with contributions from a host of revered mathematicians, explores the wonderful world of fractal geometry with a special focus on one of its protagonists: the Mandelbrot set.

Fractal geometry, to me, is one of the most exciting areas of maths. Its images are stunning in their beauty and complexity, yet they are made from simple rules. They display a universality and resemblance to nature that will shake even the most fervent of maths unbelievers.

Computer graphics are the best medium for exploring the fractal world, and this film does make the best of what this beautiful world has to offer. A good proportion of the film is given to visuals, taking us on dizzying and colour-swirling journeys into the Mandelbrot set and its cousins. It's worth watching just for these, so it's almost paradoxical that, initially, the images seemed dated. The film was produced over ten years ago and for TV, and we're now used to seeing more vibrant and precise images flicker across our computer screens. Yet, I soon got used to them — the visuals do capture the beauty and complexity of the fractals, a tribute not only to the mathematical quality of the visuals, but more importantly to the fractals themselves.

The visuals are enough to recommend this movie, but there is more. Clarke, together with mathematician and writer Ian Stewart, mathematician and "father" of the Mandelbrot set Benoît Mandelbrot, and fractal applications pioneer Michael Barnsley, take us on a clear and intuitive journey into the mathematical world behind the imagery, touching on an impressive range of aspects. We learn what a fractal is, how it can arise from extremely simple rules, and the consequences this has for our understanding of the world. If complexity can arise from simplicity, then this may give a clue to the blueprint of a deterministic world that has room for free will, unpredictability and even god. The philosophical line of thought is followed through with a contribution by physicist Stephen Hawking on his understanding of the nature of the Universe. He believes that, unlike a fractal, you can't zoom in on it to an infinite extent: there is a smallest length, and we can go that far and no further.

But it's not all theoretical stuff. Clarke aptly quotes Faraday who, when asked what his newly discovered electricity was good for, replied "what's the use of a new-born baby?". Yet, the "what's the use" question is unavoidable and interesting in its own right, and it is duly explored in the film. We learn about Michael Barnsley's fractal techniques for image compression, used in many areas including satellite imagery. We also touch on the use that fractal geometry might have in understanding the complex workings of our brains. Most importantly, the protagonists stress that new inventions have a habit of being unforeseeable. Many amazing things are likely to come out of fractal geometry in the future.

It's the narrators' clarity and enthusiasm that makes the film a joy to watch. It focuses on the ideas, rather than the actual maths. Some formulae do make a brief appearance, but the mathematical exposition is too vague to be of much use to either novices, or people more accomplished at maths, but strangers to the field. More pedantic experts will note that the mathematical bit blurs the distinction between the Mandelbrot set and its cousins, the Julia sets.

But still, it's the ideas that count, and both experts and laypeople will get something out of this film. The protagonists' belief that, with fractal geometry, mathematicians may well have stumbled on one of the key secrets of nature, comes across beautifully. We even take a journey into psychology as Clarke links the apparent universality of fractals to Jung's symbolism and notion of a collective unconscious. A great range of ideas coming out of a mathematical object!

Is god a number?

The questions explored in Is god a number? are no less lofty. This time it is Michael Barnsley who takes us on the journey. At the start an anonymous female narrator tells us, rather worryingly, that we are looking for a "master mathematician" who is responsible for the wonders of the Universe. Mathematician Sir Roger Penrose, one of the main contributors alongside theoretical physicist John Polkinghorne, puts it more subtly when he speaks of the mysterious triangle formed by the physical world, the human mind and the world of mathematics.

It's a mysterious triangle indeed. We are physical beings, yet our mind, our consciousness, seems to be more than the sum of its physical parts. Our mind gives us access to the ideal world of mathematics, which describes the physical world so amazingly well, but maths can hardly be described as a mere by-product of human thought. So how do these three relate?

The extent to which we routinely engage in mathematical abstraction comes across beautifully in an example involving classical geometry. Everyone is happy with the idea that we can pinpoint a location on a map or measure the length of a piece of wood. Yet these entirely practical activities are based on an abstract and mathematical model of space as a collection of individual points somehow merging into a continuum. Euclidean geometry, a natural and accurate description of the world is in fact quite an impressive feat of abstraction.

The film puts a lot, possibly too much, effort into explaining how simple Euclidean transformations can give rise to complexity and chaos. This is where the fractal geometry comes in. The question arising from this is whether the world, or at least our perception of it, is built from such simple laws, too? Is it possible to construct a purely mathematical model of the world? Could computers, these purely mathematical machines, one day become conscious?

These questions are explored from an impressive range of different angles. We learn about Euclid's axioms and Plato's forms, and Einstein's realisation that space isn't quite like the ancient Greeks had assumed. Barnsley's image compression techniques get an extended look-in, too, as does Gödel's famous incompleteness theorem. It states, loosely speaking, that within maths there are questions that can only be answered if one leaves the boundaries of a strictly axiomised system. Mathematics by itself, then, may never suffice to describe the world.

The questions raised in the film are absolutely fascinating and the breadth of issues touched on, mathematical and otherwise, is truly impressive. I have mentioned only a few here. In fact, the film is probably too ambitious. The density of ideas is so great, that the film soon loses a clear narrative line, and you end up with a heap of not-quite-connected ideas. This, to me, was exasperated by the fact that mathematical terminology seems to be avoided at all costs: fewer elephants and spiders and a little more crispness of expression might have clarified things. By the same token, I found the packaging of the film annoying at times. The anonymous and invisible narrator is irritatingly over-enthusiastic, and Barnsley does sometimes come across as slightly demented, forcing the suspicion that he'd been typecast as your usual deranged professor. Together these things blend into a sometimes tabloidy feel, almost as if to counteract the depth of the ideas.

But these are clearly editorial decisions hinging on the fact that the film is trying to capture, and entertain, a popular audience. It might not convince everyone, but if you're interested in ideas, in the widest sense of the word, then you will enjoy this film and have plenty to muse over afterwards.

Clouds are not spheres

The third film on this DVD explores the life and work of Benoît Mandelbrot, discoverer of the set carrying his name and one of the pioneers of fractal geometry.

Mandelbrot's story, told by himself and presenter Martin Shaw, and augmented by accounts of mathematicians he worked with, beautifully highlights an interesting feature of mathematics: that ideas which initially seem like purely artificial products of mathematics can find applications, sometimes decades or centuries later. All it takes is someone, in this case Mandelbrot, who makes the connections and spots the underlying patterns. This in turn often spawns whole new areas of pure maths.

In Mandelbrot's case the new area of maths is fractal geometry. Fractals had already been discovered at the beginning of the twentieth century, but they were regarded as mathematical oddities, strange constructs that had no relation to reality. Fractals are what is called self-similar. If you zoom in on a small part of one, you'll find the same, or at least a very similar, structure to the one you saw in the whole fractal. Mandelbrot's great stroke of genius came when he realised that this self-similarity also occurred in real life. The fluctuations of financial markets look similar whether you look at a graph representing a whole year, or just a week. Mandelbrot also found self-similarity in the random noise you get when transferring information between computers. Once his eye was sharpened, there was almost no end to the fractal patterns he spotted in nature: coast lines, galaxies, turbulence, and more. Forced to formalise his idea, Mandelbrot coined the word "fractal" and wrote down the maths in books that became the basis of fractal geometry.

The film doesn't shy away from the maths underlying Mandelbrot's work. We meet the Cantor set, Peano's space-filling curve and Sierpinski's gasket, all introduced in a natural and easy-to-follow way. It seems amazing that the mathematicians who discovered these shapes did not realise their potential as models for the natural world — a tribute to Mandelbrot's sharpness of mind. We also meet the theory developed at the beginning of the twentieth century by Gaston Julia and Pierre Fatou, which eventually gave rise to everyone's fractal favourite, the Mandelbrot set.

This film doesn't just describe one mathematician, or even one area of maths, but the process of doing maths. It's not about doggedly following procedures to solve equations, but about spotting connections between things far apart in their nature and in time, and finding the underlying, unifying principle. Mandelbrot is one of those mathematicians who made the right connections at the right time. The sleeve describes him as a "maverick mathematician", but I'd point out that unconventionality, of mind if not of action, is a prerequisite for genius and not at all unusual amongst mathematicians. Some experts will probably dispute the film's hailing of Mandelbrot as the sole father of fractal geometry. But for everyone else it will be a thoroughly enjoyable journey into the world of maths and fractal geometry.