Since they were first observed by Voyager II in the late 1980s, the skewed magnetic fields of Uranus and Neptune have mystified astronomers. Now a new mathematical model from researchers at Harvard University may have solved the mystery, and revealed these planets' hidden interiors.

Until Voyager II's trip to the outskirts of our solar system, it was thought that planetary magnetic fields would all be similar to Earth's. The Earth has a dipolar magnetic field, resembling that of a bar magnet which is roughly aligned with the rotational axis of the planet. Jupiter, Saturn and possibly Mercury all follow the pattern, while Mars shows signs of having had a similar field in the past.

But Uranus and Neptune buck the trend. Their magnetic fields are tipped over, with the magnetic poles lying closer to the equator than the rotational axis of the planets. And their fields are also considerably more complicated than those of Earth and the other planets. Rather than being like the field of a bar magnet, they are strongly quadrupolar - more like a combination of two bar magnets with two north and two south poles.

"The discovery that Uranus' and Neptune's magnetic poles are so different than the geological poles around which the planets rotate destroyed the paradigm set by Earth, Jupiter, and Saturn," says Jeremy Bloxham from Harvard University. Bloxham and coauthor Sabine Stanley, a graduate student from Harvard, have developed a model, published in a recent issue of Nature, that might explain the unusual magnetic nature of Uranus and Neptune.

By changing two aspects in the mathematical models used to model Earth-like fields, Stanley and Bloxham were able to simulate a magnetic field similar to that of Uranus and Neptune. Instead of a thick convecting layer around a small solid core, their model has a thin convecting shell around a larger inner core comprised of a stable fluid ocean surrounding a smaller solid centre. 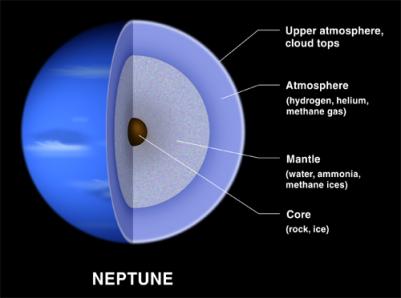 In the model, the fluid-ice mantle is divided into a thin convection shell lying above a stable layer.
Image from NASA

They believe that it is the stabilising effects of a solid conducting core in the Earth-like models that anchors the magnetic field and allows a stable dipolar field to be maintained. When a thin convecting shell sits above a fluid layer instead, the reduction in stability, and the relatively smaller scale at which convection can occur, result in more complicated magnetic fields like those seen on Uranus and Neptune.

Stanley and Bloxham will have to wait to test their model against real data from a future mission to Neptune or Uranus, and no missions are planned as yet. But they are looking for data closer to home - data from the magnetic fields of Mercury and Saturn due from MESSENGER and Cassini - to test their understanding of the role played by convective regions. If they and other astronomers can refine their understanding of the dynamo effect in planetary magnetism, it will help them look inside many planets in the solar system.