'What's happening in the mathematical sciences?' 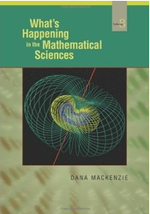 Dana Mackenzie's book is a display of modern mathematical developments. The author's way of presenting the material is vivid, simple and engaging. The narrative is illustrated by beautiful pictures. More often than not, in describing a mathematical problem, Mackenzie goes for the feel of it rather than for accuracy. This way of mathematical storytelling is not without its dangers: one should beware of giving the reader a false sense of understanding. Mackenzie, however, does a pretty good job of avoiding this. He has a remarkable sense of boundaries and knows where to stop being vague and where to just stop.

Recent developments of mathematics brought about the solutions of several old and important questions in number theory, topology and the theory of dynamical systems. More recent areas, related to finance and computer science, have also witnessed a lot of attention-grabbing events — some good and some bad. The book consists of nine chapters — each one an autonomous story about a particular mathematical development. Here's a brief overview.

The first chapter tells the story of a movie rental company's contest to develop an algorithm for predicting customers' likes and dislikes. Among other things, it demonstrated the strength of "crowdsourcing," as some of the competitors teamed up on their way to the finish. Contrary to the conventional wisdom of machine learning, some popular algorithms (such as nearest neighbour methods) fared badly and the prize went unexpectedly to a different method involving the factorisation of matrices.

We then move on to an entirely different area, the theory of dynamical systems. The story begins with a simple question: does a stretchy pendulum have periodic trajectories? The plot quickly thickens as we delve into magnetic monopoles — hypothetical particles that are magnets with just on pole — and interesting shapes from differential topology. Spoiler alert: yes, periodic trajectories exist.

The recent financial crisis is the focus of chapter three, which looks at the mathematical model of derivative trading which some people have blamed for the crisis. There was nothing wrong with the model (or, if you prefer, all models are wrong in some sense), but the investment banks forgot that it was only a model and treated it as the ultimate truth without any limitations.

There is more on dynamics in chapter four. It describes how billiard balls might behave on an infinite table and asks whether or not it is possible to send the ball to infinity. Other questions pertaining to the ball trajectories in such systems are also discussed. Billiards make another appearance in chapter seven, which looks at the theory of quantum chaos. It's well known what shape of billiard table leads to chaotic ball trajectories in classical physics. But the low-energy quantum mechanical analogue of this system is not chaotic at all. As we go to higher energies, the quantum billiard should approach its classical version, and thus we can be certain that chaos must emerge. But how it emerges has been an open question until recently. Surprisingly, the recent advance in this problem is owed to pure number theory.

Chapter five is devoted to statistics in a broad sense: mathematical models of patients that are used to supplement clinical trials in some areas of health care. The chapter is primarily about a 2009 breast cancer study, which found that the recommended frequency of mammograms is unnecessarily high. (Also see this Plus article for more on the subject).

Next up is randomness. Chapter six asks how to determine the mixing time necessary for a system, say the milk and coffee in your cup, to go from an unmixed to a completely random mixed state. There has been a recent breakthrough in calculating such a time for a model describing the behaviour of an array of magnets. The surprise is that the onset of randomness turned out to be quite abrupt.

Chapter eight looks at a favourite object with Plus readers: a body with only two equilibrium positions, one stable and one unstable, also known as the Gömböc, which has only recently been discovered (you can read about it in this Plus article). The chapter also looks at another recent advance in classical three-dimensional geometry: how to find the densest packing arrangement for regular tetrahedrons. Unlike in two dimensions, three-dimensional space cannot be covered completely by any platonic body but the cube, so the question of the densest packing is even more important.

Finally, chapter nine deals with high-dimensional topology. Mathematicians have recently tackled an old-standing mystery called the Kervaire invariant conjecture. This is one of the problems that make experts hearts beat faster but leave everyone else puzzled about what is going on. Very roughly speaking, the Kervaire invariant is a characteristic of a topological object, which can tell you whether or not you can sew a disk-shaped cap onto any closed loop that you cut into that object. The value of this invariant (which can only be 0 or 1) has long been found in all dimensions except 6, 14, 30, 62, 126, and so on (each one is an integer power of two minus two). The recent triumph consists of finding the invariant's value for all higher dimensions from this list (i.e. 254, 510, 1022, etc.)

You will need some knowledge of mathematics to read this book, at least you should know your maths to GCSE level. For those with a mathematical background – teachers, students, engineers or mathematicians – it will make a fascinating read.

On the pure mathematics side, “Prime Clusters and Gaps: Out-Experting the Experts” talks about new insights into the distribution of prime numbers, the perpetual source of new problems, and new results. Recently, several mathematicians (including Yitang Zhang and James Maynard) significantly improved our knowledge of the distribution of prime numbers. Advances in the so-called Kadison-Singer problem and its applications in signal processing algorithms used to analyze and synthesize signals are described in “The Kadison-Singer Problem: A Fine Balance”. “Quod Erat Demonstrandum” presents two examples of perseverance in mathematicians' pursuit of truth using, in particular, computers to verify their arguments. And “Following in Sherlock Holmes' Bike Tracks” shows how an episode in one of Sir Arthur Conan Doyle's stories about Sherlock Holmes naturally led to very interesting problems and results in the theory of completely integrable systems.

On the applied side, “Climate Past, Present, and Future” shows the importance of mathematics in the study of climate change and global warming phenomena. Mathematical models help researchers to understand the past, present, and future changes of climate, and to analyze their consequences. “The Truth Shall Set Your Fee” talks about algorithms of information exchange in cyberspace. Economists have known for a long time that trust is a cornerstone of commerce, and this becomes even more important nowadays when a lot of transactions, big and small, are done over the Internet. Recent efforts of theoretical computer scientists led to the development of so-called “rational protocols” for information exchange, where the parties in the information exchange process find that lies do not pay off.

Over the last 100 years many professional mathematicians and devoted amateurs contributed to the problem of finding polygons that can tile the plane, e.g., used as floor tiles in large rooms and walls. Despite all of these efforts, the search is not yet complete, as the very recent discovery of a new plane-tiling pentagon shows in “A Pentagonal Search Pays Off”. Mathematics can benefit coaches and players in some of the most popular team sports as shown in “The Brave New World of Sports Analytics”. The increased ability to collect and process statistics, big data, or “analytics” has completely changed the world of sports analytics. The use of modern methods of statistical modeling allows coaches and players to create much more detailed game plans as well as create many new ways of measuring a player's value. Finally, “Origami: Unfolding the Future” talks about the ancient Japanese paper-folding art and origami's unexpected connections to a variety of areas including mathematics, technology, and education.