What's so special about special relativity?

Mention Einstein and most people will be intimidated, assuming that they would need a degree in advanced physics to understand his work. But in fact the beauty of Special Relativity lies in its simplicity, which makes it one of the best-kept secrets in all of science. 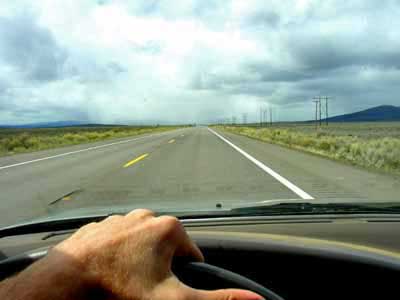 Imagine you're driving along the road at 50 miles per hour. Just for fun, you decide to throw a ball out of the car. If you throw it straight forwards at 10 miles per hour, how fast will it be going?

Now suppose that, instead of driving a car at 50 miles per hour, you are flying a spaceship at 50,000 miles per hour, and instead of throwing a ball out of the window, you allow a light particle to escape, travelling in the same direction as you. (The speed of light in a vacuum is normally denoted c, and it is about 670.76 million miles per hour.)

How fast is the particle of light travelling?

You and Newton would both have been wrong...

Most likely you would work out the answer the same way as for the car and the ball, and say that from your point of view on the spaceship the speed of the particle of light was 670.76 million miles per hour, whereas from the point of view of someone stationary (with respect to the most distant stars) it would be travelling at c+50,000 miles per hour.

These are the answers Newton would have given, and he was one of the greatest scientists of all time. But you and Newton would both have been wrong.

where u is 50 m per hour and v is 10 m per hour. But in fact this formula is not correct, although its inaccuracy only becomes apparent when the velocities involved are very high indeed. The formula that gives the right answer was introduced by Einstein: The two formulae give almost the same results when

is very small compared to

- but as the product gets closer to

the two answers become more and more different. And when one of the speeds,

Going back to our example of the light particle escaping from the front of a spaceship, this means that the speed of the particle of light looks the same to someone in the spaceship as to a stationary observer - the considerable speed of the rocket has made no contribution whatsoever!

It seems totally counterintuitive that the speed of light remains a constant, whatever the relative speed of the source and the observer - but it is backed by enormous amounts of evidence. But even more counterintuitive are the consequences for our understanding of time...

To see the consequences for our understanding of time, we need to measure time using velocity, rather than the other way around, as is more usual. Our clock will consist of two mirrors and a beam of light. If the distance between the mirrors is d, then the time it takes for the light beam to travel from one mirror to the other is

So what does Alice see, sitting on her train? For her, everything outside looks like it's moving, but everything inside is stationary, except for the moving light beam. So far so good.

To understand what Bob sees, imagine that the two mirrors have been placed so that one is vertically above the other, and so that a straight line through them forms a right angle with the floor of the train. Now for Alice, the light beam just moves up and down along this vertical line. But for Bob, because the train keeps moving, by the time the beam of light gets to the other mirror, both mirrors have moved! So instead of seeing the beam of light moving vertically up or down, he sees it travelling along a diagonal line:

Oh dear! (No point pulling your hair out, Bob, it's all relative!)

Poor old Bob decides he'll have to do his own calculation. Because the beam of light looks like it's moving diagonally, he decides that the distance the light has to travel isn't really d. He decides to call it D instead. Also, he decides that the time taken to travel between the mirrors isn't really t. He calls it T instead. But the speed of light is the same for both Bob and Alice (remember?), so Bob still calls it c. 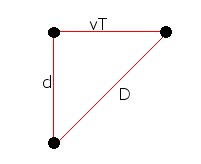 Luckily, he remembers Pythagoras's Theorem and uses it to work out what D is: He also knows that

. So he works out that

. Rearranging,
What Bob is seeing is a consequence of Special Relativity known as time dilation.

So what does this mean? Bob has seen Alice's clock, and he knows that it takes t seconds for the light to travel between the mirrors. But from his observation point outside the train, it looks to him as though it takes T seconds. Alice sees the clock working as expected, but because Bob is not with Alice on the train the clock on the train looks like it's running too slowly.

What Bob is seeing is a consequence of Special Relativity known as time dilation. To him, it appears that time on the train is running slowly. But now suppose that Alice gives him the clock, he sets it working by the side of the railway track, and she observes it from the train as she passes. All the same results hold - to Alice, it appears that the clock is going slow! In other words, both Alice and Bob observe time slowing down for the other! 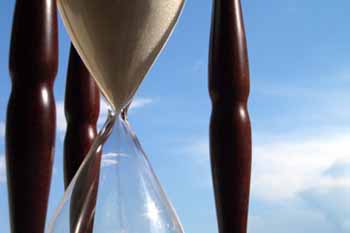 How to measure time?

So what causes this madness? Are the laws of physics different for Alice in her moving train than they are for Bob in the stationary landscape outside? Surely not! Yet something happens as one looks across from his or her environment to the other. In the language of physics, the difference between Alice and Bob is that they are in different inertial frames of reference.

The laws of physics are the same in all inertial frames - including the speed of light.

Everything's hunky-dory if we work inside one inertial frame. But all bets are off if you observe an experiment from one inertial frame when it is happening in another - as is the case for Alice and Bob, or when you look out of the window of a spinning rocket and see stars accelerating past you even though they are acted on by no forces.

All this might seem a little hard to believe, but by carrying out sophisticated experiments scientists have confirmed that this incredible thing does happen. Even Einstein found it hard to believe, because it goes against common sense.

The brief but eventful life of the Muon 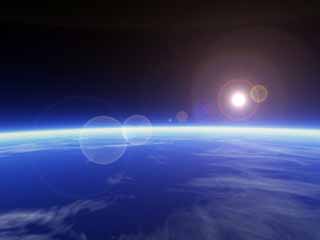 Muons are created high in the Earth's atmosphere

Muons are particles created high up above the Earth's surface by cosmic rays hitting the atmosphere. They can be detected in large numbers at the Earth's surface. They travel at around 0.998 times the speed of light, but they don't live for very long - typically, they decay after only

seconds. Multiplying their speed by their lifetime, they should only travel 600m before dying - but they are produced 6,000m above the Earth!

So how come we are able to detect them at the Earth's surface? The answer is time dilation. In our frame of reference the lifetime of the muon is extended from

And in this time a muon can travel 9,500 metres - far enough to reach the surface of the Earth! 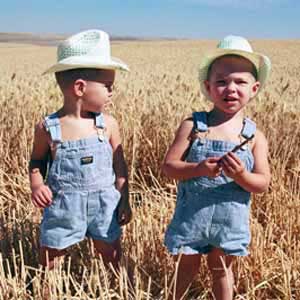 This is the story of twins Peter and Paul. Paul makes a round trip in a high-speed spaceship and leaves his brother Peter on Earth. With the help of his telescope, Peter watches Paul whizzing through space. As a result of time dilation, Peter sees that Paul is aging more slowly than he.

In fact, the situation is not symmetrical: only the twin who stays at home is in an inertial frame. Paul experiences acceleration (that is, changes in velocity) as his rocket leaves Earth, turns around and comes back. In general, accelerated clocks (or clocks in gravitational fields) will go slow relative to unaccelerated clocks (or clocks feeling no gravitational fields). So the twin that feels the accelerations will age more slowly than the one who doesn't.

If Paul managed to maintain a constant velocity of 80% of the speed of light, by the time he returned home, he would be 6 years older, while Peter would have missed him for 10 years. Of course, it's unlikely that anyone could reach such a high speed, but it does make you wonder... 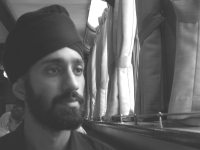 Hardeep Aiden is a graduate of the Department of Mathematics at Imperial College, London. Apart from mathematics, he is interested in languages and linguistics, and is currently learning Japanese, French and British sign language.
Read more about...
relativity
Einstein
special relativity
time dilation
relative velocity
inertial frame
muon
twin paradox

Confusing.
"Muons are particles created high up above the Earth's surface by cosmic rays hitting the atmosphere. They can be detected in large numbers at the Earth's surface. They travel at around 0.998 times the speed of light, but they don't live for very long - typically, they decay after only $2 \times 10^{-6} = 0.000002$ seconds. "

Where did 0.000002 seconds come from/calculated or was measured in which frame.?

The lifetime of muons

The lifetime of muons (0.000002 second) can be measured in experiments, see for example http://www.particle.kth.se/~pearce/muonlab/muonlab.pdf It's because of the relativistic effects described in this article that time passes differently for the travelling muons than it does for us. Hope that answers the question!

It does not answer.
Did the entire lab travel at the same speed that the muon?
In which case it makes sense that they measure 0.000002 s. Otherwise they "measured" something else, strictly speeking.

Incredibly well explained! I've read many different author's explanation of how special relativity works (and also watched explanations in "Cosmos" and the movie "Insignificance". This is the first time I've felt even a little dint of understanding penetrate my brain. Thank You!