'Why beauty is truth' 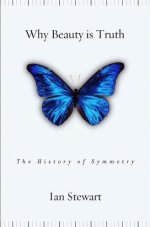 Why beauty is truth: The history of symmetry

I suspect maths in primary school would be greeted with far more enthusiasm if students had Ian Stewart as a teacher. Any man who can explain electromagnetism, gravity and atomic nuclear forces in terms of a piggy fridge magnet and a smashed kitchen plate is, surely, a communicator to be reckoned with.

To describe how our knowledge of symmetry has developed through mathematics, the book follows a broadly chronological structure. Starting with the Babylonian discovery of quadratic equations and concluding with string theory, Stewart follows the work of some of the greatest mathematicians of each era as they pieced together a particularly colourful puzzle. He continually emphasises the importance of asking "why?" It is not enough to prove or disprove a mathematical conundrum; equally, if not more, important is the reasoning behind it. A stepwise progression of "whys" brings us from solving the quadratic equation to failing to solve the quintic equation, from group theory to quantum theory. Each mathematical stage is set in the context of its discovery. Perhaps understandably, Stewart does succumb to the temptation to jump around within each of the eras he examines. Some of his tangents make you feel a bit as if you were in a gloriously messy attic full of fascinating distractions: wonderful, if, at times, a little disorientating.

What makes the book a compulsive read is that Stewart combines the advances in mathematics with the stories of their discoverers, who could be described by the author's preferred collective expression as "a muddle of mathematicians". These compulsive characters are almost archetypal: the romantic, doomed Frenchman dying in a duel over a woman (Evariste Galois); a brilliant yet impoverished academic (Niels Henrik Abel); and, my favourite, a drunken Irishman who "set out to invent an algebra of three dimensions but realised, in a flash of intuition that caused him to vandalise a bridge, that he would have to settle for four dimensions instead" (William Rowan Hamilton). Driven by the compulsion to solve mathematical riddles, they are united by similar qualities: perseverance, obsession, and the kind of genius that seems inevitably to lead to tragedy on an epic scale. Their experiences add a very human dimension to the story.

As it was to the mathematicians themselves, the implications of their work remain hidden for much of this history. Although implicit in some of the observations, it is not until Evariste Galois's group theory that symmetry, at the heart of the story, makes a definite appearance, and it is not until the physicists show up that the mathematical beauty of symmetry assumes its role as the means by which our universe can be described. This approach works well, and has an obvious parallel in the more abstract branches of mathematics, where the scope of an idea may only be fully appreciated or applied to the practical world retrospectively. As the concluding chapters show clearly, modern physics leans heavily on such mathematical advances. With the advantage of such hindsight, the reader is left with a sense of how much poorer our knowledge of the world would be without mathematics.

In terms of readership, Why beauty is truth is marketed under the much-used term "popular science". I am not entirely sure this is an appropriate label; if you were searching for a book to hand over to a baffled and mathematically challenged loved one to explain your fascination of maths, this would not be it. This limitation is not due to the style of writing, which is engaging, clear and, at times, unexpectedly humorous. Nor is it the subject matter, which I cannot fault. If the book has a flaw, it is that 280 pages are not quite enough to encompass the 5000 years of mathematics without skimming a little, and some of the technical terms, crucial if the reader is to keep up, are introduced only briefly.

The book covers a huge range: ostensibly about the history of symmetry, it also includes truth, beauty, and the quest for a Theory of Everything. It is actually emotionally moving to read a vindication of abstract mathematics, and the enormity of its contribution to human knowledge. Ian Stewart himself summarizes how the innate human instinct for symmetry translates into a deeper understanding of the world: "The true strength of mathematics lies precisely in this remarkable fusion of the human sense of pattern ('beauty') with the physical world, which acts both as a reality check ('truth') and as an inexhaustible source of inspiration.

Charlotte Mulcare read Biological Anthropology at Cambridge, and has recently completed a PhD at University College London in human genetics. The project used DNA sample from modern populations to trace the migration and selection patterns in Neolithic farmers. She currently works as a science writer (fact and fiction!) and lives in Oxford.