Why wait a second?

Rejoice! Today, June 30th 2015, will be one second longer than other days. The extra leap second was announced a few months ago by the impressively-named International Earth Rotation and Reference Systems Service. But why do we need it? 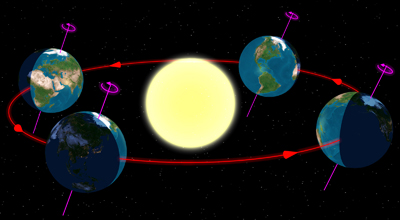 The reason is that the Earth doesn't behave as reliably as you might think. A natural way to define the length of a day is as the period of time that elapses between high noon today and high noon tomorrow. That period would be the same every day if the Earth was moving around the Sun at a uniform speed and along a nice round circle, with its axis at right angles to the plane defined by that circle. But it isn't. The Earth's orbit is in fact elliptical and the axis of the Earth tilted by some 23.5° from the perpendicular to the plane of the orbit. Together these two factors mean that the length of an apparent solar day varies throughout the year.

Since time shouldn't behave in such a disorderly fashion people have introduced standardised measures such as Greenwich Mean Time, which basically chops the period of a year into equally-sized lumps called days. It doesn't always agree with apparent time: around February 12th the Sun is behind GMT by about 14 minutes and around November 3rd it's ahead by about 16 minutes. On average, though, things do even out.

The real problem with time measurement is that the Earth's rotation around its own axis, which is obviously complicit in defining time using the path of the Sun in the sky, isn't regular. In fact, it's been slowing down at a rate that's punctuated by random fluctuations. If you want truly regular time keeping, you better forget about the Earth and define time using something that behaves with perfect regularity: like the resonance frequency of the caesium atom. It's what the International System of Units (SI units) uses, defining a second as

The leap second is inserted in order to even out the difference in time measured with reference to the heavens and with reference to atoms. To be precise, it's there to even out the difference between Universal Time 1, the successor of GMT, and International Atomic Time (TAI) as defined by a network of carefully guarded atomic clocks around the world. The resulting time, TAI with leap seconds added, is called Coordinated Universal Time. The leap second makes sure that, on average, the Sun appears above the Greenwich meridian at 12 noon Coordinated Universal Time, give or take at most a second.

This is reassuring, but some people worry about leap seconds' potential to confuse computers. Because the fluctuations in the Earth's rotation are random, it's impossible to predict when a leap second needs to be inserted in the long run. A six-month warning is the best the International Earth Rotation and Reference Systems Service can do. This, however, might not be enough time for computer systems to be adjusted to cope with the extra second. Back in 2012, the last time a leap second was added, websites including Mozilla, Reddit, LinkedIn and Yelp were affected, and in Australia flights were delayed as automated check-in systems failed. There are also worries about the financial markets in which, quite literally, every second counts. (Find out more On the BBC website).

Some people have argued that it is time to let go of astronomical time in favour of atomic time. No leap seconds would ever need to be added then. But there are advantages to sticking with the stars: as the rotation of the Earth continues to slow (punctuated by random blips) an astronomical day will get longer and longer — and in around 140 million years (according to Wired) you'd have a whole extra hour to relax after work.