Why is the violin so hard to play?

How to observe Helmholtz motion for yourself 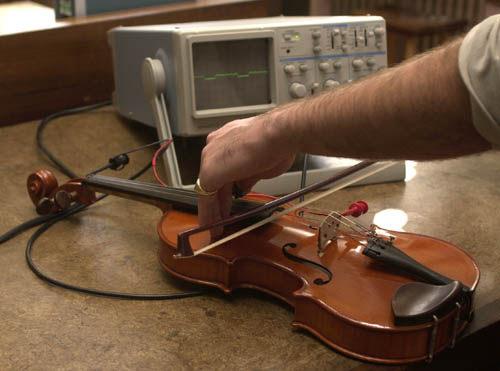 The experiment being carried out

Armed with a violin and bow, an oscilloscope, and a small bar magnet, it is easy to observe Helmholtz motion and other bowed-string effects. Choose a string with a metal core or covering, so that it conducts electricity. Attach wires to the ends of the string away from the active vibrating portion: that is, in the peg-box or behind the violin bridge. Connect the wires across one input channel of the oscilloscope. Bow the string, and hold one end of the magnet close to the vibrating string without touching it. As the string moves through the magnetic field near the end of the magnet, a voltage will be generated by Faraday induction. This voltage is proportional to the velocity of the string near the magnet. The voltage will produce a waveform on the oscilloscope. The experiment works best if you use the strongest magnet you can find, and turn up the gain on the oscilloscope to its maximum, because the voltage from the string is not very large. 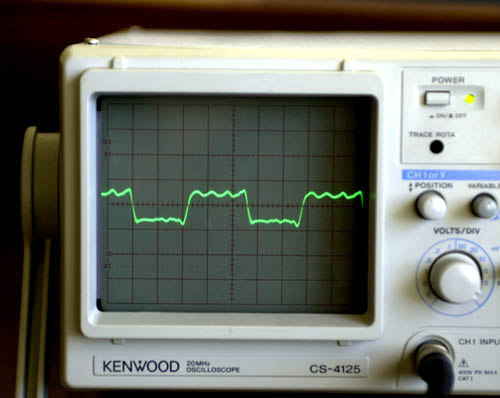 Typical image from the oscilloscope when the magnet is held near the centre of the string. The small ripples which can be seen superimposed on the square wave are caused by waves on the string reflecting from the bow. Move the bowing position along the string and you should see the ripple period change.

How did Helmholtz observe the motion?

In the nineteenth century, Helmholtz did not have the possibility of using an oscilloscope to observe string vibration. Instead, he made a kind of mechanical stroboscope. He used a string which was blackened except for a white dot, and he observed it in a dark room through a microscope attached to a vibrating tuning fork.

Modern technology offers an easier to way to do a similar direct observation: if you have access to a strobe light with a flashing frequency which can be varied, you can use it to illuminate a bowed string. By choosing a flashing frequency close to the string frequency but not quite the same, you can show the string vibration in slow motion. The travelling Helmholtz corner is most easily seen if you look along the length of the string, rather than looking at it from the side.