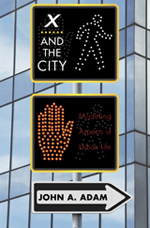 X and the City: Modeling Aspects of Urban Life

By John A. Adam

From the writer of A Mathematical Nature Walk comes an exploration of urban landscapes, providing a fresh view on metropolitan life. X and the City by John A. Adam comprises an array of short problems across a vast collection of topics, seemingly illustrating how a basic knowledge of calculus allows us to tackle even the most obscure question relating to cities.

The idea of modelling aspects of urban life, as the book is subtitled, is probably an unknown to most people, including most mathematicians. At first thought, it may conjure up images of architects rather than mathematical derivations — but you shouldn't let the title put you off. X and the City tackles numerous interesting and easy to understand questions. For example, Adam helps you think through how many doctors' offices might be found in a city of a certain size, and leads you to grapple with the chances your city will be hit by an asteroid. Indeed, one of the great benefits of a book about mathematical modelling is that, by very definition, you begin in the real world. As a result, we are presented with questions that can easily be understood by, and are relevant to, everyone. This, combined with the relative simplicity of the techniques used, makes the book accessible to almost everyone.

The book itself is broken up into twenty-five chapters, each tackling a specific set of problems relating to urban life. Focus is given to topics including driving, air population, population growth, and natural disasters. Often you'll be hard pressed to find the results elsewhere. Within each chapter, a plentiful supply of problems can be found, each given its own smaller section. As I began reading, I felt organising the book in this manner was valuable for several reasons. Primarily, it allowed me to pick up the book and read small chunks as I pleased, a fact that became especially useful considering that some of the more challenging derivations required a bit of thinking time.

I initially felt I would also benefit from this structure as it would permit me to be selective about which problems I read. After all, the book was filled with modelling scenarios, and it seemed unlikely that I'd be enthralled by all of them. Some may be excited by the prospect of computing how quickly traffic backups increase in length, while others might prefer to estimate the number of squirrels in Central Park. Undoubtedly, this will prove to be the case for some readers, but in the end I found that Adam's humorous and fun writing style meant I didn't skip many problems. He writes throughout in an extremely informal manner that again makes this book accessible to those without advanced mathematical knowledge, and keeps the reader entertained.

Some may levy criticism at the book for its repetition at times, but I actually found it highly impressive that such a small set of mathematical tools could be used for such a wide array of city-based problems. Furthermore, it is quite remarkable how simple models can prove to be so illuminating and often accurate.

That being said, whilst the book is marketed as suitable for anyone with some knowledge of calculus, which holds for the most part, at times the calculations do become complex. The early chapters begin with what can be considered "back of the envelope" calculations involving simple formulae, but as the book advances the mathematical tools employed advance significantly. Some may find the problems a little hard going, especially without a pen and paper to hand. However, even if you don't delve too deep, it's still not too difficult to follow the discussions.

For those with advanced mathematical training however, this book can be seen as a thought-provoking answer to the old question of "what do we need this for" aimed at fields such as linear algebra. Moreover, whilst this book should certainly appeal to fans of pop math texts, I would also highly recommend it for any budding mathematical modellers. The procedure by which Adam glides from a question to a suitable differential equation with stated assumptions, and revises it as needed, provides a brilliant introduction to more complex mathematical modelling. Furthermore, the book may well prove useful to anyone preparing for interviews, be it university admissions or for a job, since the unusual nature of many of these questions are not unfamiliar in this arena.

In conclusion, X and the City may at first glance not appeal to everyone, but I urge you to give it a try. It is filled to the brim with novel and peculiar explanations that demonstrate how mathematics can play a key role in areas of life that you may not have considered. You may well come to have a new found appreciation of your city.

Michael J. Grayling is a PhD student at the University of Cambridge. He is working on clinical trial design.