'From zero to infinity' 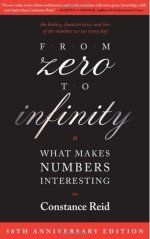 From zero to infinity: what makes numbers interesting

What makes numbers interesting? The subtitle of this beautiful book is the motivation, map, and message of its 188-page journey from zero to infinity. With concise insight, Reid takes the digits from 0 to 9 as chapter titles and starting points of voyages into the history and deep concepts of modern mathematics. This new edition marks the 50th anniversary of the book's publication and contains a new chapter on the transfinite cardinal ℵ0 (aleph zero), complimenting an earlier addition of a chapter on Euler's number, e.

You may be disappointed if you only want a book telling you interesting things about the numbers themselves. The number lore, for example "The Romans attributed the number six to the goddess of love," is incidental to the main themes: patterns, problems, and propositions associated with numbers, and the passion with which we have been attracted to them for thousands of years. (Reid stresses the antiquity of mathematical thought with frequent praise for the ancient Greeks.) Each digit, as well as the two numbers ℵ0 and e, is used to introduce at least one new mathematical concept. Thus armed, a pleasing number of theorems can be introduced. Some are proved in the book, some require an undergraduate degree in mathematics, and some are as yet unproved and here stated with a tone of challenge to the keen reader.

This book is challenging: no spoonfeeding of easy concepts and fashionable analogies here. The book conveys the beauty of numbers and the theories we build around them with as much detail as possible, while encouraging the enthused reader to learn more themselves. Each line must be read carefully because not a word is used needlessly. This effort is repaid: each chapter could be the equivalent of a great mathematics teacher in its potential to excite a new generation of people about mathematics.

Chapter "Four", for example, begins with the simple but startling sentences "Two times two is four. This is the most interesting fact about the number four, and it is very interesting indeed." Four is the first perfect square (excluding the trivial 0 and 1), and so begins the reader's rapidly ascending journey. Despite that speed and height, one never feels rushed or dizzy because Reid's writing is clear and clean. After spending some time with the geometric thinking of the Greeks (subject for a book in itself), we fast forward to Galileo Galilei, the famous Italian astronomer and co-inventor of the telescope, working around the turn of the 17th century.

A towering figure of scientific history, Galileo also pioneered the writing of fun scientific articles for the general public. (He probably only did so to avoid, unsuccessfully, the wrath of the Church but popular science certainly took off.) Reid points out that Galileo was a mathematician who founded the basis of what would become a theory of infinite sets centuries later. Galileo observed that every square number can be attached to a positive whole number: we attach 1 to 1, 4 to 2, 9 to 3, and so on. Each square number is attached to its positive square root so that each square is attached to a single number, and no number is attached to more than one square. This process of attaching positive whole numbers to things in sequence is what we call "counting"; Galileo had realised that you can count the square numbers. But this is very strange, even worrying. Our common sense says that there are many more positive whole numbers than there are square numbers, and yet they pair up perfectly, meaning that there must be the same number of each!

Galileo side-stepped the issue by suggesting that the notion of equality does not apply to the infinite, and it isn't until the ℵ0 chapter that we learn that the real issue is that there are different sizes of infinity, and that it makes sound mathematical sense to say that there are the same number of positive whole numbers as there are square numbers, odd numbers, or even fractions.

At this point, "Four" has barely got going. We will encounter the great names of Pythagoras, Diophantus, Fermat, and Gauss. The latter is probably the greatest mathematician who has yet lived, and his influence is felt throughout the book. This influence is matched only by Euler, whose number e is a chapter title. Fermat was probably the first deep thinker about number theory, despite a full-time job as a lawyer in 17th century France. His annoying habit of not writing down proofs means that his propositions have kept mathematicians busy for the past few centuries. Like all chapters, "Four" concludes with problems for the reader; not repetitive examples of applying a rule, but real tests and encouragements to think. This is, after all, what mathematicians do: think.

Where is the infinity of the title? It is everywhere in the book. We see Euclid's exciting proof of the infinity of primes, and infinitudes of other types of numbers are discussed, as are still-unanswered questions about whether, for example, the number of perfect numbers is infinite. Perfect numbers are the sum of all their divisors apart from themselves and are introduced in "Six", the first perfect number. The final two chapters take us explicitly to infinity (and beyond). Euler's number is irrational: it cannot be written as the ratio of two whole numbers. Its decimal expression therefore not only never terminates, but we have no way of knowing what the nth decimal place is before we work it out. This chapter discusses the Prime Number Theorem, one of the most beautiful and amazing theorems in mathematics, linking this strange beast e with the way the primes are scattered amongst the whole numbers. The final chapter treats ℵ0, a measure of the size of one infinite set, and opens the door to previously unimaginable ideas such as different sizes of infinities.

I was surprised to find one or two spelling mistakes in the fifth edition of a book, including one in the middle of a formula, but this is my best attempt to present a balanced review of this wonderful book. As the numbers increase, the complexity of the mathematics does also, but never does the clarity or excitement decline. The enthusiasm and erudition of the author, not a trained mathematician, penetrate past the sparkly but more minor issues to the real core of mathematical thought. Densely-written, insightful books which reward careful reading with a sense of the beauty, vastness, and mystery of mathematics are rare, but this is one.

Phil Wilson uses mathematics to understand how the skin of red blood cells works. The people he works with at the University of Tokyo hope that they can use this understanding to invent better ways of delivering medicine to the body.