When learning about existing mathematics, and especially when trying to produce new mathematics, we spend a lot of time thinking about examples. How do parts of the example interact with each other? What are the regularities and symmetries? Does it come in a family of examples, or does it live on its own? In many cases, the first thing to do is to try and draw a picture. We are both geometric topologists, working mostly with two and three-dimensional objects. As such, two-dimensional pictures are important currency in our field. These pictures are typically drawn on blackboards, on pieces of paper, and even on tablecloths and napkins, as famously depicted in Douglas Adams' discussion of Bistromathics.

A natural extension of drawing in two dimensions is drawing in three dimensions. In this direction, we have been using 3D printing as an aid to visualising mathematical objects. We design sculptures that help us and others to understand the mathematics better. Also, these sculptures are beautiful in their own right!

Here are a few favourite examples.

Half of a 120-cell depicts a projection of the 120-cell, one of the four-dimensional regular polytopes (from the Greek — "poly" for many, "topos" for place). 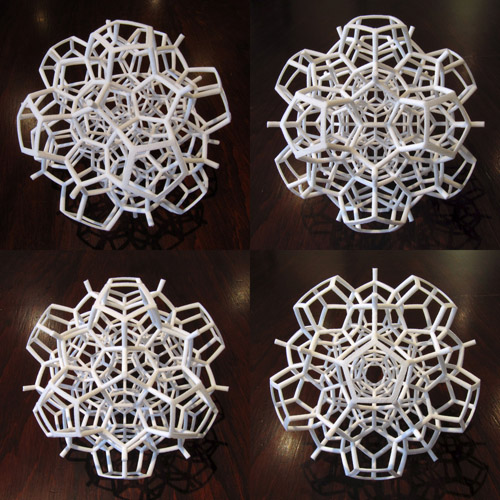 To understand how to project this four-dimensional object into three-dimensional space, we need to develop some intuition from lower dimensions.

In dimension two the corners of a square sit on a circle which contains the whole shape. If we place a light at the center of the circle, the edges of the square cast shadows on the circle.

In dimension three, a cube sits inside a sphere. We arrange the cube so that one of its square facets is horizontal, with the North pole directly above the facet's center. Now we place a light at the centre of the sphere. The edges of the cube cast shadows onto the sphere, making a "beach ball cube". We delete the cube, and concentrate on the beach ball version. Move the light to the North pole. The edges of the beach ball cube cast their shadows on the horizontal plane: the plane the sphere is sitting on. This last step is called stereographic projection, from the sphere to the plane. See figure 3 below for pictures of this process. 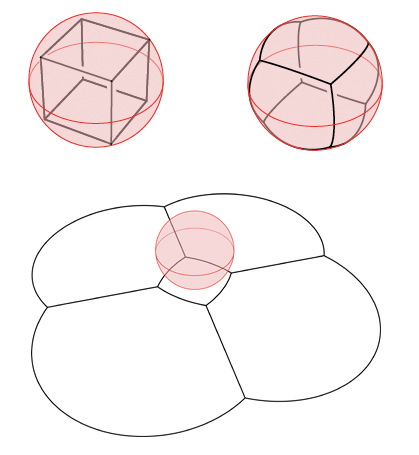 Figure 3: Projecting a cube onto the plane.

Finally, in dimension four, the 120-cell sits inside a three-sphere (the unit sphere in four-dimensional space). By casting shadows out from the center of the three-sphere we make a "beach ball 120-cell". We use stereographic projection to get the beach ball 120-cell into our ordinary three-dimensional space. This gives the rightmost image in figure 2.

Note the massive complexity near the center. This cannot be printed using current technology — at least not within our budget! We came up with the following idea: we cut the projection of the 120-cell in half along a sphere, and we threw away the outside. The result is shown in figure 1. You can find out more in this movie:

The internal structure is now visible. In addition, the ratio between the diameter and the smallest features is much more reasonable, making the sculpture printable.

After playing with Half of a 120-cell for quite a while, we were inspired to design a family of interlocking puzzles which we call Quintessence; here chains of dodecahedra living in the Half of a 120-cell are combined to build various structures. 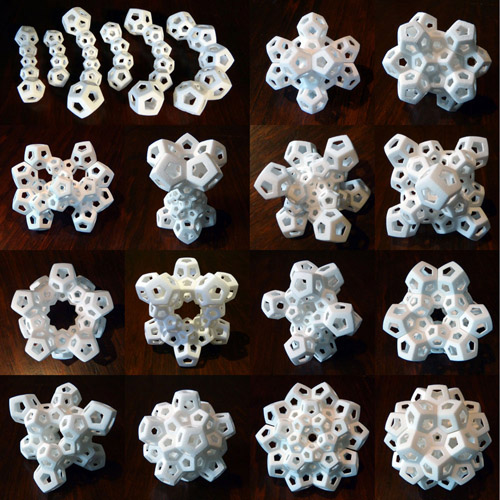 Figure 4: Quintessence; copies of the six "rib" pieces shown in the top left can make all of these puzzles.

See how the puzzles work in this movie: 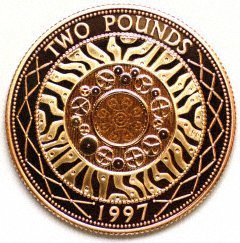 Figure 5: The reverse of a two pound coin.

Triple Helix (figure 6) is a mechanism with three helical gears, meshing in pairs, all at right angles to each other. There is an amusing mistake in graphic design, where three (or any odd number) of planar gears are arranged in a circle. Perhaps the best known example is the reverse of the two-pound coin (see figure 5), designed by Bruce Rushin, which shows 19 gears that symbolise the Industrial Revolution. The mistake comes from the fact that neighbouring gears must rotate in opposite directions. Thus any circle with an odd number of planar gears is frozen! Triple helix is one solution to this paradox. 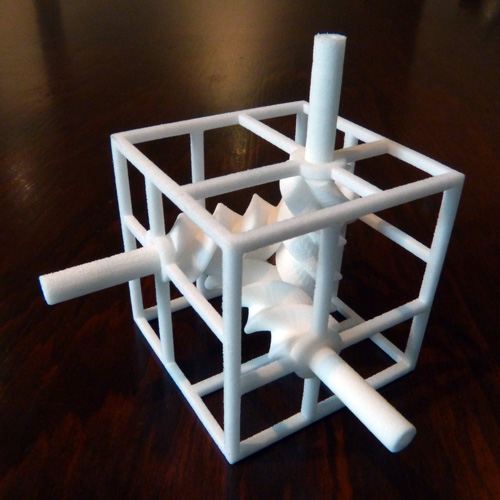 Another, more complicated, solution titled Triple gear (figure 7) involves using three toothed-rings, all pairwise linked. Unlike our other work, these sculptures move. For much more on Triple gear and related mechanisms, check out our paper on the subject, which appeared in the Proceedings of the 2013 Bridges conference on mathematics, music, art, architecture and culture. 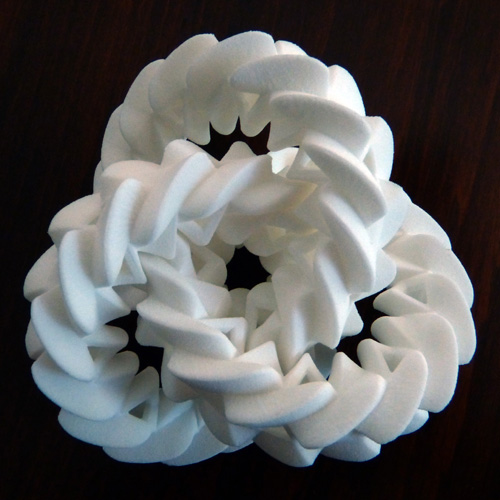 The triple gear in action:

Round Möbius strip answers another puzzle — it is a Möbius strip with a circular boundary! Famously, the Möbius strip can be made by taking a long strip of paper, giving it a half-twist (twist by 180 degrees), and gluing the two short edges together (see this Plus article for more information). The resulting object has a single edge and one side. Unlike an ordinary piece of paper, you do not need to cross an edge to get from one side to the other side. The boundary of the paper Möbius strip describes a curve in space; this curve is not geometrically a circle, but it can be deformed into one. This movie illustrates the idea:


Our sculpture shows what happens when you drag the surface of the Möbius strip along as you "straighten out" the circle. We have also dragged one point of the strip to infinity to bring out the symmetries of the Möbius strip, but you can see the round circle at the centre — this is the boundary of the original Möbius strip. 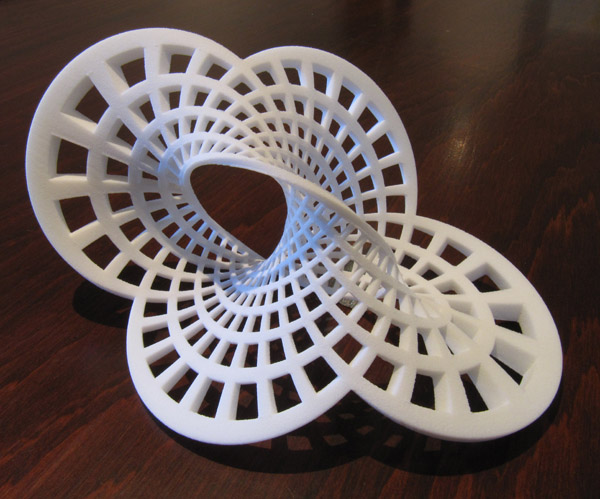 Figure 8: The "round" Möbius strip.

3D printing is a term that covers a number of closely related technologies, also known as additive manufacturing. In all of these the idea is to build a physical object up, layer by layer, starting from nothing. This contrasts with more traditional subtractive manufacturing, such as lathing or carving. Complicated internal structures are difficult to make in subtractive manufacturing, but are easy in additive manufacturing. When subtracting, the object can get in the way of the carving tool. When adding, the print head always works from above, and at each moment the printed layers are below. Intricate details are now just a matter of persistence on the part of the designer; at the manufacturing stage it is as easy to print a block as it is to print a delicate filigree occupying the same volume.

The printing process is almost entirely automated, which means that the printed object very closely approximates the computer design. For us, this means that our prints are very close to the mathematical ideal. Many of our sculptures are entirely or almost entirely generated by (Python) code that directly expresses the desired geometry. Thus the mathematics described by our programs gets translated into physical objects with very few choices or possibilities of error.

However, there are limits to what 3D printers can do. There is a basic tension between the minimum feature size and the overall size of a sculpture. As we learned from the 120-cell, if some features are too small then the sculpture will have parts that are fragile or perhaps just unprintable. The easiest solution to this problem is to scale the design up -- however if the resulting volume is too large the sculpture will be too expensive and perhaps again unprintable (if it does not fit inside the printer).

Getting into 3D printing is becoming easier and easier. These days many schools and universities, and even hobbyists have 3D printers. There are also many 3D printing services that let you upload a model, which they then 3D print and send to you. In addition one of us (Segerman) has given a workshop on 3D printing, using the programs Mathematica and Rhinoceros. The workshop materials are available here.

These include a preprint of the paper 3D printing for mathematical visualisation that appeared in the Mathematical Intelligencer.

Ideas for the future

We are currently thinking about objects that move, or that can be taken apart and played with. Such sculptures play to the strengths of physical objects as opposed to pictures or even computer animations. As an example of cool stuff that wants to be 3D printed we mention planar linkages — a fascinating piece of engineering along these lines is the Chaos machine of Robert MacKay. We are also thinking of sculptures based on hyperbolic rather than spherical geometry, and about the favourite knot of hyperbolic geometers, the figure-eight knot. 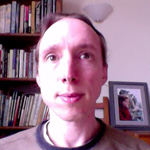 Saul Schleimer is a geometric topologist, working at the University of Warwick. His other interests include combinatorial group theory and computation. He is especially interested in the interplay between these fields and additionally in visualisation of ideas from these fields. 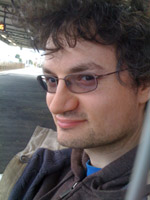 I enjoyed your article, and the wonderful mathematical puzzles and objects you have created.
Will you be posting the relevant STL files on Thingverse (http://www.thingiverse.com) or somewhere else? It would be wonderful
if you could share the source files. I would love to try to print out your 3 helix puzzle/art design.

I will guess that the

I will guess that the interlocking of the pieces is, on its own, insufficient to make these "burr" puzzles. In the classical sense, burr puzzles connote (at least, to me) notched pieces where the notches play an integral part in the assembly.

3D printing has gone crazy. I love what people has done with it. Am planning on buying one.