This year's Abel Prize has been awarded to Andrew Wiles "for his stunning proof of Fermat's Last Theorem [...] opening a new era in number theory." 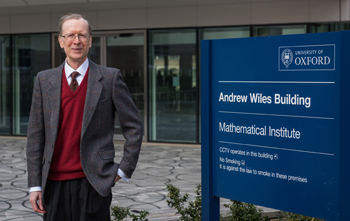 Andrew Wiles outside the Institute of Mathematics at Oxford University, named in his honour. Photo: John Cairns.

The honour comes over 20 years after Wiles first announced his breakthrough, but the result itself is linked to maths that is over 2000 years old. Most people have heard of Pythagoras’ theorem: if

are the sides of a right-angled triangle, with

the side opposite the right angle, then

There are infinitely many triples

of natural numbers which satisfy this equation. Examples are

They are called Pythagorean triples.

Fermat’s last theorem looks at similar equations but with different exponents. Are there triples of natural numbers that satisfy

More generally, can we find triples of natural numbers that satisfy

. In 1637 he wrote into the margin of his maths textbook that he had found a "marvellous proof" for this fact, which the margin was too narrow to contain. That tantalising scribble was to taunt mathematicians for a long time.

Andrew Wiles first came across Fermat's last theorem as a ten-year-old in a library book. "I knew from that moment that I would never let it go," he said. "I had to solve it."

When Wiles finally announced his proof in 1993 at the Isaac Newton Institute in Cambridge, he had spent seven years working on the problem in secret, avoiding the attention he would have attracted had he admitted to what he was doing. In fact he had been working on a more general problem, called the Taniyama-Shimura conjecture, whose solution implied Fermat's last theorem, but which was considered pretty inaccessible by most mathematicians at the time. As it turned out, Wiles' proof contained a flaw which took another year and help from a former student, Richard Taylor, to fix. But in the end the 357-year-old-problem yielded to the sophisticated techniques Wiles had developed to crack it, and those techniques have found wider use within mathematics.

The Abel Prize is one of the highest honours in mathematics, carrying a cash award of 600,000 Euros (over £468,000). It is awarded annually by the Norwegian Academy of Science and Letters. Wiles will receive the prize from Crown Prince Haakon of Norway at an award ceremony in Oslo on 24.

You can find out more about Andrew Wiles and Fermat's last theorem in these Plus articles:

"[...] and those techniques have found winder use within mathematics."

- From the Abel Prize site link: "Andrew J. Wiles is one of very few mathematicians – if not the only one – whose proof of a theorem has made international headline news."
- Given this fact, along with the general notion that Dr. Wiles is such a deserving award recipient, why has there been a 20-year delay (12-year if one considers that the Abel Prize didn't exist before 2004) to name him a winner? His initial error was corrected by 1995, and I haven't heard contention that his proof is illegitimate. Are there some bureaucratic or other factors at play?

There are have been equally-deserving candidates who made their contributions even before Prof Wiles did. I doubt that making the newspaper headlines is the primary, or even the secondary, criterion which the prize committee takes into consideration.