Mathematical billiards is an idealisation of what we experience on a regular pool table. In mathematical billiards the ball bounces around according to the same rules as in ordinary billiards, but it has no mass, which means there is no friction. There also aren't any pockets that can swallow the ball. This means that the ball will bounce infinitely many times on the sides of the billiard table and keep going forever.

One fascinating aspect of mathematical billiards is that it gives us a geometrical method to determine the least common multiple and the greatest common divisor of two natural numbers. Have a look at the Geogebra animation below (the play button is in the bottom left corner) and try to figure out how the construction works. If you would like to play the animation again, double click the refresh button in the top right corner. The two natural numbers are 40 and 15 in this case. The least common multiple of 40 and 15 equals 120, and the greatest common divisor is 5.

Here is the basic idea. Suppose we are given two positive whole numbers

is the length of the path the ball has traversed until it hit the corner, divided by

. If you decompose the billiard table into unit squares (squares of side length one), the least common multiple is equal to the number of unit squares which are crossed by the path.

The least common multiple of

, is the smallest natural number that is a multiple of both

. We can write it as

for some positive whole numbers

and can be written as

Given our two numbers

, none of which is a multiple of the other, start by forming a square with sides of length

. Notice that this can be decomposed into

rectangles with sides of length

is the least common multiple of

in this way. We’ll call the bottom left of these rectangles

and the top right 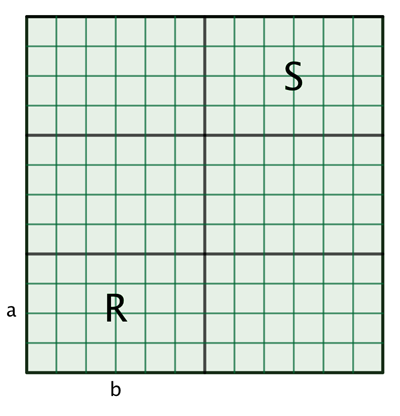 of the square which starts at the bottom left corner and ends in the top right corner. 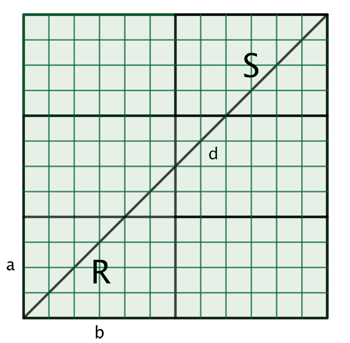 , which lies entirely within the bottom left rectangle

We start with the top right square

, which it shares with a neighbouring rectangle (the rectangle below

in our example). Let’s write 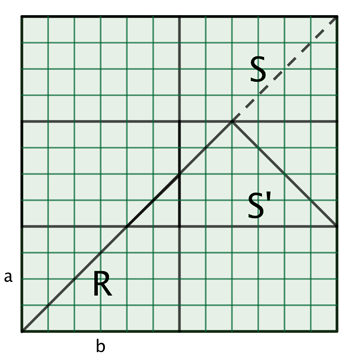 Reflecting the square S in its bottom side reflects part of the diagonal into the rectangle below S.

in the other side that is crossed by

(its left side in our example), not the one that would get us back to 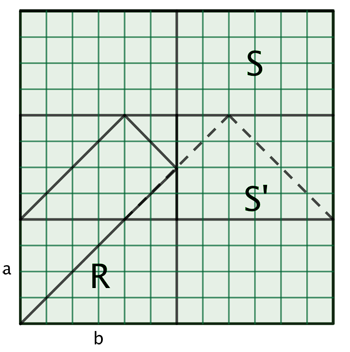 Reflecting S' in its left side.

Keep going like this, reflecting rectangles across sides crossed by

, until you reach the bottom left rectangle

. The repeated reflections transform the diagonal

into the zig-zag path 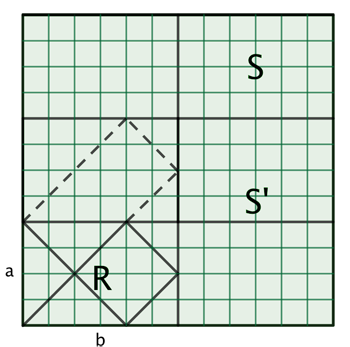 The last reflection results in the path t entirely contained in the rectangle R.

at 45 degree angles to the sides of

. You can verify this using the animation below.

To prove that this is really the case, recall that the ball will make 90 degree turns whenever it hits a side of

. It’s quite easy to see that the path

does the same. This is best explained using a picture: 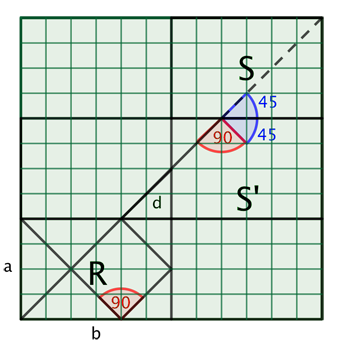 The path t makes 90 degree turns when it meets a side of R.

in sides of rectangles, so the end point of

is a corner of

Now the length of

is equal to the length of the diagonal

. The length of the diagonal of any square is

times its side length (this comes from Pythagoras’ theorem). Therefore

stands for the length of

. Rearranging, we have that

which is exactly what we were trying to prove.

Our method worked perfectly for our example, but can we be sure it works for general values of

(that aren’t multiples of each other)? The only thing that could go wrong is that the diagonal

of the square meets the corner of a rectangle which lies in the interior of the square. If that were the case, we wouldn’t know which of the two sides that meet at the corner to reflect in.

We’ll show that this can’t happen. It’s quite easy to convince yourself that any point 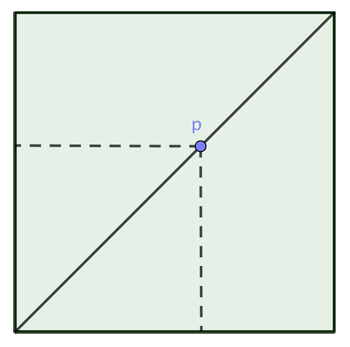 Any point on the diagonal of a square determines a smaller square.

If such a point were also the corner of one of the rectangles, then our small square would be tiled by rectangles with sides of lengths

. But this is impossible: as we noted above, the square with side length

is the smallest square that can be tiled in this way.

is equal to the length of the path

. Let’s move on to the unit squares.

The unit squares crossed by the path

crosses, we equip our rectangle

with a coordinate system. The vertical axis runs along the left vertical side of

and the horizontal axis runs along the bottom side of

. The coordinates of the corners of the unit squares are whole numbers. 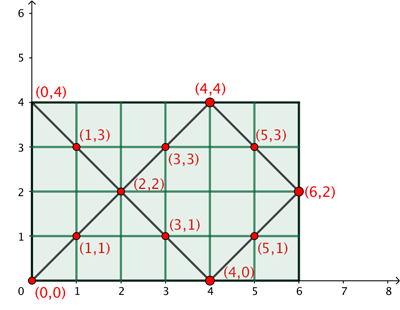 The rectangle R with its coordinate systems. Coordinates of the corners of unit squares that lie on t are shown in red.

It’s clear that if

crosses a unit square, it does so along a diagonal. You can also convince yourself that if the corner of any unit square lies on

can only pass along one of the two diagonals of a unit square.

We leave it up to you to show that

never passes along the diagonal of a unit square twice, neither in the same direction, nor in the opposite direction. You will need to show that the end point of

is different from its starting point. To do this, note that at least one of

must be odd, and that the end point of

comes from repeatedly reflecting the top right corner of the rectangle

We now know that

, the number of squares crossed by

just as we claimed above.

We claimed that the greatest common divisor of

is the distance from the starting point of

to the closest point of self-intersection, divided by

. In this case, the least common multiple of

(see if you can prove this for yourself). By our previous result, the number of unit squares crossed by our path is also

. Since the sides of the rectangle

unit squares in total. And since the path crosses no unit square more than once, it must cross all

unit squares in this case. 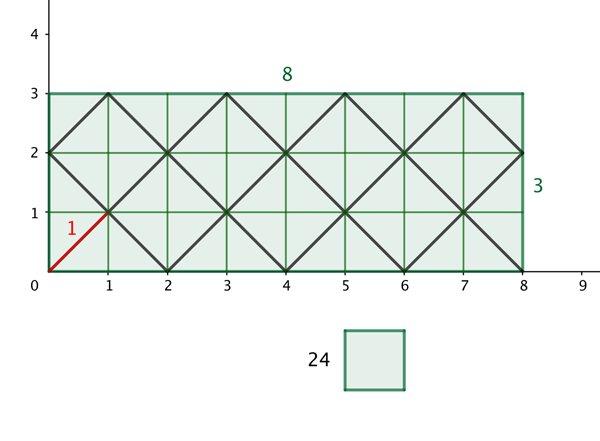 In this example a=3 and b=8. The greatest common divisor is 1 and the least common multiple is 24.

all have coordinates that add to an even number. Conversely, the fact that every unit square is crossed by

This means that the points with coordinates

. This can only happen if

is a self-intersection point of

is therefore a point at which

intersects itself, and it’s the point closest to

, the greatest common divisor of

(by our assumption above). The number of unit squares crossed on the way from

is also equal to

. This proves our original claim for

for the case in which

, then we can rescale the whole figure by a factor

. We can repeat the construction from above for these two integers, and then scale the picture up by multiplying each axis in our coordinate system by

. Unit squares then become squares of side length

. All geometric properties not related to the length (the shape of the path, in which corner the billiard ball lands, etc...) are unaffected by the rescaling. 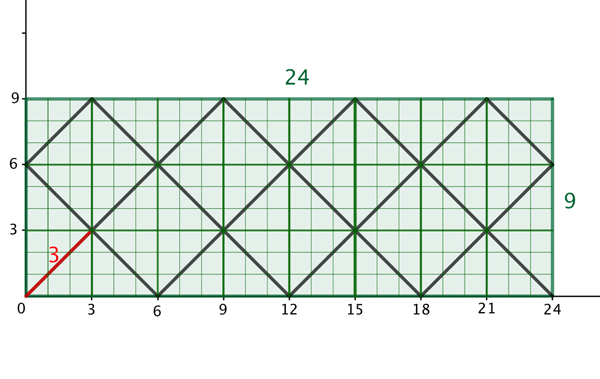 In this example a=9 and b=24. The greatest common divisor is 3. Dividing through by 3, we get 3 and 8, the numbers used in the example above. Scaling up the picture from the previous example by a factor of 3 then gives us this picture. The unit squares from the previous picture turn into larger squares of side length 3, made up of 3x3=9 unit squares each.

from the starting corner and that

is the number of unit squares crossed by the first segment of the path from the starting point to the closest point of self-intersection.

Questions for the reader

If you enjoyed this article, then here are some questions you might want to explore yourself: 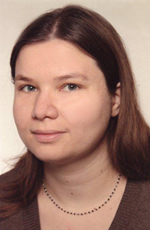 Antonella Perucca is Professor for Mathematics and its Didactics at the University of Luxembourg. She is a researcher in number theory and invents mathematical exhibits (for example the "Chinese Remainder Clock"). To find out more, explore her webpage. She would like to thank Andrew Bruce for help with the article.

Thanks for the article

Thank you for the interesting story about these nice interpretations of gcd and lcm and the pictures! It is also surprising that this algorithm can be used for constructing an optical physical system to find gcd.