José Muñoz works as a biomechanical engineer at Kings College London. He tells Plus how a strong mathematical foundation has given him the flexibility to work in areas ranging from building physical structures to investigating the way genes affect the changing shape of cells in embryos. 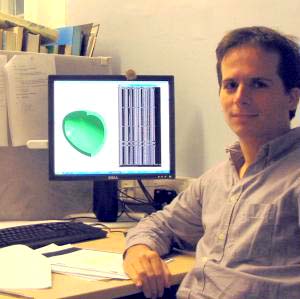 Maths was a part of the general engineering degree that José started in 1990 at university in Barcelona and then Paris, and he appreciates the way keeping his options open in his undergraduate degree has meant he has been able to work in many different areas. "That's the interesting bit about maths and physics: if you have the fundamentals established well you can always move to somewhere else."

José chose to study engineering because he was interested in both the practical and the theoretical sides of the subject: "I wanted to make things possible, to build the objects physically. But I also liked the methods - how you can describe a real physical system with only numbers and functions, and yet still have an accurate image of reality."

José went on to explore the practical side working as a structural engineer for two years in Barcelona from 1995. He enjoyed making real physical structures possible, but realised that he was more strongly drawn to the theoretical rather than the experimental. "The real world is very uncertain," he says, and he prefers the perfection of theoretical models.

For the next two years he worked in Madrid on research into transport phenomena in concrete (the way the environment affects the material). Realising how much he enjoyed research, he decided to go on to a PhD, where he would be learning about one topic in depth and trying to develop it further. "That's the nice thing about a PhD, you're exploring the emptiness."

José's PhD was at the Department of Aeronautics, Imperial College, London, studying computational mechanics, from 2001 to 2004. He worked on computer models of the way elastic bodies behave when they come into contact - for example, cars colliding or satellites flexing as they move. He described these physical systems in mathematical models created on computers, so part of the challenge was to transpose the real world into something the computer can understand. 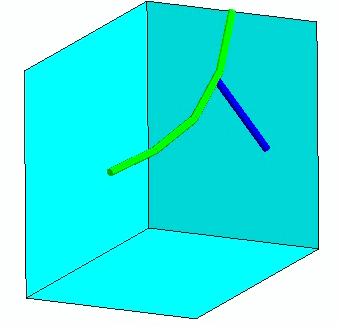 One of the physical systems José modelled in his PhD.
You can watch a movie of this system.

In real life a rubber body is thought of as one continuous object, but to describe it in a computer it has to be discretised - cut into pieces - with each piece described in a very simple way. The body is then modelled as all these small pieces put together. "It's just cutting up all the continuous matter in the physical world, and putting them into the computer as small pieces in time and space interacting according to the laws of physics."

The computer model then consists of this representation of the rubber bodies, and the mathematical expressions for the physical laws that would govern how the bodies would behave and interact. "The physical laws are basically differential equations, saying how things change in time and space."

But the laws of physics apply to the real world, and sometimes cutting things up - discretising them - can mean that some physical properties are lost. José was working on algorithms for putting things into the model while ensuring that as many as possible of the physical laws, such as conservation of momentum and energy, were preserved in the model.

...to modelling how bodies are made

José is now applying the ideas he developed in his PhD to a very different area, working with biologists at King's College, London, together with Mark Miodownik and the Ludwig Institute, on the mechanical effects of genes on the shape of cells in fly embryos. Up till now he has been studying passive bodies that only react to external forces but "with biology the material itself is active - it's changing according to the genetic information".

At the very early stages all embryos have many features in common, but they develop very differently according to their genetic information. An early embryo might become a fly, or a human body, or another animal, depending on different genetic information. "We are working on how this information makes one shape or another," says José. Biologists know the final effect on an embryo of modifying certain genes, but the local mechanisms of the way this happens are still not understood. He is trying to understand the way cells change shape - contract, stretch, become conical, and so on - to create the features of the developing embryo. "Genes act on the structure of the cell. It is made of rods that pull and push; this action of pulling and pushing changes the shape." For example a cell might buckle and create a feature such as the backbone of the embryo. 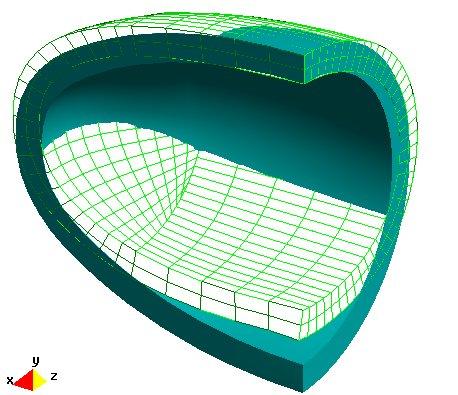 Early stages of the deformation in development of an embryo (model by José Muñoz).
You can watch a movie of this model.

So, although it is a very different application, he still uses the methods he developed for modelling rubber bodies colliding and flexing in his PhD - "the same maths is useful in life systems". But this area of study is fairly uncharted territory. "The laws for passive materials are well known, but the fundamental laws for active material still have to be written. We are trying to understand the link between genetic information and shape. It would be great to have a classification of mechanisms for each gene, and write them as differential equations, but these don't exist yet."

The thousands of genes involved make the mechanisms very complex - which is why maths is so useful. "Maths is a good tool to use for such complex systems - to treat them by hand would be impossible." So José has found that maths is now becoming a sought after skill in biology departments. "When I meet biologists they are looking for mathematicians, people who are able to do the modelling. They spend ages in the lab and find very interesting processes but they don't have a model, or the laws that might cause them. That is why there is lots of interest in models." 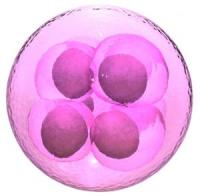 What will it become?

But as José tries to develop mathematical models, he always has an eye on the real world. "If I did a model of a cell and it didn't look as you'd expect from the real phenomena, it wouldn't be valid. Our reference will always be the physical world, and we must not forget that." He was originally attracted to this area by the models themselves, but says it is always more rewarding and satisfactory to know that the work might have real-world applications.

To work in this field, José says you need to be curious and fascinated by it, and to have an open mind, as you may end up working on problems from many areas - as he has. And there are many different ways to end up modelling biological systems. "In this field you find mathematicians, physicists, engineers, biologists, and in the end we all work together."

His advice: "Whatever you do, don't skip the maths. Very often you might have this black box and might not feel it is worth looking into. But some time you might do some research and have to open the black box and modify it so that it does what you want it to do." And it is surprising when some of the things you learn will come in handy: "Even now I have to review subjects I did in maths in my first year as an undergraduate - nothing is really useless."

As José's varied career shows, it is never too late to change your mind about which area you want to work in. "I thought at the beginning I would be an industrial engineer, which makes extensive use of mathematical models. But if you can master the physics and the maths, you can always create or improve the models yourself." And José's ability to create mathematical models has allowed him to work in many areas, from structural engineering to biology. "That is the good thing about maths - it is used everywhere!"

Rachel Thomas is news editor of Plus. She interviewed José Muñoz in London.