If you're interested in maths then Marcus du Sautoy does not really need an introduction: he is Simonyi Professor for the Public Understanding of Science and a Professor of Mathematics at the University of Oxford and well known for his TV and radio appearances and popular maths books. And he's also written for Plus in the past. In this interview he chats about his work as a mathematician and maths populariser. The interview first appeared in Science in School, the European journal for science teachers, and is reprinted here by permission. 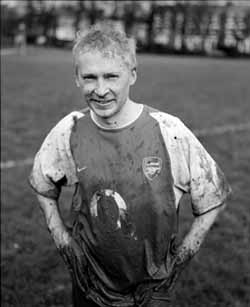 And he certainly does get out there – I feel honoured that Marcus found time for this interview. While we're on the phone he's being driven from the BBC World Service offices in London, where he's been discussing CERN's Large Hadron Collider, to a planning meeting for the Wiltshire Music Festival. And yesterday he was at a circus school, filming a programme about artificial intelligence and how the human brain learns new skills. Hence the sore feet.

Marcus clearly relishes being the professor of the public understanding of science at Oxford University, UK. "It's a hugely varied job – making television programmes, doing radio interviews, giving lectures – and that's what I find so exciting about it. Another thing I enjoy is working with a team, because mathematics can be quite a lonely pursuit: you spend a lot of it on your own at your desk in your own little mathematical world."

Isn't a mathematician an odd choice for the job, though? After all, maths isn't always even considered a science. "There are definitely differences between maths and the other sciences," agrees Marcus. "In mathematics, you can prove things with 100 % certainty. The ancient Greeks proved that there are infinitely many prime numbers, and that's as true today as it was 2000 years ago. Personally, I've discovered new symmetrical objects that I know won't be overturned by future discoveries. So mathematics can give you a little bit of immortality."

"However, the other sciences often rely on mathematics to articulate their discoveries and predictions. As we speak, everyone's getting excited about the announcement of potential evidence for the Higgs boson at CERN, but the Higgs boson couldn't have been predicted without mathematics. Maths is the language of science, so in some ways having a mathematician as the professor for the public understanding for science is the best of all possible worlds." He then adds, "but I would say that, wouldn't I?"

His predecessor in the post, Richard Dawkins, edited The Oxford Book of Modern Science Writing, selecting pieces by scientists Stephen Jay Gould, JBS Haldane, Rachel Carson, Stephen Hawking and Primo Levi. If Marcus were to make a similar collection, whom would he include?

Maths can explain the patterns in animal coats.

"Obviously, I would probably include more mathematicians than Richard did. Bernhard Riemann, for example, who really changed the way we look at geometry. It's thanks to him that we can talk about relativity – without Riemann's world, we wouldn't have Einstein (see the Plus article Hidden dimensions for more on this). I would love to take several scientific topics and show that at their hearts are great pieces of mathematics. For example, Alan Turing, who is famous for cracking German codes at Bletchley Park during the Second World War, also made extraordinary contributions to the theory of artificial intelligence, to computing, and even to biology. The equations that he was studying towards the end of his life explain why animals have certain patterns; it's mathematics that controls why a leopard has spots and a tiger has stripes." (you can find out more on Turing's work in these Plus articles).

Marcus believes that maths even affects how we perceive the world. "Most people think that maths is about long division to lots of decimal places. Really, though, a mathematician is someone who looks at structure and pattern – and in a sense that's how everyone reads the world: we're all mathematicians at heart. Part of my mission is to reveal to people that if, for example, they love listening to music, they are probably listening to it in a very mathematical way, spotting patterns and structures, bits that are similar but changed – perhaps in a symmetrical way, having been turned upside down."

In his book about symmetry, Finding moonshine, Marcus includes a chapter about the Alhambra in Spain. "The palace is full of symmetry, for example in the tiles on the walls; most people appreciate the Alhambra but haven't got the language to articulate what makes it so special. Lots of people have told me, 'I've always loved the Alhambra, but after I read your chapter I saw it in a completely different way'." 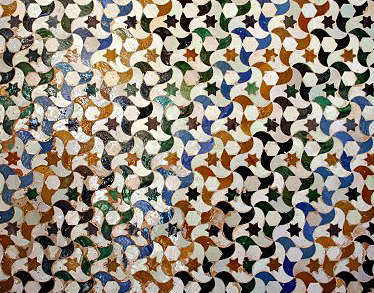 Lots of symmetry: a tessilation in the Alhambra, Spain.

The hero of Finding moonshine is the 19th century mathematician Évariste Galois. "He died in a duel at the age of 20, perhaps over a lover," says Marcus, "but he'd already discovered so many extraordinary things, including a way of looking at symmetry very algebraically and linguistically. I'd love to go back in time and warn him not to fight that morning, and then spend that time with him discussing how he came to create the language we use to understand symmetry – a language that I use every day as a practicing scientist."

Unsurprisingly, perhaps, symmetry is the focus of Marcus du Sautoy's research. "Basically, I'm trying to understand what symmetrical objects exist in mathematics and in nature – not just in three dimensions but in higher dimensions as well. Symmetry is incredibly important across all of the sciences. Crystal structures, for example, are all to do with symmetry; the reason that diamond is so strong is because of its underlying symmetry – the way that the carbon atoms are bound together. Symmetry is very important in biology too – viruses are very often symmetrical in shape and that's key to why they're virulent and so strong. In physics, understanding the fundamental particles depends on symmetry."

Symmetry is important in modern technology, too. "For example, your mobile phone changes your voice into a series of 0s and 1s which then get beamed around the world. Often, there's a lot of corruption on the line, which changes some 0s to 1s and some 1s to 0s. Using symmetry, we encode your voice before it is sent. Any corruption destroys that symmetry, but by using symmetry at the other end, you can often recover what the original message was.'

This is all very different from the maths I learned at school. Marcus explains: "It's because the maths taught at school is like the grammar and vocabulary of the language, rather than the stories or the great literature. Children leave school not realising that there are fantastic stories about prime numbers, about topology, geometry, and symmetry – they just know about sines and cosines and percentages. In English lessons, my son is reading Othello and Animal farm. He doesn't understand the full complexity of these great works, but in language lessons we're not frightened of exposing our students to difficult things – in mathematics, I sometimes think we're a bit timid."

Marcus continues: "I don't blame teachers for the state of our science and maths education, because they are very constrained by the curriculum. But I think any opportunity to give the story behind the maths, to put things in context, can really help to motivate a student. For example, the volume of a pyramid: you can teach the formula as a third of the height times the area of the base – and that's quite boring. Or you can put it in context, explaining that it was discovered in ancient Egypt and showing them a copy of the Rhind Papyrus, which includes the formula. Why were the Egyptian interested? They wanted to know what volume of the stones they needed for their pyramids. Behind the formula is a beautiful story." 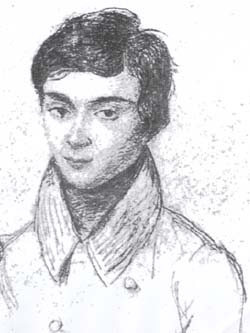 There's also a touching story behind how Marcus became interested in maths. "When I was 13 I went to the Royal Institution Christmas lecture series, when they were given by Christopher Zeeman. I was thrilled to see one of the best mathematicians in the world trying to communicate to kids the excitement of maths. I thought 'I'd love to be him when I grow up'. When I got the chance to give the Christmas lectures in 2006, it was a wonderful way to pay back that inspiration. In the last of the lectures, I told the audience 'I was sitting in your place in 1978, and it was watching these lectures that inspired me to become a mathematician. I hope that one day, one of you will stand up here saying the same thing'. It was an extraordinarily emotional moment – some of the production team got quite tearful too."

Inspiring school students is important to Marcus, but he receives many more invitations than he has time to accept. His public communication work also limits the amount of university teaching he can do – disappointing for those students who chose Oxford for his sake. In an attempt to do justice to both groups, he trained a team of enthusiastic students to give some of his public presentations. "It's a win-win situation," he enthuses. "I get the material into schools, and the students get to do some outreach, go to science festivals – some of them have even worked with me on television projects."

In his continuing quest to bring maths to life for young people, Marcus and a friend also dreamed up an ambitious project: to take the entire maths curriculum and turn it into online games. "It was an interesting challenge," he laughs. "How do you turn quadratic equations into a game? We're really pleased with the result, though. Kids love playing these games, which the teachers say actually deliver the curriculum. They can set particular games as homework and know that the children can't score the necessary points without having understood the maths."

Research, university teaching, public lectures, broadcasting, popular science writing…. With such a multitude of activities, it can't be an easy question, but when he looks back in 30 years, what would Marcus du Sautoy like to feel he has achieved? "When someone tells me that one of my lectures inspired them to study maths, it's a great feeling. But it's my mathematical work that I'm most proud of – forging into the unknown and discovering something new and useful. And there are still a few more conjectures I'd like to prove, to look back on and think 'wow, I contributed to that extraordinary edifice we call mathematics'."

Dr Eleanor Hayes is the editor-in-chief of Science in School. She studied zoology at the University of Oxford and completed a PhD in insect ecology. She then spent some time working in university administration before moving to Germany and into science publishing in 2001. In 2005, she moved to the European Molecular Biology Laboratory to launch Science in School. Interpreting "science" broadly, Science in School covers not only biology, physics and chemistry, but also earth sciences, engineering and medicine. It features news about the latest scientific discoveries, teaching materials and many other useful resources for science teachers. The journal is freely available online, with articles translated into many European languages. The print version (in English) is free within Europe.