This article is the winner in the general public category of the Plus new writers award 2009. 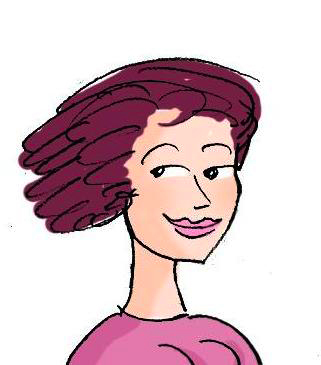 Carol is intelligent and beautiful: the perfect mix. All images by Gianni Peg.

My friend Carol is nice and beautiful. Anyone would bet she has plenty of dates. But it turns out that this is not the case.

The fact is that Carol has dated no-one for ages. And although she is shy by nature, she is also open to adequate proposals and would love to find someone special. But Carol claims that men do not usually approach her. She thinks she frightens them away. Is it just a matter of bad luck? Or is it something else? Maybe Carol has a distorted perception of reality?

Luck is an issue that's naturally addressed in mathematics. If it is a question of luck, mathematics may shed some light on Carol's problem. Let us see.

Consider a man — let's call him Guy — who is attracted to Carol and has the opportunity to talk to her, let's say at a coffee bar. Realising that Carol is shy he considers whether or not to approach her. Guy considers the possible outcomes:

Now Guy realises that he is not the only man in town. He is aware of the fact that the outcomes depend dramatically on the actions of other guys independently considering whether to approach Carol or not. Assume that Guy thinks that he will get (a) only if no one else approaches Carol and (c) when he is not the only one approaching Carol. Of course if he does not talk to Carol, he gets (b). Guy's modesty seems understandable if he does not trust himself as a strong candidate in the face of competition.

The fact that his choices depend so strongly on the choices of others is what makes his an interactive decision problem. The study of how individual behaviour is conditioned by the social environment is the objective of social psychology. The interaction involved here is the trademark of game theory, which was developed in the twentieth century.

The solution of Guy's problem, and that of all of the guys, is a bundle of actions deemed rational within the described framework. The assumption that everyone behaves rationally may seem slightly unrealistic, but it's crucial in the game theoretical approach, since mathematics can't account for someone behaving irrationally or against their own interest. The symmetry of the problem — Guy may be anyone — implies that all will act in the same way, since all will make the same rational considerations. Rationality permits to discard the symmetric solution in which no one talks to Carol: given that none of the others talk to her, Guy gets a better outcome by approaching her, so rationality would imply that Guy does approach her. A similar reasoning permits the discarding of the solution in which everyone talks to Carol. There are no more apparent symmetric solutions. 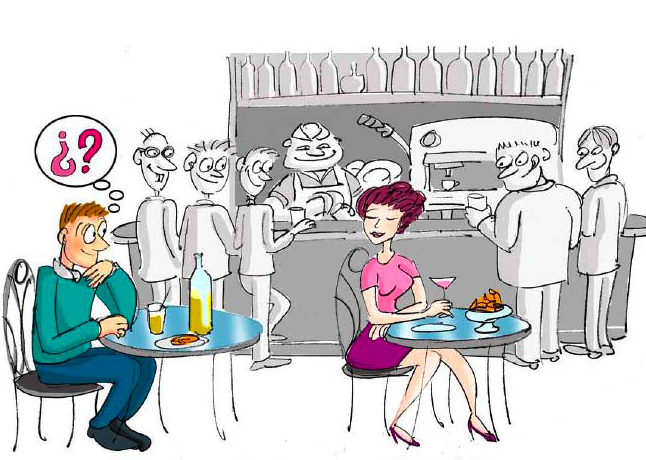 Guy needs to be subtle to proceed. He may think of solving his dilemma by tossing a fair coin. This amounts to Guy being totally uncertain about what to do. If we admit that "being uncertain" is a possible solution to his dilemma, is the 50-50 chance truly rational, or would another level of uncertainty, say 30-70 in favour of approaching Carol, be better? Is there even a rational way to be uncertain? This seems an interesting idea. Let us see where it takes us.

Guy's uncertainty is described by the probability

of approaching Carol (so

is the probability of not approaching her). By symmetry, everyone's uncertainty is represented by the same number

- everyone independently makes his choice according to

. The goal is to find the best value

can be obtained indirectly via the following observation. The bundle of common uncertainties defined by

is rational only if Guy (and any other guy) associates the same level of "reward" with his two possible actions, approaching Carol or not approaching her, given that the rest are all uncertain with probability

. Otherwise there is no uncertainty about what to do: Guy would go for the action with the higher reward.

But how can Guy assign a reward value to a bundle of uncertainties? One possible answer, given by John Von Neumann and Oskar Morgenstern, is to average the reward values assigned to all possible bundles of actions with weights equal to their probability of occurrence. This is called expected valuation. Rationality based on expected valuations has been the major paradigm for decision making analysis since the 1950s.

guys deciding independently, then there are

possible bundles of actions. Guy makes his calculation as follows:

Guy is uncertain about what to do when these two values coincide:

lies between 0 and 1 and therefore defines a proper probability. 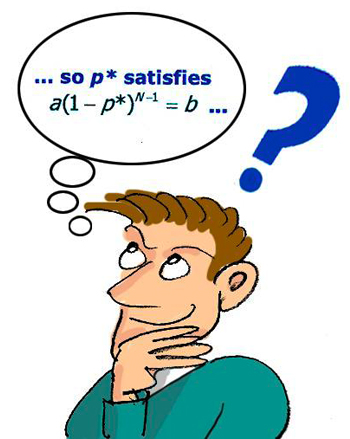 The conclusion is that anyone should approach Carol with probability

not too large it is possible that

and the odds are that Guy will talk to Carol. However, as soon as

the possibility of no one approaching Carol becomes more likely. In fact,

gets large, no matter how stunning Carol may be.

Hence the following (un)veiled mechanism may be inhibiting Guy from approaching Carol: (1) The larger the number of Carol's admirers the more probable it is that Guy will not talk to her; (2) The more attractive Carol is, the more likely it is that there will be lots of guys considering this decision problem. Guy is thus led to believe that

correspondingly small. In consequence he will very likely choose curling up with Plus rather than risking Carol's rejection.

of no one talking to her. Since all the guys act independently,

increases. The entry of new potential dates adds to the probability that Carol is left alone.

does not vanish but tends to

Carol's perception that she scares men away is not a delusion after all. According to the mathematics above, she may be justified in thinking that guys stay away from her. It is not a matter of bad luck but a collateral effect of interactive rationality. A paradoxical consequence is that Carol's attractiveness acts as a repellent. This surprising phenomenon — which we call the Carol syndrome —is a by-product of psychological social interaction. 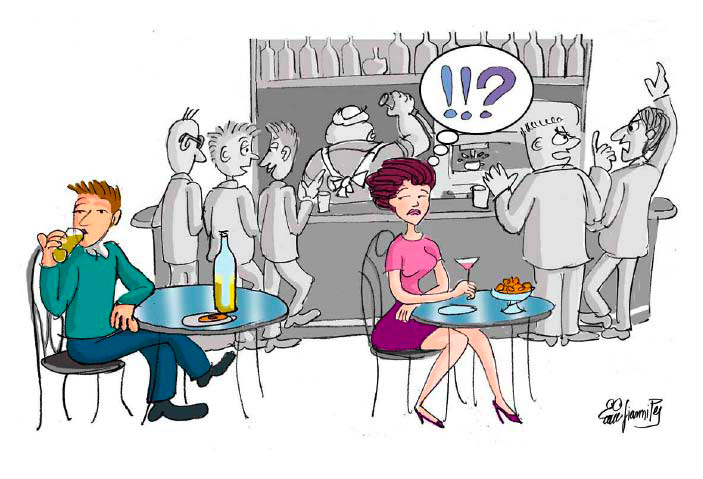 The Carol syndrome in operation.

The Carol syndrome is not a theoretical artifact. As striking as it may appear, the syndrome is often reported by attractive women and men. A web search brings up some notorious cases. In an interview for The Sunday Times in February 2008, American actress Uma Thurman was reported as saying that "men rarely chatted her up." She considered her bad luck with men a life-long curse. The same was true of American star singer Jessica Simpson who declared in a TV show in September 2006: "I scare guys away". Another example, reported in March 2009 by The Telegraph online, is that of 19-year old British actress Emma Watson, who said that her starring character in Harry Potter’s saga, while bringing her worldwide fame, "scared boys away".

Hence Carol's luck is not odd, although it obviously differs from celebrities like Ms Thurman. Mathematics can explain how. The number of Ms Thurman's admirers is huge so that the ceiling value

is a good approximation for

and this somehow eases Thurman’s sufferings. For Carol,

is not as large, but the ratio

– is closer to 1. This is what causes Carol's Carol syndrome. 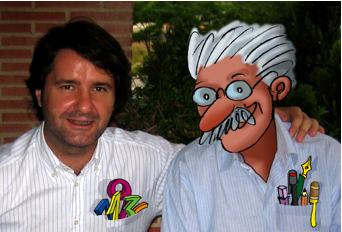 José-Manuel Rey obtained his PhD in mathematics in Madrid. He spent a year as a postdoc at St. Andrews University and University College London. He is now Professor at the Universidad Complutense in Madrid. He thanks his colleague Carmen Carrera for her useful comments on style when preparing this article.

Gianni Peg is a popular Italian artist who has been having fun illustrating storybooks, comics, and cartoons for more than forty years. He is currently based in Rome. When José-Manuel told him about Carol, he did not hesitate to approach her ... pictorially!

So with this analysis in mind

So with this analysis in mind the best thing to do is act irrationally, go up, and talk to the person. Thanks.

You haven't factored in the probability that Carol is already in a relationship, which would bias her receptivity to an approach. The common perception is that more attractive people are more likely to already be committed. If true, this would increase the odds of rejection and further discourage guys from making the attempt. This should be factored into your analysis.

Of course this assumption may not be valid. But that represents a separate research topic.

"The solution of Guy's problem, and that of all of the guys, is a bundle of actions deemed rational within the described framework. The assumption that everyone behaves rationally may seem slightly unrealistic, but it's crucial in the game theoretical approach, since mathematics can't account for someone behaving irrationally or against their own interest. "

Actually, feeling sexual attraction and actions stemming out of this feeling are as far from rational as possible, and certainly obliterates the assumption. Bold, muscular jock, who will come and take her as he will, won't care about a probabilities in the slightest. He won't analyze the options. All that will happen will be "Damn, she's soooooo hot!" in his head, several hormones/neurotransmitters will flood his body, several minutes later, and the poor calculating Joe or Bob thinks: "If only I could do that..."

I think the socially likely event is that one person who DOES NOT CARE about the outcomes, about mathematics and probably about Carol, is most likely to approach her, charm her, confess that he does not care, break her heart and leave her feeling lost and unsure of her own worth.
So, if Carol is really as described and a friend, guys please protect her from such potential heart breakers (even and esplly if she thinks she can handle them).

---If every (wo)man is a universe (or an image of one), two independent straightforward (wo)men holding the same perspective would be parallel universes.---

Makes sense. I'd like to suggest the following modifications / additions -
1.) the reward (c) should be a linearly (or geometrically) decreasing function of N - Guy will not be indifferent to N = 2 and N = 100.
2.) N may not be homogenous, which means that (a) will not be uniform. However, a normal leptokurtic distribution does not seem like an unreasonable assumption for (a)
3.) (b) is essentially the opportunity cost - which is proportional to the perceived number of Carols in the bar. (b) can then be a normal distribution with mean (b)/m, where 'm' is a suitable whole number depending on person to person

What if, to show that she is not shy and that she is outgoing and personable, Carol goes out with her friends? Now Guy needs to impress the entire group if he wants a favorable outcome with Carol.

In the real world, a increases with N. If Carol has more admirers, she is probably more attractive, so the reward value of getting her number increases. So p_none = (b/a)^{N / (N - 1)} may actually decrease as Carol becomes more attractive.

This is why attractive people don't automatically have fewer suitors.