An abstract pattern engraved in a piece of ochre found at Blombos Cave in South Africa. Image: Chris S. Henshilwood.

Abstract art goes back a long way. The earliest examples are around 73,000 old and consist of abstract patterns engraved into pieces of ochre by natives of what is now South Africa. During the last ice age, around 40,000 year ago, European artists also left abstract designs, this time on the walls of caves.

What is striking about these early manifestations of abstract expression is that the patterns drawn were the same across cultures and locations: there are dots, cross-hatchings, circles, wavy lines and, in particular, spirals. These geometric patterns resemble what people report seeing when they are in altered states of consciousness, causing researchers to suggest that much of early abstract art was inspired by drugs.

Apart from scandalising the Daily Mail this idea also poses a question: why would people across continents and ages all favour patterns seen during drug induced hallucinations over the many others they could have chosen to paint? What makes drug induced visions so compelling? A recent paper by computer scientists from Japan suggests that the answer might hinge on an interesting interplay between the mathematics of pattern formation and a mechanism that generates a sense of value and meaning.

The geometric patterns seen in visual hallucinations were first studied scientifically in the 1920s by the German-American psychologist Heinrich Klüver. Klüver experimented with peyote, a cactus whose psychoactive ingredient mescaline played an important role in the shamanistic rituals of many central American tribes. Popping peyote buttons in the lab Klüver noticed the repeating geometric shapes and classified them into four types, which he called form constants: tunnels and funnels, spirals, lattices including honeycombs and triangles, and cobwebs. 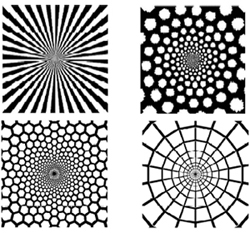 Computer generated representations of Klüver's form constants. The top two images represent a funnel and a spiral as seen after taking LSD, the bottom left image is a honeycomb generated by marijuana, and the bottom right image is a cobweb. Image from What Geometric Visual Hallucinations Tell Us about the Visual Cortex by Paul C. Bressloff.

When it comes to understanding pattern formation in nature scientists often look to the work of Alan Turing, better known as WWII code-breaker and father of modern computer science. To explain the formation of the stripes and spots we see on animal coats Turing considered a system of two chemical agents (loosely speaking, one for each colour in a two-coloured animal coat) which diffuse through a medium (the cells making up an animal embryo) but also interact with each other in a specific way. Writing down the equations describing this process Turing found that once the system is nudged out of equilibrium it polarises. Rather than forming a uniform mixture the agents arrange themselves in a variety of possible patterns (see How the leopard got its spots for more detail).

In the 1970s H.R. Wilson and Jack D. Cowan showed that this reaction-diffusion idea could also be applied to neurons in the brain. Here reaction corresponds to interactions between cells and diffusion to neural activity that spreads along connections between neurons. Cowan and G. Bard Ermentrout used this idea to create the first mathematical model of visual hallucinations. In their model the two agents are groups of neurons located in an area of the visual cortex known as V1. One group contains excitatory neurons — they make other neurons more likely to become active — and the other contains inhibitory neurons, which make other neurons less likely to become active. The model suggests that when this two-agent system is knocked out of equilibrium, for example by the presence of a drug in the brain, patterns of neural activity can form in V1. These then project to geometric patterns in the visual field which are what people see under the influence of the drug, corresponding to some of Klüver's form constants. It's an amazing idea: when people are hallucinating they are literally looking inside themselves, watching their neurons interact. (You can read more about this model in this Plus article.)

Like all models of brain activity Cowan and Ermentrout's model is limited. The brain is too complex a beast to describe in its entirely. But other models too have found that patterns can arise in neuronal dynamics in a similar way, with spirals and waves that emanate from a centre particularly ubiquitous — just like in early abstract art. What is more, once these patterns have emerged they tend to be pretty robust, for example they can remain in place even when the model parameter that represents a drug is changed.

The authors of the new study suggest that this robustness may explain why people experience these visual hallucinations as particularly meaningful and profound. The human brain is often described as a sophisticated computer, taking sensory information as input (a tiger in the bush) and then returning some output (run!). Things like value and meaning are taken to be hard-wired "illusions": we find meaning in the company of others because cooperation is a good survival strategy.

According to Turing's model the pattern on a jaguar's coat is a result of a reaction-diffusion process. A similar process may be the origin of geometric hallucinations.

By contrast Tom Froese, Alexander Woodward and Takashi Ikegami, all of the University of Tokyo, point to the enactive approach to psychology which holds that value and meaning aren't always pre-determined. They can be generated dynamically by the processes that take place within our brain based on information it receives about an event, thing or situation. Value and meaning are emergent phenomena. If this smacks of magic, think of a gas as a very basic example. Its individual atoms know nothing about temperature or pressure — these features emerge as a result of the interaction of many atoms. Similarly, value or meaning aren't inherent in an object, say a tiger in the bush, or in any of the components that make up our brain, but they arise through dynamic interaction. At the most basic level the value of something is defined by the extent to which it supports the ongoing activity of our brain.

But why should it require the whole brain to generate value in this dynamic way? Neurons, or groups of neurons, can become so entangled with each other that they form self-sustaining networks of processes which can keep going as long as conditions are just right — they generate a neurocognitive identity. Froese, Woodward and Ikegami suggest, in line with the enactive approach, that these can also generate value based on whether a situation is beneficial for their ongoing activity. Mathematical models of geometric hallucinations, like the one described above, also involve such self-sustaining collections of neurons. These are relatively robust since in the altered state of mind other influences don't hold much sway over the visual region of the brain. Thus, a lot of value is generated: the person experiences the hallucination as intensely significant. This, the researchers suggest, may be why patterns seen during such hallucinations are so prevalent in early abstract art. They appear much more meaningful than other patterns people may have come across in daily life.

More generally the researchers speculate that Turing-like mechanisms in the brain could have helped our early ancestors to develop imagination. Because of their robustness Turing patterns that develop in the visual region V1, perhaps because of the influence of a drug, could potentially shut out all external visual stimuli. The resulting state of extreme introversion may have enabled our ancestors to take the leap from the here and now into the abstract and imagined.

The study Turing instabilities in biology, culture, and consciousness? On the enactive origins of symbolic material culture has been published in the journal Adaptive behaviour.