In October the home of Plus, The Centre for Mathematical Sciences in Cambridge, joined Black History Month celebrations with an event showcasing the contributions of black mathematicians. It featured a keynote talk by Nira Chamberlain, President Elect of the Institute of Mathematics and its Applications, and talks and a panel discussion by current and former staff and students od the Mathematics Faculty at the University of Cambridge. 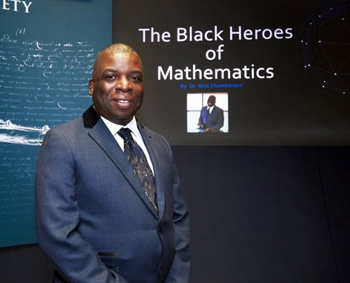 "For Black people, there have always been historical as well as modern obstacles to prevent them from becoming mathematicians: overt racism, prejudice and stereotypical threats," says Chamberlain. "However, there have been those that have trail-blazed within this field. The problem is that their names remain hidden."

Providing role models, revealing those hidden names, is an important step in encouraging those that find themselves in a minority, and this was one of the main aims of last month's event. Chamberlain's keynote talk, as well as posters produced for the event, revealed the names of some successful black mathematicians past and present.

As far as Cambridge is concerned, the very first example goes all the way back to the eighteenth century and right to heart of matters of racism: Jamaican-born Francis William was brought to England by the Duke of Montagu as part of a social experiment designed to prove that black people can match the intellectual achievements of whites. William was awarded degrees in mathematics, Latin and literature by the University, but is today known mostly for his work as a poet.

"You don't need anyone's permission to be a great mathematician." Nira Chamberlain

But of course it was the speakers themselves who represented the most immediate role models at the event. Chamberlain, who was told at school he'd be better off becoming a boxer, is now on the Science Council list of the UK's top 100 scientists. Spencer Becker-Kahn who obtained his undergraduate degree and PhD at Cambridge and is now a Lecturer at the Department of Pure Mathematics and Mathematical Statistics, talked about his work on pure mathematics. Ronald Reid-Edwards, Lecturer at the Department of Applied Mathematics and Mathematical Physics and Korner Fellow at Trinity Hall, gave a brief introduction to string theory. And Khyla Kadeena-Miller, who did her undergraduate and Masters degrees at Cambridge and now works as a data scientist at the pharmaceutical company AstraZeneca, talked about some of the unexpected joys of studying mathematics.

"I really enjoyed the event, especially that Nira highlighted other black mathematicians that came before," says Kadeena-Miller. "During my undergraduate degree there weren't any lecture courses with black lecturers on offer, so it was easy to wonder just how many there were out there. This event signals that Cambridge is open to black people — it is a wonderful place to learn, and this will bolster that message." 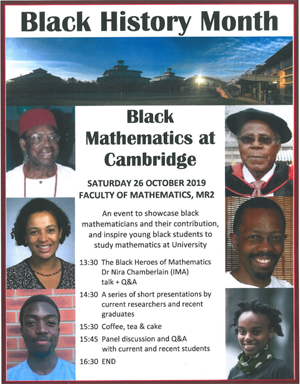 While these examples were enthusiastically received by the audience, the event also had another important outcome: it inspired those that attended to start creating a network of black, Asian and minority ethnic mathematicians. This isn't only important as a way for its members to provide and receive support, but also as a conduit for information.

"One of the things that came up in the panel discussion is the [Faculty's] drive to attract more female staff, which has borne fruit," says Orsola Rath Spivack, Cambridge mathematician and Admissions Officer, who organised the event. "The question then was why the Faculty didn't do the same for ethnic minorities."

"Well, it's not that easy. There are lots of women in mathematics and women in STEM networks, to which you can send job adverts, so that people are encouraged to apply. But we haven't been able to locate similar networks that would encourage more ethnic minorities to apply. It's great that we started this discussion and hopefully we will find ways of [creating such networks]. It has worked for women and I hope it will work for ethnic minority mathematicians as well."

The event not only attracted University students and staff, but also students from schools, and this is something Rath Spivack would like to focus on in future activities. In July 2020 she is planning to run a residential course for sixth-formers (details to be advertised shortly). To maximise reach, she wants to live-stream future events and make the posters produced publicly available.

The effort to reach schools is important, not only to inspire their students, but also to help dispel stereotypes about high-ranking universities: as the panel discussion showed, not all teachers feel comfortable advising their students to apply to Cambridge or Oxford, even if their ability warrants it. "I don't think this is restricted just to ethnic minorities," says Rath Spivack. "I find that some teachers need to be made aware that people from any background should apply to Cambridge; that Cambridge is not the posh place that people expect."

"Cambridge mathematics is very diverse with people from [all sorts of different backgrounds]. The environment is far more comfortable from what people might expect. What is nice is that, although some of [the audience and panel] said they felt they were in a minority at Cambridge, none of them felt they experienced any form of discrimination or disadvantage because of this — it just didn't come into it."

Overall, Rath Spivack feels that the inaugural event has provided a good start to an on-going project: links have been forged, problems identified, and some of those hidden names of non-white mathematicians have been brought to the fore. "These things usually take time, but I think [the project] will bear fruit," she says. "If not immediately, then in a few years. It is bound to."

Surely the best known is https://en.wikipedia.org/wiki/Srinivasa_Ramanujan