As your cereal tumbled into your bowl this morning, were you daydreaming of sand dunes or snowy mountains? It wouldn't be surprising given the drab grey skies outside. But now you have another excuse: the cereal, sand and snow can all be examples of granular flows. These occur when a large number of particles move together, say snow avalanching down a mountain, the shifting of sand dunes in the desert or some industrial process in which materials tumble down chutes. 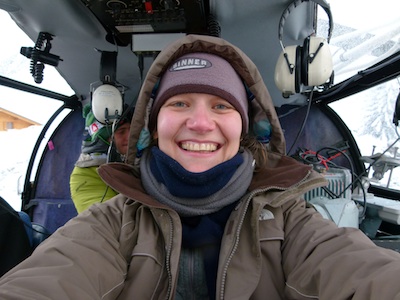 Vriend on her way to the bunker at the test site in Switzerland. It is safer to travel by helicopter as there is a danger of spontaneous avalanches. (Photo courtesy of Nathalie Vriend)

Nathalie Vriend is about to embark on one such breakfast daydream: she is travelling to gather data from some of the biggest granular flows around, avalanches in the Swiss Alps. She aims to understand exactly how those granular flows behave in order to build better mathematical models that will not only improve skiers' safety, but also lead to more reliable industrial processes and, perhaps, even a better mix of muesli.

Normally Vriend works in an underground laboratory under the grassy courtyard at the Centre for Mathematical Sciences in Cambridge (just next door to Plus). Granular flows are particularly difficult to model mathematically as they behave like solids, liquids and gases all at the same time: for example, snow can form solid boulders that tumble down at the front of an avalanche but also powder clouds rising above it. Granular flows are at the interface of different areas of physics – Newtonian physics, statistical mechanics and fluid dynamics – and any model of how a granular flow behaves has to take into account what is happening at many different scales.

We got a chance to look around Vriend's lab at the variety of fascinating experiments they use to observe this complicated phenomenon. She is particularly interested in how granular flows are affected by the size of the particles involved. The grains in the real-life flows can vary in size, from microscopic dust particles to huge boulders of stone or rock. To rule out any impact of the shape and density of the particles, Vriend and her colleagues have simplified their experiments to flows of small balls made of identical material that come in two sizes – larger red balls and smaller white balls.

When large numbers of these red and white balls tumble down a slope together, they tend to segregate by their size. One observation is that the larger balls tend to rise to the top of the flow – something known as the kinetic sieving, or more commonly as the Brazil nut effect. You might have observed this yourself when you've shaken your box of muesli – the larger nuts and fruit will rise to the top of the muesli box. The smaller particles are able to fall through the small gaps, Vriend explains, gradually making their way downwards. The larger particles can't do this, and so seem to rise to the surface. Counterintuitively, shaking doesn't induce mixing. Instead it segregates the particles into regions of similar sizes, which can be a real problem in industrial processes when a consistent proportion of ingredients is needed. 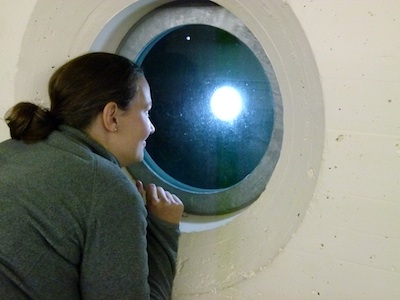 Llooking through a small hole in the bunker at the test site in Switzerland: how big is the avalanche caused by explosives?

An avalanche is a mix of tiny particles of powdery snow and larger chunks of compacted snow. As these flow down the mountain the larger blocks rise to the surface and move to the front and sides of the flow. Vriend's experiments mimic this. They release a cascade of thousands of larger red and smaller white balls down a 3 metre long slope, and use high speed cameras to track the progress of the individual particles and also the overall shape and makeup of the flow.

Currently the mathematical models of such granular flows have concentrated on what is happening on the surface, primarily because it is easier to observe. But Vriend wants to know what is happening inside: does the flow behave differently there than it does on the surface? In a smaller experiment she releases a mix of the red and white balls down a slope between two clear perspex walls. They meet a closed gate at the bottom of the slope, creating a shock wave that travels back through the flow. When the flow settles, a pattern in the red and white particles is visible through the clear wall. The larger red particles, initially introduced at the bottom of the flow, rise to the top due to segregation, while the smaller white particles, initially dropped on the top of the flow, sink quickly to the bottom. Using a MRI scanner to reveal what is happening inside the deposit, Vriend discovered that the internal structure looks qualitatively the same (large on top, small on bottom), but quantitatively very different in proportion and structure. This shows the large influence of side walls and the limitations of imaging the flow through side walls. It just goes to show, don't judge a deposit by its surface! 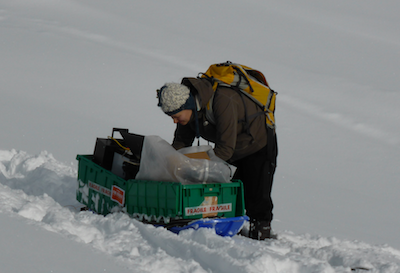 Vriend is now taking her interest in the interior of granular flows on an exciting field trip. She is using ground penetrating radar to see below the surface, to detect the different structure and shapes of the layers of snow. Vriend calibrated her radar in the Austrian Alps in February, and is waiting to travel to a large avalanche test site at Vallee de la Sionne in Switzerland to really put the radar to the test. There they release full scale avalanches which are observed by researchers from the safety of snow bunkers. But unlike the other researchers who will be taking dynamic measurements of the avalanche in motion, Vriend will instead walk over the resulting snow fields with her radar, to try to reconstruct the flow from the resulting deposits. She hopes this will increase the accuracy of existing avalanche models and also allow for better analysis of the aftermath of avalanches, after they have already happened.

We're looking forward to postcards from Vriend updating us on how the research is going. And in the meantime, you can read more about avalanches and granular flows in our article Going with the flow and our career interview with Vriend's colleague, Jim McElwaine, an avalanche researcher.