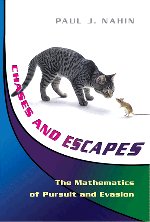 Chases and Escapes: The mathematics of pursuit and evasion

I've read several of Paul Nahin's books before (see my review of Dr. Euler's fabulous formula in Plus) and this is no exception to his excellent style.

The strategies of pursuit and evasion have fascinated mathematicians for centuries. One of the earliest problems was posed by Frenchman Pierre Bouger in 1732. Imagine a pirate ship positioned at the origin (0,0) of a co-ordinate system, giving chase to a slower merchant ship initially positioned a short distance along the x-axis and sailing due north to escape. If the pirate always steers to be sailing directly towards the merchant, this is known as a pure pursuit strategy, and the equation of the resultant curve can be calculated. See my Plus article They never saw it coming for a description of pure pursuits and a special class of strategies that allow the chaser to remain motion camouflaged.

This pure pursuit is seen widely in nature (as birds of prey swoop in on their target, for example), and has also been of enormous importance in military history, with submarines launching torpedoes at surface shipping and air-to-air missiles fired at enemy fighter planes. The problem obviously becomes more difficult when the target does not follow a straight-line course, and Nahin explains how even the simplest non-linear escape paths (such as a duck swimming around the outside of a circular pond) become impossible to solve without simulating them numerically on a computer.

Nahin also describes how the physics of the real world often intervene on mathematically pure solutions, explaining why heat-seeking missiles cannot actually use a pure pursuit in the terminal phase of their flight because it would require impossibly high accelerations to keep the missile turning towards the target. Intercept missiles, such as the Sidewinders made famous in the dog-fighting scenes of Top Gun, therefore run a strategy of proportional navigation — a solution that predates modern missiles by centuries!

Other scenarios dealt with in the book are as much tricks of lateral thinking as problems in analytical mathematics. For example, try this one involving an invisible evader. A coast-guard ship is patrolling the open sea, and spots a smuggler just as thick fog descends and reduces visibility to zero. The coast-guard has a faster ship than the smuggler (and both move at constant speed), but knows that he has been seen and the smuggler will have immediately set off in a random direction to try to slip away through the fog. The coast-guard is some distance from the smuggler when the fog descends, and doesn't even know what direction the smuggler tries to escape in, but he can still steer a course to ensure that he catches the smuggler. What is it? The solution that Nahin presents is satisfyingly graceful.

The book does contain a healthy serving of equations and proofs, employing first year undergraduate calculus, but even if you don't follow every step of the derivations (as I certainly didn't!) there is still a great deal of interest, and lots of diagrams and pictures to help.

Lewis Dartnell is a biologist now finishing his PhD at University College London's CoMPLEX (Centre for Mathematics & Physics in the Life Sciences and Experimental Biology). He is researching in the field of astrobiology — using computer models of the radiation levels on Mars to predict where life could possibly be surviving near the surface.

He has won four national writing prizes, and his popular science book, Life in the Universe: A Beginner's Guide, was reviewed in the last issue of Plus.