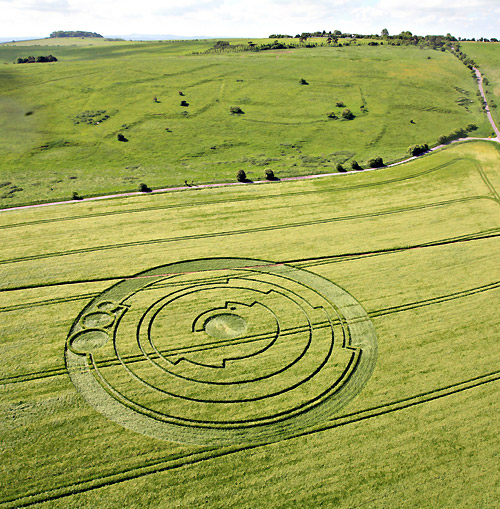 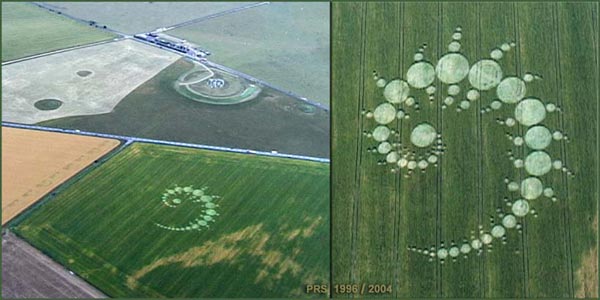 Read more about...
alien life
mathematics in the media

'Why are supposed aliens using the decimal system?' is a fair question.
It should firstly be pointed out that the idea there are only two possible explanations for the appearance of crop circles, aliens or people with planks, is a strangely limited but persistent choice, and quite extreme ends of a spectrum.
But anyway, within that framework, the question is referencing the concept that humans use Base 10 as a standard due to the fact that we have 10 fingers, making decimal an arbitrary base other than through a biological starting point.
But is that the only substantial explanation for favouring base 10 ?
Base 10 is found in a decagon. In geometry construction, to divide a circle into ten equal segments and draw a decagon the length of the chord, or straight line between each poin on the circumference, is the radius length multiplied by 0.6181.. or Phi, the Golden Ratio.
These are two universal constants, and with the sine function they produce base 10.
And that gives rise to the possibility that it's not so much that we use Base 10 because we have ten fingers, but rather we have ten fingers because base 10 is inherent in Pi by Phi when we use the sine function.
This of course gives no explanation about the origins of crop circles, but it does give a reason for why supposed aliens would note base 10

My understanding in the last four thousand years since we've had pi it had never been shown two-dimensionally.

3 Circles at the Top of this Crop Circle

It appears to me that the three circles at the top of this crop circle are from right to left: Mercury (Diameter 4,878 KM), Venus (Diameter 12,104 KM) & Earth (Diameter 12,756 KM). The amount of examples of the number 3 in nature and in the bible are astonishing.