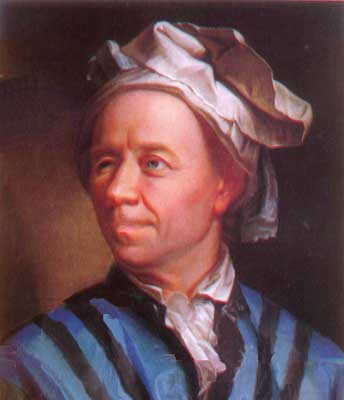 Here is one of the trickiest unanswered questions in mathematics:

Can every even whole number greater than 2 be written as the sum of two primes?

A prime is a whole number which is only divisible by 1 and itself. Let's try with a few examples:

If you keep on trying you will find that it seems that every even number greater than 2 can indeed be written as the sum of two primes. This is also the conclusion that the Prussian amateur mathematician and historian Christian Goldbach arrived at in 1742. He wrote about his idea to the famous mathematician Leonhard Euler, who at first treated the letter with some disdain, regarding the result as trivial. That wasn't very wise of Euler: the Goldbach conjecture, as it's become known, remains unproven to this day.

There is a similar question, however, that has been proven. The weak Goldbach conjecture says that every odd whole number greater than 5 can be written as the sum of three primes. Again we can see that this is true for the first few odd numbers greater than 5:

The weak and strong Goldbach conjectures are just two of many questions from number theory that are easy to state but very hard to solve. See here to read about some more, and here to find out more about the Goldbach conjecture and our Goldbach calculator.

wonderful it gets the deeper you dig

After receiving a B.S in Mathematics, i realized that i could just barely start to see the beauty in this marvelous subject...
Surprising it is that how simple conjectures can resist a solid proof for centuries...

The conjecture is actually worded a bit differently.

Every even number greater than 2 can be written as the sum of two prime numbers.

The initial wording of the conjecture included 2 as a number that could be written as a sum of two prime numbers but that was also assuming 1 was a prime number.

This calculator does a great job, but does not list situations when the two prime numbers are the same (for example, 6 can only be expressed as 3+3, which does not calculate in the applet).

The article explains this clearly - read the part in parenthesis.

The Goldbach pairs (Goldbach partitions), when considered multiplicatively rather than additively, can be used to generate what are known as odd semiprimes - the products of two odd prime factors (unique or identical). When you realize that fact, then you may make the conjecture that every perfect square integer can be expressed as the sum of an odd semiprime and another perfect square. We know that odd times odd will always generate odd, and we also know that the sequence of odds sum progressively to the sequence of perfect squares. We also know that the integers 0 and 1, the so-called identity elements, are also perfect squares. We also know that another way of stating the strong Goldbach conjecture is to say that every integer n is the average of two odd primes - hence, the Goldbach relates to midpoint. So we have the introduction of perfect squares and midpoint into the Goldbach conjecture which leads to a conclusion that the Goldbach conjecture has much deeper roots than the simple statement first suggested by Christian Goldbach. The conjecture relates to all the group axioms of arithmetic, along with the principles of elementary calculus and the principles of Euclidian geometry and the bilateral symmetry of the Cartesian grid.
I would suggest that the true gist of Goldbach lies in the principles of universality and reversibility that underlie the entire fabric of human logic and mathematics.
Example: Perfect square 25 = perfect square 4 plus semiprime 21=prime 3 x prime 7. Try a few billion others ( and don't forget those identity elements are also perfect squares)
And this all can be seen by using the group axioms and operations to see that every even integer can be rearranged as a model of the standard numberline. for example, the even integer 8:
0 1 2 3 4 5 6 7 8
8 7 6 5 4 3 2 1 0

I discovered a recent paper that offers a good literature overview on Goldbach's conjecture (2N=p+q, p,q=primes). It can downloaded at free from: http://vixra.org/pdf/1205.0108v1.pdf
Although it does not provide the complete mathematical proof, it shows many interesting numerical results such as an estimation of the pairs (p,q) that fufill the conjecture, which is shown to increase with N. I feel that this work may inspire some other researchers.

Consideration in favor of Goldbach's Conjecture

Please read the following ArXiv paper on this topic:

Is it a proof?

No pairs were "discarded." Persons considering a solution to this Conjecture are chiefly interested in general cases, not special cases where prime1 equals prime2. The investigations listed above and below your comment explore cases where the even number's prime flanks are equidistant from the even number's half. For example, for 14, the primes are 3 & 11 (each is the same distance from 7). For 38, the primes are 7 & 31 (each equidistant from 19); and for 122, the primes are 43 & 79 (each equidistant from 61)...though there are other Goldbach pairs. This problem is so fascinating, I can't see why some mathematicians say its solution is trivial or irrelevant. On one site, someone wrote that pursuing it was a total waste of time! END

I have found an interesting result after looking at the Goldbach Conjecture.

Looks like a simple "proof" to me but I guess it may not be given this has eluded the mathematical world to date.

Anyway, I would like to get it reviewed by an expert in the field. It only uses two sides of A4.

If any expert in the field is interested in reviewing this, please send your e-mail address to maccagraham@hotmail.com

As shown in a recent paper (March 2013), see http://pubs.sciepub.com/ajma/1/1/2/abstract.html#.UYUcBEqSnRg, not only one but a minimum number of prime pairs (p,q) that fulfill the relationship 2n=p+q can be estimated using a very simple formula. Moreover, the centroids of triangles based on the triplets (6k-2,6k,6k+2) closely follow the average number of representations (also a simple formula).

Odd primes presumably means different primes. (rather than all the primes except 2, i.e. odd numbered primes)
Thus I fail to see how the number 6 (an even number greater than 4) can be partitioned into 2 odd primes. Unless of course you are considering the number 1 as a prime.
Of course 6 can be partitioned into 3 and 3 but then where does the 'odd prime' clause come in?
So I would word the conjecture in one of two ways -

Forgive me my ignorance... and thanks for the great article

Odd prime simply means any prime apart from 2. So in the case of 6 we have 6=3+3. Admittedly it's a strange way of formulating things, saying "odd prime" rather than "prime not equal to 2", but it's quicker to say!

aha - all primes except 2

Thanks for your reply, that's clear now.
My understanding is only very elementary, but these articles offer great insight.
Number 2, utterly simple yet so inexplicably awkward. Duality seems intrinsic to all of the universe and even contributes to the complexity of the GC. That is, we're proving a condition for a multiple of 2, concerning 2 numbers, neither of which will be multiple of 2.
Thanks again

where is the calculator???

The calculator mysteriously disappeared from this page :(

Where is the goldbach pairs calculator?

HOW TO CREATE THIS PROGRAM IN C#

how to create this kind of goldbach calculator in c# program ???

anyone can help me plz...

Any idea how to program the conjecture in a TI-84 calculator, yielding the pairs of odd primes given any even number greater than 4 and less than or equal to 4x10^18?

1 is not prime, and the conjecture states that even numbers cab written as the sum of two primes.

It's clearly stated in the

People have told me that every number above 7 is made by three prime numbers can you prove it with the odd numbers between 60 and 90?

1 is not prime, and therefore the conjecture must be any number greater than 4, NOT 1!!

to the person above who wrote 1 is not prime - it's also not a whole even number - which
are essential parts of the conjecture.

what they are saying is 2

what they are saying is 2 can't be a solution because 1+1 is the only way to add up to 2 they don't know the modern form or the fact that 1 was considered prime for a long time.

"to the person above who wrote 1 is not prime - it's also not a whole even number - which
are essential parts of the conjecture."

Of course 1 isn't even, but no one is talking about decomposing 1 into the sum of primes, silly. The point regards the decomposition N = P + 1, where N is even and P is prime. That won't do because 1 isn't prime.

1 used to be included in

1 used to be included in primes. It isn't anymore because the definition of "prime" changed. Look it up.

Does not disprove the conjecture.

There are infinitely many

To the 9th Class student of bvrsss, the number you gave is a Mersenne prime. It may be the largest Mersenne known up to the date you found it, but that is not true now, they find a new larger one at the rate of about once a year, it is now above 2 raised to the (77,232,917) -1. There can never be a largest prime. Euclid proved that. You can use the GIMPS algorithm (The Great Internet Mersenne Prime Search algorithm to find a new Mersenne prime, if you are so inclined. The 50th one was found in 2017 by Jonathan Pace using GIMPS day and night fo fourteen years.

I am surprised that on the internet I cannot find this statement, which is more general than the Goldbach Conjecture, such as:
Statement:
Any integer number divisible by integer k can be represented as the sum of k prime numbers.
Let A = k * C, | k, C ∈ N, k > 1, C > 1 | =>
∃ p1, p2, … pk that A= ∑pi where pi – prime number.
Assuming the Goldbach Conjecture to be actually true, proof of the above is easily performed by mathematical induction.

Someone wrote: Any integer number divisible by integer k can be represented as the sum of k prime numbers.
This is simply stating in the trivial case for P prime : k.P=P+P+P+...+P, k sums of the same prime.
If P in above sum is not prime, it can be broken up into its prime factors and you get a sum of primes again.
So the above statement is basically the same as the breakup of a number into its prime factors and has not to do with the Goldbach conjecture.

how can 3 be the sum of two primes? unless 1 is included?

The conjecture only applies

The conjecture only applies to even numbers and 3 isn't even.

Goldbach Conjecture for 6 and 50

1 is not a prime number (by

The same idea holds true for 4:

Yes, you may have learnt that 1 is not a prime number, I totally agree.

I learnt that too.
But what type of number would it be then?
A special number???