Maths in a minute: The Riemann sphere 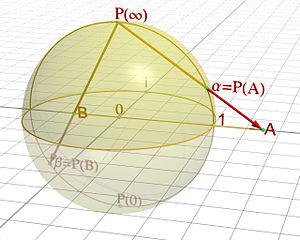 is an example) and again they may not be defined at every point because you have division by 0. However, by treating infinity as an extra point of the plane and looking at the whole thing as a sphere you may end up with a function that's perfectly tame and well behaved everywhere. A lot of complex analysis, the study of complex functions, is done on the Riemann sphere rather than the complex plane.
Read more about...
stereographic projection
Riemann sphere
Maths in a minute

So I can divide any number by

So I can divide any number by 0 then??

Yes, you can do that on the

Yes, you can do that on the Riemann sphere, which contains a point we can call infinity. however, division by 0 is still undefined if you are working with the number line or ordinary complex plane.

This is exactly the kind of

This is exactly the kind of explanation I was looking for

Thank you very much

North pole of the sphere must be vertical to the plane. And the line touching only the north pole would be tangent to the circle, and this tangent would be perpendicular to the radius of the sphere touching that point (North Pole) , which means the line touching the north pole only would be parallel to the plane (I mean to the line on the plane vertically below it) and the distance of it from the plane would be equal to the radius, always. So unless the radius of the sphere is equal to 0, or the plane is not flat, the line will never touch the plane, which means there is no point 'infinity' on the plane! Or is it that, that very thing is called infinity? I mean, is the point that never comes infinity?? Or am I wrong?? Is the actual matter quite different????????? Please help....

You are correct. No point on

What would result from the Riemann sphere if it could be reduced to a single point at the northern pole? I guess my question is how to interpret the sphere as it collapses to a point, and then becomes a plane with orthogonal projections?

I am taking complex analysis

I am taking complex analysis this semester and couldn't understand this. Thank you for making it clear.

Distance between 0 and infinite

What is the distance between 0 and infinite on Riemann sphere?